Pizza: Is any food in our country more universally beloved? Show us a person who doesn't like pizza, and we'll show you a person fundamentally left out of one of the basic rites of American social life. Salty, savory, hot and gooey, pizza satisfies our appetite without challenging our palate. (Let us here turn a blind eye to Japan, where typical pizza toppings include squid and corn, as well as to Americans' own peculiar penchant for topping "Hawaiian" pizzas with pineapple.) Pizza is meant to be shared -- or at least it was, until the dubious invention of the personal pizza. Even so, the very word "pizza" seems to connote easy good times. Without the need for serving utensils or separate dishes -- or, indeed, any utensils or dishes at all -- pizza is a meal unto itself that is as casual as it comes. It is the food of game nights, of college dorms, of families too busy to cook.

With such a ubiquitous role in American casual culture, no wonder pizza varies so much in quality, from greasy pizzeria pies and cardboard frozen discs to gourmet flatbreads dressed up with toppings like aioli and Brussels sprouts.

All of which brings us to ... Aspinwall. Here, on the leafy north shore of the Allegheny, chef Matthew Porco recently served the last meal at his fine dining destination, Mio Kitchen and Wine Bar, and opened -- you guessed it -- a pizzeria.

Mio Pizza's bright lighting and stark black-and-red color scheme are the polar opposites of Mio Kitchen's erstwhile candle-lit golden glow, and the presence of a few tables doesn't disguise the storefront's orientation to the takeout and delivery markets.

But we weren't there for Porco's interior design; we were hungry to taste his genius in the kitchen. He might not be tossing every crust himself, but the fact that those crusts came in traditional or whole wheat was just one of Porco's signatures on this modern pizzeria menu. Another was this admonition regarding custom pizza toppings: "For the integrity of the pizza, we recommend no more than three." The integrity of the pizza. We felt humbled.

Our first taste was a promising one. The Mio Classico on whole-wheat crust, topped with San Marzano tomatoes, mozzarella, parmesan and fresh basil, was superb in its simplicity. The whole wheat contributed hearty depth of flavor and robust texture to the crust, rather than mere health-food virtue, while the sweet tang of the tomatoes, the creaminess of the mozzarella and the nuttiness of the parmesan melded into the very essence of pizza's deliciousness.

Jason worried that grease might overwhelm flavor in the Mio Carne, topped with pepperoni, sausage and salami. How wrong he was. The pepperoni was chopped up to prevent its spiciness from dominating the other flavors, including mildly sweet sausage and exceptionally rich salami. Best of all, a heavy covering of chopped basil was enough to act almost as a vegetable rather than an herb, its peppery sweetness balancing out the heaviness of the meat. After sampling the traditional crust on this pie, we recommend the whole wheat unanimously for its satisfying flavor and ideal balance of crisp and chewy texture.

We also relished the buffalo-chicken calzone, an inspired combination of hearty crust, melty cheese and frankly spicy chicken, with thick, chunky blue-cheese dressing alongside. Many pizzerias fail when reusing their pizza crust for calzones, resulting in a foldover that flops, but Mio's calzone was highlighted by a crisp, substantial crust that was more than adequate for its filling.

Mio's take on the classic Italian hoagie was good, too. The bread was noteworthy for being crusty without threatening the gums, while the same salami we'd enjoyed on the carne pizza was combined here with a high-quality ham to tasty effect. We appreciated that the classic red-vinegar dressing was served on the side, although Jason noted that the two halves of the sub offered a radical difference in heat of the banana peppers.

Unfortunately, the one disappointment of our meal was a doozy. Mio's Caesar salad consisted of the standard combination of chopped romaine, croutons and pulverized Parmesan, plus whole anchovies. Chopping the anchovies would have distributed their potent flavor better throughout the salad, and white ones would have been a milder choice. But far more dismaying was the worst Caesar dressing we've ever tasted. A sludgy, dun-colored blend of more anchovies and not nearly enough of the garlic, lemon, Worcestershire and olive oil necessary to balance them, it ruined the salad: a glaring shortcoming.

But other than that? With its updated traditional menu and premium ingredients, Mio offers pizza, calzones and hoagies that rise above the humdrum of ordinary storefront fare, befitting the involvement of a professional chef. 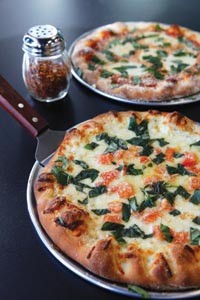