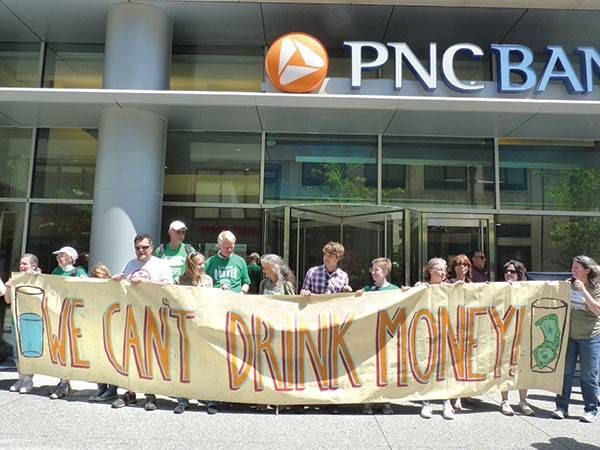 Eileen Flanagan is no stranger to executives at PNC Bank.

Flanagan, of the Philadelphia-based environmental group Earth Quaker Action Team (EQAT), appeared at an April PNC shareholder meeting in Tampa, and as recently as October, stood outside the bank's Downtown headquarters and bank branches with a single demand: Stop funding companies that engage in mountaintop-removal coal mining (MTR).

Now she and other environmentalists, including Kumi Naidoo, executive director of Greenpeace International, plan to protest outside of PNC's Downtown headquarters on July 3 (the time has not yet been set). EQAT gave PNC until June 1 to stop funding MTR companies or face the July protest. The protest coincides with the annual Quaker Friends General Conference, held at California University of Pennsylvania the same week.

Meanwhile, a group of investors is trying to change PNC's environmental policies from the inside.

"We have people — both Quakers and non-Quakers — from across the country who are fired up about coming to town and holding PNC accountable for this destructive practice," Flanagan says.

MTR is a form of strip-mining practiced in West Virginia and elsewhere. The process lops off the tops of mountains to get the coal beneath; dislodged rock is frequently dumped into nearby valleys. Environmentalists say the process harms wildlife, drinking water and community health.

PNC has long publicized its environmental agenda, touting the green-building principles being used in the Tower at PNC Plaza project currently underway Downtown. And in 2010, the company announced that it would no longer provide financing to "to individual MTR projects" nor to "coal producers whose primary extraction method is MTR."

But environmentalists say little has changed, in part because there are no coal producers who use MTR as their principal extraction method. The environmental group Rainforest Action Network (RAN), which issues an annual report card on banks' energy policies, found that in 2013, PNC provided $211 million to companies engaged in MTR, and that PNC ranked seventh among 12 banks for financing firms that used MTR. (The financing was for companies that engage in MTR, but not necessarily for specific projects, which PNC's policy forbids.) That's far less than the $687 million in financing PNC provided in 2012, when it ranked third among lenders supporting MTR businesses, but RAN attributes the drop to a decline in coal demand and other business factors.

"We think [the 2010 pledge] was always intended to be a smokescreen," Flanagan says.

PNC largely declined comment for this story, instead pointing to the "green-banking practices" section of its Community Responsibility Report. The bank invests in alternative sources of power, the report says, and provides lower fees and interest rates to small businesses making "environmentally-friendly decisions."

In addition to challenging the company on the streets, environmentalists hope to hit PNC in its own wallet. EQAT has also been asking PNC customers to close their accounts: To date, it says, $3.5 million has been divested. And for the past two years, investment firm Boston Common Asset Management, which owns shares in PNC, has proposed a climate-change resolution to be voted on by PNC shareholders.

Boston Common says it invests based on "rigorous analysis of financial, environmental, social and governance factors." Its resolution would require PNC to provide an "assessment of the greenhouse-gas emissions resulting from its lending portfolio and its exposure to climate-change risk in its lending, investing and financing activities."

Lauren Compere, who works in shareholder engagement with Boston Common, says, "There seem to be two sides" to PNC's environmental stance. "They focus on green building and real estate, but offer no sector-specific guidance around high-risk energy sources outside of mountaintop removal, which appears to still be an issue." In addition to mountaintop removal, Boston Common has taken issue with coal-fired power plants and fracking.

Boston Common's resolution came before stockholders twice but has been rejected both times, garnering just 22 percent support in 2013. A PNC spokesperson told City Paper via email that "we have no comment on the resolution" other than noting that "shareholders decisively rejected the proposal" previously.

Compere says while the resolution did not pass, the attempt over the past two years has helped to open the lines of communication between the bank and the investment company. "There is a willingness" now, Compere says, to begin having discussions about their concerns.

"We hope to have more strategic conversations with the bank about where they have real risk and real opportunity to invest in renewable energy," Compere says. "And I do believe that conversation is about to happen."