"The thing I got swept into, which I still really love, is hanging out in record stores with people telling stories." 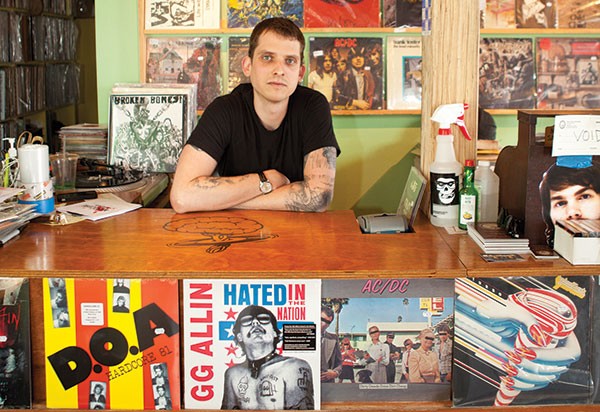 Photo by Heather Mull
Records with a side of history: Mind Cure' s Mike Seamans

Some kids dream of becoming professional athletes, or getting signed to a record label. Mike Seamans was called up to the majors, in a manner of speaking, when he was still just a teenager, and it was a dream come true — but it was a very limited sort of stardom.

He had developed a habit of hanging out in record stores around Pittsburgh — places like Jerry' s, and especially Paul' s CDs, in Bloomfield. When one Paul' s employee was leaving town, he told Seamans that owner Paul Olszewski wanted to talk to him.

"When I think about it, this literally changed the course of my life," Seamans says. "I went down on a Friday afternoon, and I went up to Paul and said, ‘Randy said you wanted to talk to me?' And he said, ‘Yeah, do you wanna come down on Sunday, just hang out? I' ll pay you.' And I said ‘Sure!' "

What started as a Sunday-afternoon gig turned more serious over the summer, and soon enough, Seamans realized this was where he wanted to be. That' s what set him on the path toward running Mind Cure Records, his Polish Hill vinyl-oriented shop, which celebrates its third anniversary this weekend.

"The thing I got swept into," says Seamans, "which I still really love, and has dictated what I do, is hanging out in record stores with people telling stories. Talking about bands that I wish I could have seen; people telling you about the Electric Banana. There was always this mythical way in which people talked about stuff that had happened."

After years of working at Paul' s, studying urban planning at Pitt and moving to Washington, D.C., for a few years with his now-wife, Seamans doubled down on the idea of opening his own shop in the late ' 00s. "When I lived in D.C.," he says, "there were a few new record stores that had just opened up, about the size of [Mind Cure], and I thought, ‘Maybe I can do this!' I' d fantasized about owning a record store before, but I always figured it would be something like, Paul would sell the store."

Upon his return to Pittsburgh, he started to work on finding a spot for the store, at first planning to buy a building. Then, he found the Dobson Street building where the shop currently is, and worked out a deal in which he splits the space with Lili Coffeeshop (on the first floor) and Copacetic Comics (on the third).

Mind Cure focuses on vinyl — both new and used — and largely on a few genres. Seamans says at first he set out to be all-encompassing, like Paul' s was.

"I realized really quickly that it' s really hard to do," he says. "One of the reasons Paul' s was amazing, and one of the reasons he kept us all around, was that we all had our own different interests. And when it' s just me, it' s hard — the stuff I' ve known really well is more punk, heavy metal, rock stuff and some weirder things that are tangential to that: noise records, that kind of thing."

The other thing Seamans is focusing on more is history. In keeping with the idea of the record store as a place to hang out and swap stories, he' s begun a few projects to help keep local music history alive. He revived Mind Cure Records — the store' s namesake, a punk label run out of Pittsburgh in the ' 80s by Dave Martin and Half Life' s Mike LaVella. He' s planning a series of reissues, the first of which was the first original Mind Cure release, the LP by LaVella' s band Real Enemy. Upcoming are reissues of records by Savage Amused and The Battered Citizens.

He' s also working on a documentary series about the punk era in Pittsburgh, interviewing figures like LaVella, Mind Cure Records' Dave Martin, Johnny Banana of The Electric Banana, and touring musicians, including members of Black Flag. It' s like a film version of the record-store experience: people who were there when something big (or something they think was big) happened, all telling their slightly different versions of how it went.

Of course, it' s not all about the past: Mind Cure Records is also looking ahead with a year-long series of monthly 7-inch releases featuring current local bands; each will contribute one original song and one cover. Zeitgeist will be featured on the first, released in tandem with the store' s third anniversary. Each single will also have an accompanying online video about the band.

"There are all these teeny micro-scenes in Pittsburgh, and I' ve gotten to know a lot of people through the store who I wouldn' t otherwise know," says Seamans. "The idea isn' t to say Pittsburgh' s the most important place or whatever. It' s just to show that these things are happening. I think we aren' t always the best at checking out things that are outside of our circle."

As someone who studied urban planning, Seamans, who bought a house in Polish Hill years before the store ever opened, understands the role a record store can play in creating and sustaining community — both among neighbors and among those with an interest in music. Mind Cure, as part of the Dobson Street complex with Lili and Copacetic, provides a place to gather and chat, just like record stores everywhere have done for years. And as an entity that' s preserving history and archiving the current music scene, it' s filling what might even be a more important role.

"None of this happened in a vacuum," Seamans notes. "The history of it is very important. Say this is the first hardcore band in Pittsburgh — well, why did it happen then? I' ve always been interested in that kind of music history."