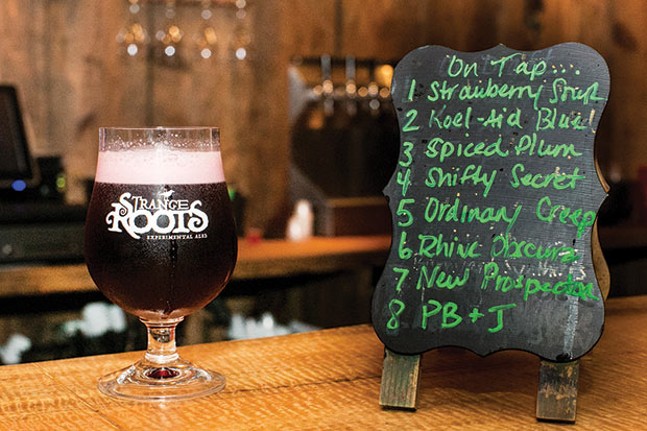 I fell in love with Draai Laag years ago after sampling a few funky, Flanders-style ales at its Millvale taproom. But as it turns out, beers with tasting notes like “horse blanket” have a somewhat limited appeal. Last month, Draai Laag officially relaunched as Strange Roots Experimental Ales, making the brewery far more accessible and a whole lot easier to spell.

“You see a Draai Laag beer on the shelf and, without even actually looking at the beer, you identify it and say ‘that’s probably a sour beer,’” explains founder Dennis Hock. While sours are gaining popularity among American craft-beer drinkers, it’s still a niche market. And after seven years of exclusively making Belgian-inspired sour and wild ales, Hock and his team were ready for a change. “We love sour beer … but from a creative perspective, we were kind of limiting ourselves.”

Though he initially considered launching a second brand to market those “defunked” beers, Hock realized they lacked the resources to support a separate brand. So, after talking to customers and distributors, Hock decided to go all in and change the name entirely. “We wanted to tip the cap to Draai Laag, and Draai Laag has always been a strange little brewery,” he explains. “We figured that’s our roots — Strange Roots.”

Hock estimates that about 10 percent of Strange Roots will be dedicated to “traditional” beers that continue in the style of those they brewed as Draai Laag. About 70 percent will be what Hock describes as “softer” sours: approachable, lower-alcohol beers without the heavy funk of many of their previous offerings. The remaining 20 percent or so will be forays into entirely different styles, such as hefeweizens and IPAs. But even these more familiar styles will embrace the experimental aspect of their name. Barnyard Synthesis, for instance, is an IPA fermented with Brettanomyces, a yeast strain that balances hop bitterness with a bit of earthy richness.

The new beers also come with a new place to drink them. At its Gibsonia brewery (where the team has brewed since September 2017), Strange Roots is adding a colorful taproom offering 12 drafts that show off the new range of options. Though it will open without food, Hock hopes to eventually add a kitchen, and is exploring options for opening a sizable beer garden as well. For now, though, you’ll have to head to the Millvale taproom to experience all the weird and wonderful things brewing at Strange Roots. At press time, an opening date for the Gibsonia location was still pending, as Hock waited on final permits from the township.

Whether you drink it in Millvale, Gibsonia or one of the dozens of states where Strange Roots beer is distributed, expect to see as much experimentation and passion as ever. As Hock gushes, “I love beer, and I’ll love beer till the day I die."