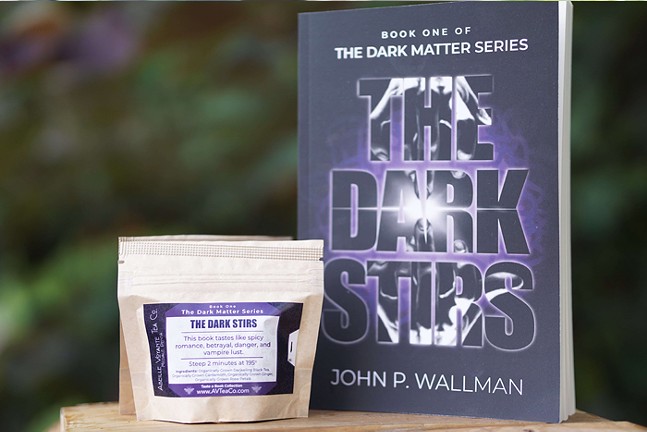 Photo: Courtesy of Courage Publishing
The Dark Stirs book and tea
A collaboration between a local tea shop and a novelist sucks. Literally.

The Millvale-based Abeille Voyante Tea Co. launched a new tea blend paying tribute to The Dark Stirs, the debut vampire horror novel from local author John P. Wallman. Described as capturing the "subtly spicy allure" of the book, the Dark Stirs Tea Blend was launched on June 28 during a special tasting and signing event for the book at Abeille Voyante.

The tea is available to purchase at the Abeille Voyante shop at 211 Grant Ave. in Millvale.

The book came about through a partnership between Lexi Mohney, who released The Dark Stirs through her Courage Publishing company. Set in Baltimore, the first of a four-part series is described in a Courage Publishing synopsis as following a man and woman who join forces to take down a killer vampire. "Lexi was in one of the writing groups (maybe her group?), and she mentioned she was starting her own publishing company," Wallman tells Pittsburgh City Paper over email.

Mohney says she decided to work with John because she "liked the way he portrayed his vampires." She says she also liked that Wallman "had a direction for the whole series" that would unfold across four, already drafted books. 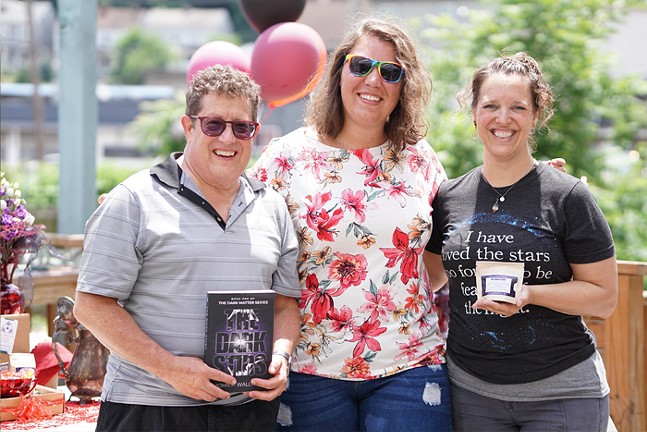 "The tea experience was a team effort, of course," says Mohney. "Through reading the book, we each had an idea of how it felt to be immersed in the world John had created. It eventually came down to translating those feelings into flavors."

She adds that the tea contains "a little romance (rose), a saucy heroine (cardamom), some detective work (Darjeeling), and, of course, a vampire bite (ginger)."

Wallman and Mohney will continue promoting The Dark Stirs at various events throughout the Pittsburgh area. On Sat., July 23, Wallman will appear at Antique Moon Emporium in Allison Park and at Café Conmigo on Aug. 6 in Wexford.

"As for working with John, it's been a long labor of love," says Mohney. "We've miraculously made it through the craziest history-making times the modern world has ever seen, and I've watched a writer fulfill his dreams and blossom into a published author. It's been a joy to witness."