“I love the schedule in your back pocket all day, folded up,” says Paul Bossung, one of the festival’s lead coordinators. “You’re pulling it out all day going ‘Where are you going?’ But having an app, you can plan out things in advance and make your own schedule.”

With the addition of the app, Millvale Music Festival (MMF) joins the wave of festivals — Bonnaroo, Electric Forest, Snaky Beats, Coachella — that create an app solely for use leading up to and during the festival. Schedule changes, emergency information, updates, and more are available in one place.

In addition to the app, Millvale Music Festival will add TV screens in many of the venues.

“There will be live information [on the screens],” says Bossung. “‘Here’s the acts coming up, and did you know you can catch a shuttle at these locations?’ GPS tracking on the schedule, and stuff like, 'Grab your 50-50 tickets to benefit the Boys and Girls Club.'”

These changes come after surprise storms botched a slew of outdoor festivals in Pittsburgh last year. When thunder, lightning, and torrential downpours rolled through Thrival Festival in Sept. 2018, attendees were left in the rain for hours with no word on when the activities would continue. Millvale had a similar experience when a storm blew through in the middle of the day.

“We learned a lot of lessons about how to communicate,” says Bossung. “Being able to have the app — all the venues will be synced up with that — we can push the information. And we have these screens out with info. You can post on Facebook or Twitter as much as you want, but people aren’t all going to latch onto it.”

Both the app and TV screens were created with help from Work Hard Pittsburgh and Academy Pittsburgh.

Communication isn’t the only thing getting revamped. Last year, an entire street of art and live street performances found a home at the festival. This year, on top of those additions, is a comedy stage, a spoken word stage, and an enormous mural that will be debuted at the festival. MMF teamed up with Hemispheric Conversations: Urban Art Project (HCUAP, pronounced, “hiccup”), that brings artists in from different states and countries. Aerosol artists from Chicago, Pittsburgh, and Leon Guanajuato, Mexico are spray-painting a 50-foot-long, 30-foot-tall mural on a local Millvale business that will stay up until the owner decides otherwise.

“We've got a lot of traditional murals that tell the story of the town or that business, and this is just art,” says Bossung.

Those who have attended Millvale Music Festival in the past may also have noticed the lineup diverges from previous years. Boasting over 200 acts — last year had 150 — the team chose out of almost 500 submissions. 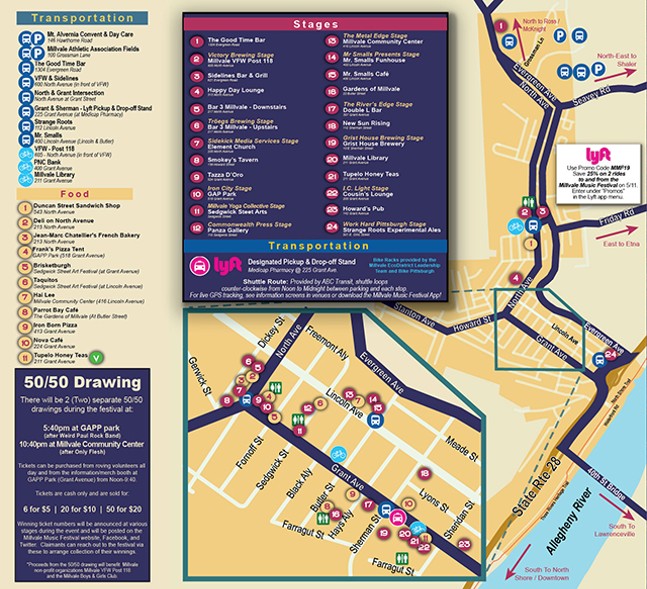 Millvale Music Festival 2019 Map
“We’ve even gotten to the point where we try not to repeat artists two years in a row,” says Bossung. “Some artists are a little frustrated with that because they play year one, and then we say, 'Well we’re not going to have you back here because we're trying to get new and fresh artists the exposure that they deserve.’ It’s a balancing act, honestly.”

Bossung pointed out a few acts he’s going to try and catch during the day: Gene The Werewolf, Chase and The Barons, Nightly Standard, The London, and Fuck Yeah Dinosaurs.

Millvale Music Festival is set to be a smoothly run but exciting day for both its attendees and those performing and running things behind the scenes.

Because of that, MMF is pushing rideshares, biking, and public transportation.

“We’re right on the bike trail from anywhere in town,” says Bossung. “We’ll have a Lyft code – MMF19 – for 25 percent off up to two rides that day, as long as they’re coming into or out of the Millvale area.”

And if you forget, you can find that information and more on the app and TV screens located throughout the festival.