Yet another underdog sports tale that hits every predictable base, but fails to score 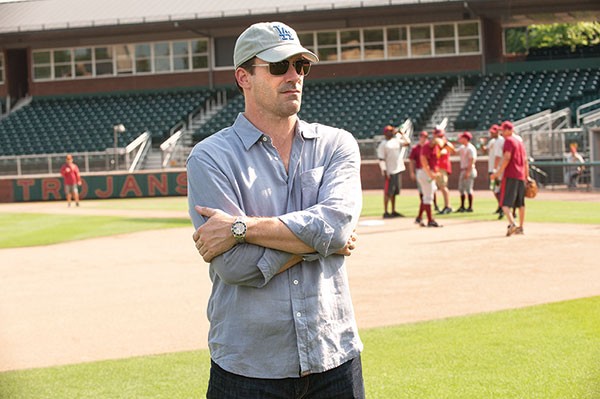 A struggling sports agent named J.B. Bernstein (Jon Hamm) works a gimmick: Hold a contest in India to recruit a pitcher or two from among the country's cricket enthusiasts, then reap the publicity in two countries when these newly trained Indian players are signed by an American baseball team. This is the plot of Craig Gillespie's overly long Million Dollar Arm, yet another underdog sports tale that hits every predictable base, but fails to score.

The focus is on Bernstein, which deprives the viewer of the potentially more interesting stories at the periphery. I'm less interested in a sports agent learning to be a marginally better person than I would be to watch this tale from the perspective of the nascent ball players. (2008's indie drama Sugar delivers a much more provocative look at what it means to be beamed from the Third World to play baseball.) Likewise, Bernstein's love interest (Lake Bell) has little to do except work on his self-actualization, with the odd sideline in nurturing the two young players.

It's "based in real events" and promoted as a "feel-good" tale, so there's not much suspense about the outcome. Though if you know the real story, you'll be a bit amused how Arm disingenuously wraps up, with no update on what the two Indian recruits are doing today.