Photo: Dove Shore
Mikel Jollett
When talking about cults, often, it's the details about life inside the group discussed — the rituals, the abuse, the sex. But what about life after a cult, and the longstanding trauma that the person carries with them? In Mikel Jollett's debut memoir, Hollywood Park, The Airborne Toxic Event lead singer lays bare his explosive upbringing after escaping the Church of Synanon cult at the age of five.


Hollywood Park, which is broken into three parts, opens with Jollett's mother waking him and his older brother, Tony, in the middle of the night. The three of them are leaving Synanon, a drug-recovery program-turned-cult that placed children in a "school" away from their parents at only six months old. The school was essentially an orphanage, and the Jollett brothers were left in the care of various cult members while rarely seeing their parents.
click to enlarge 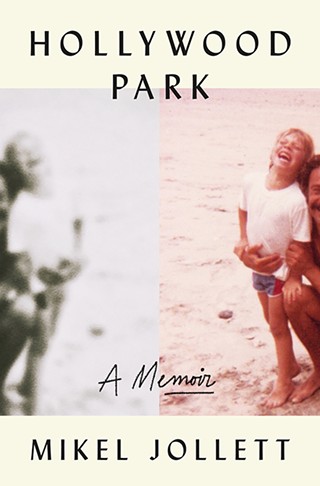 The story is told from Jollett's perspective over the years, the first part from the eyes of a child who knows his mother struggles with "deep-Russian" and hates "thatasshole Regan." It's clear that Jollett's memory is strong; at one point, he describes watching another escaped Synanon member get beaten unconscious.


Jollett's mother, Gerry, is unstable and creates a toxic parent-child relationship. "Boys are meant to take care of their mothers," she tells him constantly. Tony acts out with reckless abandon and ends up in rehab as a teenager, dropping out of school. Jollett only sees his father, an ex-heroin addict who met Gerry when he went to Synanon to get clean, about half of the year. Yet, he is the only semi-stable thing in Jollett's life. Hollywood Park refers to the horse track in California where his father would take Jollett and his brother for father-son outings.

Jollett's life is marked by a series of horrendous events that reads like fiction — I didn't want to believe someone could go through the jarring, trauma-inducing experiences that he did. The memoir deals with instability, the effects of careless caretakers, how it feels to live in a bubble and to suddenly have it popped, and the little moments that can push someone toward a different path — a path of success.

Hollywood Park is out now via Celadon Books. Music was a driving factor in Jollett's life and as a member of The Airborne Toxic Event, Jollett created an accompanying album and playlist to pair with the book.

Goodlander to host block party in Larimer with cocktails, live music, and more