In Pittsburgh, our statue game is pretty solid. 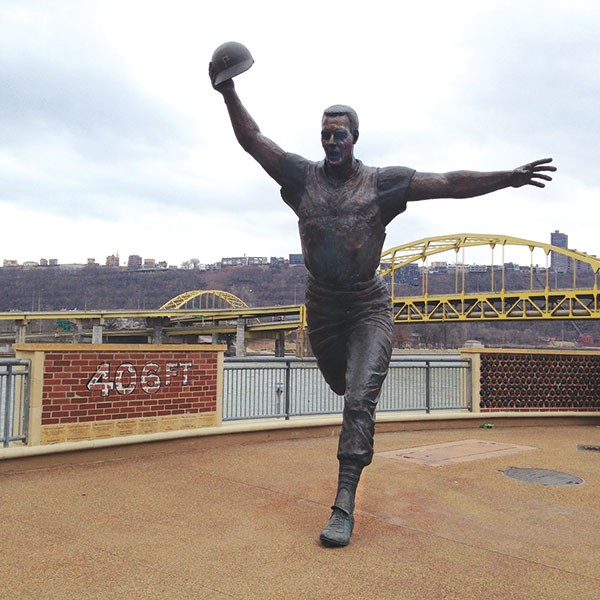 CP photo by Lisa Cunningham
Susan Wagner's Bill Mazeroski sculpture
There are various ways of measuring success. But if your achievements are so great that you get your own statue, that’s not just success — that’s a legacy. In Pittsburgh, our statue game is pretty solid. If a new study came out entitled, “Best Cities for Sports Statues,” we would not only be on it, but pretty close to the top. But even within our own statue community, there’s a hierarchy. Here’s my ranking for your perusal, and let the controversy begin!

7. Honus Wagner. The most traveled of the statues is also the oldest. Unveiled in 1954, in Schenley Park, the Wagner has been moved to Three Rivers Stadium and now rests just outside PNC Park. It’s the one you see kids sitting on while they look at their phones before a game. A modest statue made before we made athletes bigger than life.

6. Franco Harris. Franco welcomes visitors from all over the world at the Pittsburgh International Airport. It’s odd in that it’s the only statue on the list that is painted. The piece depicts the exact moment when the fortunes of the Steelers organization changed forever. Number 32 is immortalized next to another superstar, George Washington. And while Washington might be the father of our nation, the Franco still out-selfies our country’s first President at the airport.

5. Art Rooney. The Chief sits right beside Heinz Field, on a bench. The statue practically invites you to sit right next to it, as it conveys his renowned kindness. It’s also the only statue with a cigar in it. Rooney routinely received cigars as gifts from Frank Sinatra. That might even be better than a statue. If Cleveland ever put up a statue of its longtime owner Art Modell, it would be of him packing his suitcase and heading for Baltimore.

4. Bill Mazeroski. This tribute captures the elation of Maz the day he made the Yankees cry. The greatest moment in Pittsburgh sports, and perhaps, Major League Baseball history is immortalized in a 14-foot, 2,000-pound piece of bronze. It’s a monument to giant-slayers everywhere. They should add to the statue by putting in the fans who ran onto the field to round third base with him on that glorious afternoon in October 1960. (The Maz was sculpted by local artist Susan Wagner, who also sculpted No. 3 and No. 1 on this list.)

3. Roberto Clemente. The Clemente statue sits at the end of the bridge named after him, down the road from the museum dedicated to him. In fact, it’s not even the only statue of the Great One in the country; New York and New Jersey also have statues of him. Not to mention the high schools and middle schools, a state park and a stadium named after him. The statue, like him, is great and shows him heading to first base after one of his 3,000 hits.

2. Mario Lemieux. The grandest of them all, “Le Magnifique” is 10 feet tall, 13 feet wide, and weighs 4,700 pounds. It’s unique that even his statue shows him dominating other people: The two losers depicted getting burned by Mario are Rich Pilon and Jeff Norton of the New York Islanders. Those players are skating toward the past, when the Islanders won four Stanley Cups, while Mario is on his way to four cups — two as a player and two as owner.

1. Willie Stargell. This is the best because it doesn’t show what Willie has done, it shows what he is about to do. Captain Willie is about to crush a fastball like the one he knocked completely out of Dodgers Stadium, or the one where he cracked a plastic seat in the upper deck of Veterans Stadium, in Philadelphia. After the wrist-windmill batting routine, Willie would lean back slightly and wait to smash one of his 475 home runs. If you stand behind the statue at night, a street light from Downtown looks like a belt-high fastball he is about to destroy. Willie is the only one who could hit them into the cheap seats.

Pittsburgh filmmaker needs your Roberto Clemente stories, memorabilia, and photos for a new documentary on the iconic Pirate