Even the most cynical Steelers fans are optimistic about the upcoming season. Loaded with offensive firepower, a good mix of young and old players, and a schedule where five of the final seven games are at home, the Steelers are one of 31 teams looking to prevent the Patriots from smugly holding up another Lombardi Trophy. For the past two seasons, I have predicted the Steelers’ record and been off by a single game each year. So, get ready to place your wagers as we look into the future … all the way to 2018.

DeShone Kizer wrested the non-coveted job of Cleveland Browns starting quarterback from the former Mr. Hype, Brock Osweiller, during the preseason. It’s hard to tell them apart — they both have surnames that sound like German staff sergeants in an episode of Hogan’s Heroes — and it really doesn’t even matter who they put under center. Cleveland fans hope to build on last year’s single-win season and get their hopes up early. Le’Veon Bell is a bit rusty from skipping training camp and promptly fumbles on the first possession. Cleveland takes advantage and jumps to a 3-0 lead. Unfortunately for Cleveland, it’s the highlight of the season. Martavis Bryant and Antonio Brown each haul in two touchdowns as the Steelers roll to a 35-10 victory.

The Minnesota Vikings fragile signal caller, Sam Bradford, gets injured early after a ferocious hit from rookie T.J. Watt. Teddy Bridgewater runs in to replace him, but gets hurt before reaching the huddle. The Steelers, meanwhile, let James Conner get some carries, and he scores on a 30-yard romp to lead the Steelers to 2-0 with a 27-16 win.

Mitch Trubisky, the second overall pick in the 2017 draft, gets his first start with the Bears. Trubisky, from Cleveland, starts off hot, then lets his inner Clevelander get the best of him. Artie Burns picks him off before the half and runs it back, damaging Trubisky’s confidence. The Steelers look a little flat, but simply outperform Chicago in a 20-10 triumph.

Every year, the Ravens/Steelers games are close. The trend is not broken this season. The Steelers suffer their first loss of the year in a 33-27 overtime defeat. Safety Sean Davis gets burned by Mike Wallace late in the fourth to send the game into OT. Panic ensues in Steelers Nation about the credibility of the secondary. Calls for Jordan Dangerfield to be named the starting safety flood local sports-talk shows.

A bounce-back win over the pathetic Jacksonville Jaguars calms everybody’s nerves. Ben Roethlisberger throws for 475 yards, and Antonio Brown has to come up with three different touchdown dances. The Steelers move to 4-1 with a 49-13 rout.

The Steelers get a little too overconfident after the Jacksonville mauling and lose on the road in Kansas City, 17-13. This is the low point of the regular season, but luckily it’s only October. Head coach Andy Reid moves to 11th on the all-time NFL win list. Next up for Reid is Sewickley native Chuck Knox.

Ben Roethlisberger injures himself early in the game. Ben tries to outrun Vontaze Burfict to the sideline and winds up crashing into Adam “Pacman” Jones’ parole officer. The NFL investigates why the Cincinnati Bengals are allowed to have several POs on the team’s sideline. Nevertheless, Bell and Conner each rush for 100 yards as the Steelers move to 4-2 with a 25-14 win. 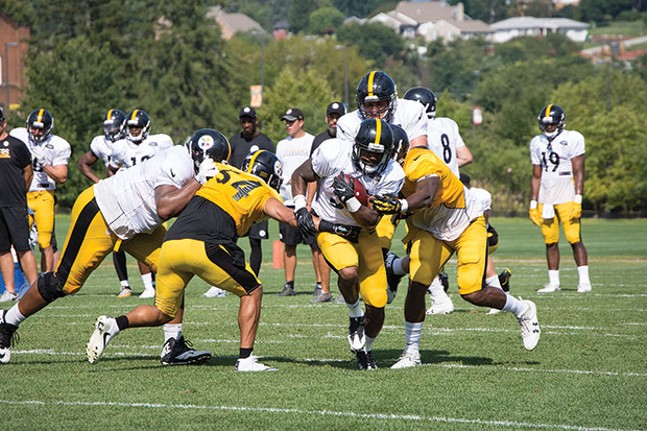 Detroit’s Matthew Stafford gets sacked seven times as the Steelers defense shows emerging signs of dominance. The Steelers roll to a 31-17 win as Bell rushes for 208 yards and three touchdowns. The Steelers hit the season’s halfway point at 6-2.

Following the Steelers’ bye week, New Castle’s Malik Hooker picks off Roethlisberger twice as the Indianapolis Colts jump to an early 14-point lead. Sales of Hooker jerseys skyrocket in Indiana. Martavis Bryant finally starts playing like a man who is not on drugs. Bryant goes off, catching 12 passes for 185 yards and two touchdowns. The Steelers come from behind for a 36-33 victory. Steelers Super Bowl songs begin to saturate the market.

Just like in the Stanley Cup finals, Pittsburgh defeats a proven loser from the Volunteer state. Mike Mularkey has his Titans looking respectable, and Marcus Mariota starts living up to the hype. Until — you guessed it — Willie Gay intercepts him and returns it for another touchdown. The Steelers have a tough time with Tennessee, but ultimately prevail with a 29-21 win.

The four-game winning streak comes to an end against Green Bay, as it appears the Steelers were tired of winning. The secondary gets all the blame that is not directed at Mike Tomlin. The Steelers slip to 8-3. Green Bay 30, Pittsurgh 19.

A fight during the pregame warm-up gets players from both sides ejected before the coin toss. There is blame on many sides, many sides. Cincinnati jumps out to a big lead after Andy Dalton finds A.J. Green on two deep touchdown passes. But the Bengals Bengal themselves by celebrating a victory before it happens. A roughing-the-passer penalty by Pacman Jones set the Steelers up inside Cincinnati’s red zone with under a minute to play. The Boz, Chris Boswell, nails the game-winner as the Steelers celebrate a 24-21 win.

The Ravens are the opponent again, and it’s another close game. JuJu Smith-Schuster gets the winning touchdown midway through the fourth quarter. The 17-13 win puts the Steelers at 10-3.

Tom Brady’s confidence spills over into arrogance as the Steelers get the best of him. It’s only the third time they have ever beaten the pretty boy in 14 games. The look of defeat on Brady’s face is enough to make Steelers fans giddy with schadenfreude. A 35-31 thriller gets the “Here we go” chants to a deafening pitch.

It’s another Christmas with a Steelers game to watch. Pittsburgh celebrates the holiday by trouncing the stupidly named Houston Texans 38-10. A five-hour documentary on the Watt brothers precedes the game. At 12-3, the team announces that playoff tickets will go on sale this week.

It’s New Year’s as the Browns wrap up yet another woeful season. Even with Pittsburgh resting its starters, the Browns still don’t put up a fight. James Conner and Darius-Heyward Bey each scores as the team shows off its depth. The Browns go home to prepare to make their annual terrible draft pick in four months. Steelers 25, Browns 3.

The Steelers get the No. 2 seed in the AFC and have a bye week.

The Steelers play the No. 3-seeded New England Patriots. Pundits and know-it-alls from all over the football sphere predict another victory for Brady, especially since the Steelers already beat him earlier in the season. But it’s fake news. The Steelers win again, knocking the defending champs off their throne with a 20-17 win. Cam Heyward’s jarring hit on Brady causes the fumble that leads to the playoff win.

The euphoric victory over the Patriots leads to the inevitable emotional letdown as the season comes to an end. The Oakland/Los Angeles/Oakland/Las Vegas Raiders stun the Steelers 20-13, as Marshawn Lynch runs over the defense. The season ends at 14-4, with two wins over New England. But at least the Patriots don’t win another one. The Raiders don’t win either, as Pittsburgh native Mike McCarthy leads his Packers to a win over the Raiders in the Super Bowl.

Wysocki: The Pittsburgh Pirates won’t be able to turn it around without a major trade