I did the math on a giant chalkboard, Good Will Hunting-style 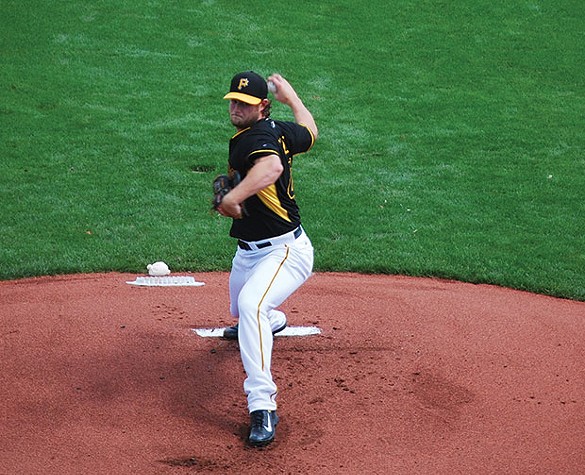 In less than a month, we’ll be able to spend a brisk spring evening watching the Pirates at PNC Park.

As your eyes roam around the stadium, as they’re wont to do during the one or two boring moments of a baseball game, you always notice the retired jerseys of past players. Pirates like Honus Wagner, Ralph Kiner, Willie Stargell and Roberto Clemente: guys who were so good that nobody is ever again worthy of wearing that number. But something stands out among that group — not one of them is a pitcher. If you go by archaic stats, Wilbur Cooper is probably the best pitcher in Pirates history, but he pitched more than 100 years ago, and only to white guys whose dads fought in the Civil War. So who are the best starting pitchers of, say, the past 50 years? I, along with The Cheap Seats sabermetric team, invented a formula to find out.

To qualify, the pitcher must have won 50 games. Gerrit Cole will reach that with his third win of the year. So we’re making an exception for him, or else there wouldn’t be anybody from the PNC Park era. Sorry Tom Gorzelanny, Zach Duke and Paul Maholm — none of you made the list.

Three old-school stats (wins, earned run average and games started) were combined with three relatively new stats (walks and hits per innings pitched [WHIP], strikeout-to-walk ratio and strikeouts per nine innnings) and three sabermetric stats (adjusted ERA, fielding independent pitching [FiP], and wins against replacement), with a 10th category for postseason performance. The all-time rankings of the qualifying pitchers were tabulated (I did the math on a giant chalkboard, Good Will Hunting-style). I assigned 10 points for first on the list all the way down to one point for 10th. The numbers were crunched and re-crunched, and I’m now proud to present the 10 best starting pitchers of the Pirates’ past 50 years.

If you wish to argue, a member of my stats team will be at the Shop’n Save in Carrick on Friday afternoon.

9. Jerry Reuss is one of two pitchers to win 200 games without ever winning 20 in a season. He was just remarkably steady for a long time. If anyone cares. Reuss won 61 games as a starter in a career that spanned from 1969-1990. Weirdly enough, he left the Buccos in 1978 and bounced around for 12 seasons before returning to Pittsburgh for four games in 1990.

8. Bruce Kison’s first year with the Pirates was 1971. He went 6-5 and took home a World Series ring. His last year as a Pirate was 1979. He went 13-7 and put a ring on it again. This guy knew exactly how to make an entrance and an exit. Kison nailed down 81 wins during his tenure and went 5-1 in the postseason.

7. Bob Walk won one more game as a Pirate than Kison did and pitched when it counted. Walk is forever remembered in Pittsburgh lore for tossing a three-hit shutout against the Braves in the 1992 NLCS to stave off elimination. And yes, that is the only instance the word “stave” has ever been used in modern journalism.

6. Jim Rooker is best known for his 300-mile charity walk from Philadelphia’s crappy cookie-cutter stadium to Pittsburgh’s crappy cookie-cutter stadium. As an announcer, Rooker proclaimed that he would walk home if the Pirates blew a 10-0 lead against the Phillies. He wasn’t counting on Phillies shortstop Steve Jeltz to hit two home runs. After all, he hit only five in his career. Rooker is less known for winning 83 games as a Pirate from 1973-1980.

5. Gerrit Cole might not be in Pittsburgh much longer, so go see him while you can. Cole ranks high in FiP, BB/K and K/9. He’s pitched four seasons in Pittsburgh and has been on only one losing team. He’s the Pirates’ first legitimate ace in 25 years. Cole is also the only pitcher on this list who was born after The Simpsons went on the air.

4. Dock Ellis is one of those guys known only for one thing — the first admitted use of a drug that was not necessarily performance- enhancing. His LSD no-hitter in Hollywood is legendary. Ellis also once hit the first three Cincinnati Reds with beanballs; again, legendary. Dock won 96 games as a Pirate and started the 1971 All-Star game.

3. Steve Blass doesn’t rank high in a lot of stats except for wins and games started. But nobody else on this list or any team’s list has done what Blass did. He won Game 7 of the World Series on the road, against the defending champion Baltimore Orioles, by throwing a complete-game four-hitter. Blass is best known for “Steve Blass Disease” after mysteriously losing the ability to throw strikes. But 103 big-league wins and a Game 7 victory isn’t the worst disease you can get.

2. Doug Drabek was perfect for Pittsburgh in the 1990s. He looked like he could’ve lived in Crafton. He had the best non-hockey mullet in Pittsburgh sports; Drabek could’ve worn stonewashed dad jeans when he pitched and it would’ve looked normal. The Texan racked up 92 wins and a Cy Young Award, all under Jim Leyland. He’s the last Pirate to win the award, and really nobody has come close since.

1. John Candelaria looked like he could have been a “Sweathog” on the 1970s TV show Welcome Back, Kotter; every one of his baseball cards looked like a mugshot. But the results are in, and it turns out that the Candy Man could and did. Candelaria was the 1970s. He was turned away by the Dodgers when he showed up to a tryout wearing a shirt with a picture of weed on it that said, “Try it, you’ll like it.” The Dodgers’ loss was the Pirates’ gain. The Candy Man tossed a no-no, won a World Series and 124 games for the Pirates — the most in the post-Forbes Field era. He might not have been Wilbur Cooper or even Bob Friend, and his jersey will never be retired, but here at the Cheap Seats, the Candy Man gets the respect he deserves.