The schedule, the opponents and even the travel favor the Black and Gold. 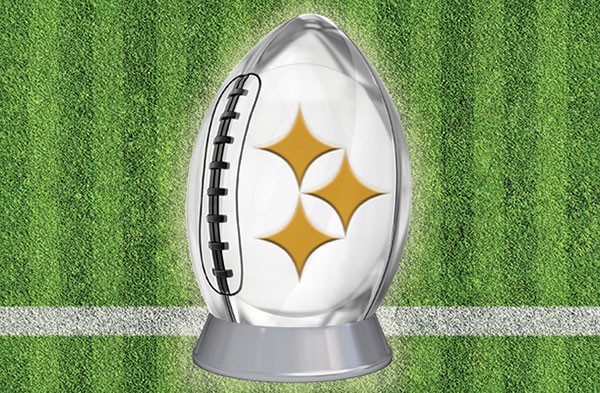 It looks like the upcoming Steelers season has the potential to be a really fun and successful one.

Every major family holiday can be spent watching a Steelers game this year. There are contests on Thanksgiving, Christmas and New Year’s Day, plus the bye week is Halloween. The schedule, the opponents and even the travel favor the Black and Gold. The Steelers play the NFC East, which produced only one winning team last season. Besides Cincinnati, only four other teams on the schedule won more games than they lost in 2015. For traveling fans, every away game is in the Eastern Time Zone. Last season, “The Cheap Seats” predicted an 11-5 Steelers season, missing by just one game. So listen up, degenerate gamblers, here’s how the season will go.

Week 1: at Washington. Get ready to hear the phrase, “Antonio Brown makes an incredible catch for a touchdown” a lot this season (probably in 10 or 11 games). In this one, he hauls in two as the Steelers roll 27-17. After the loss, Washington owner and all-around-jagoff Dan Snyder announces he’s firing the head coach. Jay Gruden is let go, and Snyder hires his ninth coach in 18 years.

Week 2: Cincinnati. The Bengals jump out to a quick 20-0 lead and promptly begin to over-celebrate. The Steelers come back and humiliate them in a 37-20 shellacking of the defending AFC North champs. The Bengals show some discipline in this game, however, and are flagged for a mere three questionable late hits and one ejection.

Week 3: at Philadelphia. Maybe it was overconfidence from the last game, but the Steelers drop their first game of the year, 16-13. For some reason, the Steelers haven’t won in Philly since the Steelers had Steelerettes. Fitzgerald Touissaint, who caused a running-back controversy by over-achieving during Le’Veon Bell’s suspension, fumbles late, ensuring that Bell’s job is safe.

Week 4: Kansas City. Bell is back in full swing and extremely relaxed as he runs all over the Chiefs defense for a 26-10 win. The Steelers are now 3-1 after a standout game by the beleaguered secondary. Some older fans report being uncomfortable saying the last names of cornerbacks William Gay and Ross Cockrell, but they should stop being so close-minded.

Week 5: New York Jets. Jets fans have finally accepted the fact that they are losers. Only Beaver Falls’ own “Broadway Joe” Willie Namath could make a winner out of this organization, and it hasn’t happened since he left. Even though they were 10-6 last year, the Jets are heading back to loser town after a 24-9 loss to the Steelers. The Steelers are now 4-1 as they head into South Beach.

Week 6: at Miami. The Dolphins’ last appearance in a Super Bowl was when they played the Eagles in Ace Ventura: Pet Detective, and even that was 25 years ago. In real life, it’s been more than 40 years since Miami has won it all, and those guys are obnoxious about it. OK, 1972 Dolphins, we get it — you had a perfect year. The remnants of that team celebrate annually when the last undefeated team loses. The Steelers faithful cram into the Dolphins’ stadium and enjoy a three-touchdown performance by Antonio Brown. Steelers 38, Dolphins 14.

Week 7: New England. The Big Showdown starts with a celebrity sighting: Patriots coach Bill Belichick is seen shopping at Gabriel Brothers in West Mifflin. The Patriots spend the week spying on the Steelers’ practice and deflating their balls, and win 13-10 after three calls that all suspiciously go Tom Brady’s way. The Steelers are 5-2.

Week 8: at Baltimore. The Steelers put sightseeing plans in Baltimore on hold as they focus on their biggest rival. It’s close again as the Steelers leave “Charm City” with a 13-10 overtime victory. After the game, a drunken brawl outside the stadium results in the Ray Lewis statue getting accidentally shot at. The Steelers are now 6-2, as Maurkice Pouncey has avoided injury all season.

Week 9: Dallas. Plastic-faced Chris Christie’s hug buddy, Jerry Jones, brings his sad-sack excuse for a team into Pittsburgh. No hugs today as the Steelers are 44-21 victors. De Angelo Williams, Markus Wheaton and Ledarius Green all score, and even Landry Jones plays OK in some mop-up work.

Week 10: at Cleveland. Clevelanders are still dealing with the completely foreign sense of pride since the Cavaliers ended the city’s championship drought. Unfortunately for them, LeBron doesn’t play for the Browns, and they once again realize they still have nothing to be proud of. Cleveland becomes mathematically eliminated from the postseason. The Steelers, a 32-13 winner, move to 8-2.

Week 11: at Indianapolis. This is a Thanksgiving nightmare as nothing goes right and Indianapolis prevails 27-10. Andrew Luck beats the secondary all day, as Steelers fans collectively worry about the team’s defense. The 8-3 Steelers head back to Pittsburgh.

Week 12: New York Giants. Willie Gay gets another pick-6 to add to his underappreciated collection. The Steelers win 21-18 and move to 9-3 on the year. Despite that, Steve, from Butler, and Jeff, from Sharpsburg, both call into a local radio station to say that the Steelers should fire Mike Tomlin.

Week 13: at Buffalo. A 150-yard game by Shady McCoy isn’t enough for the Bills, as a 19-12 Steelers win dampens any hope Buffalo has of making the playoffs; 1999 was the last year Buffalo had a postseason game. With the Bills out again, Buffalo begins looking forward to, well, nothing.

Week 14: at Cincinnati. Prior to the game, the Bengals honor their 2006 team. That team had the distinction of having more player arrests than victories in a single season. Lifetime Achievement winner Adam “Pac Man” Jones emcees the reunion ceremony. Bengals fans openly sob as the Steelers stick it to them again with a 20-19 last-minute-field-goal victory. The Steelers clinch the AFC North, ending the Bengals’ long one-year reign as champion.

Week 15: Baltimore. The starters rest for this one as Baltimore wins it 22-20. Landry Jones throws three picks as an emergency starter. Ben Roethlisberger is being rested and Bruce Gradkowski injures himself during pre-game warm-ups.

Week 16: Cleveland. The Steelers finish 12-4 with their annual win over Cleveland at home, 30-16. Cleveland gets the second pick in next year’s draft and promises to do something stupid with it as usual. The Steelers get the second seed and enjoy a week off before the playoffs.

Postseason: The magic ends in the first game. They can’t all be happy endings as the Steelers are upended 16-14 by the defending Super Bowl Champion Broncos. The stifling and experienced Denver defense proves too much. The Steelers clinched early and played no meaningful games down the stretch, and it hurt them. Steve and Jeff call into the local radio shows to drop the “I told you so.”