His replies to Monkees questions aren't as forthcoming as his comments about his output following the Pre-Fab Four. 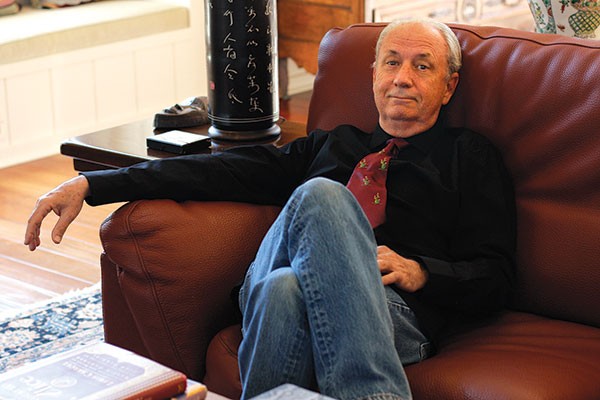 So much more than a Monkee: Mike Nesmith

Mike Nesmith's four-decade career encompasses some of the earliest combinations of country and rock, video experiments that paved the way for MTV, film direction, novels and the multimedia production company Pacific Arts. For a mere three years of that time, he was also in The Monkees.

That might explain why his replies to Monkees questions — he conducts interviews only via email — aren't as forthcoming as his comments about his output following the Pre-Fab Four. How did last year's tour with fellow Monkees Peter Tork and Micky Dolenz come together, after years of polite declines from Nesmith? "We decided to do it," he answers simply. It "feels like the end game — a resolution of sorts — and feels like it makes people happy. Does me."

Then again, Nesmith is embarking on his first solo tour in about 20 years. The only Monkees song in his set will be "Papa Gene's Blues," a countrified nugget from their first album. The rest of the night focuses on his work with The First National Band and his solo projects. Considering he's released more than 15 albums, it makes sense for him to focus on this vast part of his catalog.

Nesmith, who recently turned 70, knew what his career would be from a young age. "From the first time I heard music, I have never heard anything else. So it is the informing element of all thought for me — even literature, prose and narrative sing a silent song to me as I read them. Same for speeches, conversation and the sounds of nature. It is one continuous symphony."

His earliest singles (recorded under the name "Michael Blessing") went in a folk direction, while his contributions to The Monkees often featured a blend of Southern twang with the pop-song format. But Nesmith writes he never had one style that truly defined him.

"I like country music — especially the blues nature of it and later the rock element," he explains. "But I don't see the lines of genre. I never know one from the other until I am way off in the margins. Sometimes I will start with your ‘Your Cheatin' Heart' and end up with Tito Puente — don't ask me how I got there. But it's always a ‘top-down/tune-up' trip."

By the time he left the Monkees, in 1969, and started The First National Band, "country rock" had become a recognized style thanks to The Byrds and Gram Parsons. But Nesmith writes that he wasn't really tuned into that. "I hadn't met [The Byrds] and hadn't really heard them. I was up to my neck in Monkees, and FNB was the first step out of that. So [bandmates] John Ware and Red Rhodes and John London and I locked ourselves away and learned all these songs that had been laying around. I had no notion of country rock."

After years of being dismissed for his work with The Monkees, it appeared that the time might have been right for acceptance, but the early days of The First National Band were met with "lots of ridicule and outright laughter at us as we played," he recalls. "It was hard traveling. No approbation — quite the reverse." Nevertheless, the group scored several minor hits such as "Joanna" and "Silver Moon."

Nesmith's songwriting style has always seemed a bit more poetic than a lot of either pop or country music at the time. The Monkees song "Daily Nightly," for example, depicted the riots on the Sunset Strip, wrapping them in almost surreal metaphorical phrases. Nesmith is probably the first and only country singer to title a song with a nine-dollar word like "propinquity." "Words and music run through my head most of the time — very nice to have them," he explains. "And most of the time I just listen and write down what seems salient and new to me. Songs are also a great way for me to express affection, so I try to understand and use the feelings as they arise. This sometimes makes for sweetness, sometimes for thoughtfulness, and sometimes silliness. I never know. I just follow the songs along."

His 1977 song "Rio" was turned into a film, which inspired Nesmith to create PopClips, a Nickelodeon show that was the predecessor of MTV. Around the same time, he created Elephant Parts, a long-form video of songs and comedy sketches which earned him a Grammy. He also served as executive producer on the films Repo Man and Tapeheads.

Nesmith admits he sometimes has a lot of ideas in his mind at once. "The directions of thought are infinite — as far as I can see whichever way I look," he writes. "Sometimes an excursion down these avenues is just like a walk in the park, to relax and enjoy the surroundings. Sometimes they turn into a music video or Elephant Parts or MTV. Right now all roads seem to intersect through the net and beyond."

And regardless of age, Nesmith is intent to keep on creating. "I write a little every day," he states, "and the music plays in my head non-stop."