Mike Daisey faces the dark side of his beloved Apple devices. 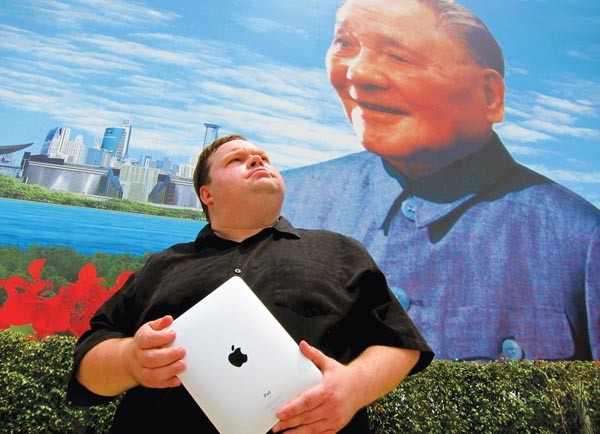 The Agony and the Ecstasy of Steve Jobs

Ever since his childhood, in small-town Maine, Mike Daisey has loved digital technology. He's a particular fan of Apple products — the sort of person, he says, who frequents online Mac forums "as a way to relax."

A few years ago, someone on a forum posted photos, found on an iPhone, of the interior of a Chinese factory that made iPhones. The images were innocuous, unpeopled; workers had simply forgotten to erase test images taken with the devices. But Daisey was fascinated.

"I found them riveting and kind of dreamlike," he says, by phone from New York. "I realized I had never thought about where my electronics come from."

An obsession grew that in 2010 took Daisey to China, to see for himself the factories where Apple — like many of the world's consumer-electronics suppliers — does its manufacturing. Circumventing tight security, he says, he managed to interview workers. Then, weeks after his return, Daisey, the acclaimed monologuist behind such shows as Monopoly and 21 Dog Years, debuted The Agony and The Ecstasy of Steve Jobs.

The personal but widely ranging monologue about the dark side of Apple was a critically lauded hit at New York's Public Theater last fall. It comes to the Byham Theater on Sat., Jan. 21, co-sponsored by the Pittsburgh Cultural Trust as part of The Andy Warhol Museum's Off the Wall series.

Awkwardly for Daisey, Agony and Ecstasy opened in New York five days after Jobs died. But despite its title, the two-hour show is about much more than the tech visionary whom Daisey has called "the only hero I ever had."

It's also about the distance between us and the electronic gadgets we hold so close. Daisey points out that until the late 1990s, though it's hard to believe today, all Apple products were assembled in the U.S. Like so many firms, Apple was drawn to China by the "special economic zone" there, offering unbeatable economies of scale.

Now, few Americans could name the cities where their electronics originate — cities like Shenzhen, where Daisey visited. Just as few understand that those sleek digital machines are actually made by hand — and that many of those hands belong to children. In China, child labor is routine; so is abusive overtime, at plants like the one Daisey visited, run by a company called Foxconn: "While I was in country, a worker at Foxconn died after working a 34-hour shift."

More broadly, Daisey excoriates how the U.S. relates to China — the unholy alliance of international capital and Chinese authoritarianism that powers our consumer economy. "We're in bed with a country that's facist, run by thugs," he says. "There's an enormous amount of denialism in the country right now about our relationship with China, and our relationship with our objects. It's not just that we don't want to think about it; it's that we've worked really hard, for a long time, to bury it."

Yet Agony and Ecstasy is no harangue. Daisey — whom Wall Street Journal drama critic Terry Teachout has called "an awesomely gifted stage performer" — can be funny, charming and self-effacing even as he fires devastating critiques at targets as sacrosanct as Jobs.

"I'm talking a lot about how Apple started out being a company run by pirates — really established as dedicated to a kind of anarchy — and it changed from that to being the most locked-down tech company of its age," Daisey says. He cites, for instance, the way iPad users can install only programs from Apple servers. "I've been a huge fan of Apple, so to me it's been personally painful to kind of watch them change from the values they had when I was a young person and I was first using their devices to the values they hold now."

Live theater might seem an anachronistic way to address the hyperconnected world Apple has made. But Daisey — who watched Occupy Wall Street rise even as Agony and Ecstasy packed in audiences across town — thinks physical gatherings are necessary cultural "ignition points." They're perhaps especially good at highlighting the fact that our piles of gizmos depend on the suffering of anonymous factory workers half a world away.

"Understanding that is really integral if we're even going to attempt to live an ethical life. I'm not suggesting what we do about it in every situation. But I do know that not even knowing that it's happening is definitely part of why the situation is often abusive in these special economic zones, because we're literally asleep even as we consume.

"What's interesting is how we don't see it. That's what I'm compelled by," he says. However, he adds, "Once you make people aware of it, they often can't stop thinking about it. They can't not see it."