Mike and Doug Starn show how too much light can unnerve. 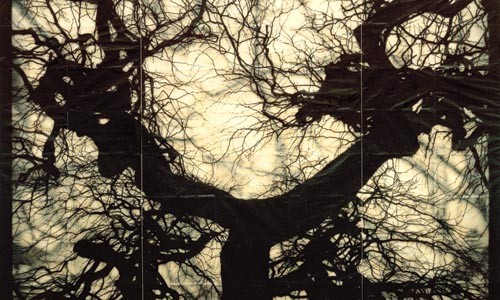 Moths, blind monks, swampy arbors, solar flares replicated by fiery electrical currents and metal bars -- this is the stuff of nightmares, especially when displayed in a gutted Victorian factory.

Before you enter Gravity of Light, a smiling attendant will hand you a waiver to sign. "I acknowledge that the carbon arc lamp emits ultra-violet rays and develops about 45,000 watts," it reads. "I agree to wear, and return for other visitor's [sic] use, the Ultra-Violet [sic] filtering glasses provided ..."

As it turns out, 45,000 watts creates a very, very bright light. Said carbon-arc lamp actually consists of two rods that share an electrical current, which heats up the rods and -- bling! -- becomes the brightest blaze this side of Mars. The lamp burns at the far end of the Pipe Building's exhibition space, a blinding white flame. The Strip District building's interior is voluminous, with high ceilings, craggy brick walls and treacherous floors patched with blocks, wood and sand. The lamp casts shadows across the floor and adds ominous texture to every surface. Compared with that retina-incinerating light, everything else looks pale and subterranean.

The lamp is used by Mike and Doug Starn, a pair of identical twins and New York-based artists. Gravity of Light is their creepy, colossal installation, an homage to the existence of light. "Light is thought, light has gravity, light is what attracts us," they write. "It is the future and the past."

Well, sure. But what the Starn brothers do not mention in their printed statement is what kind of light they're worshipping -- and this is the Halloweenish pleasure of their work, part of the Pittsburgh International Festival of Firsts. If they were a little happy-go-luckier, the Starns might have focused on light as photosynthesis, light as joy, light as magical beams piercing clear Mediterranean water. But that isn't their bag. The Starns prefer a light that's, well, darker.

Their gigantic photographs hang on the walls, quilted together from smaller sheets of inkjet prints. In "Attracted to Light 1" and "Attracted to Light G (grid)," we see big, hairy moths, blown up by hundreds of times, an optical zoom that maximizes their bigness and hairiness. "Black Pulse 3 & 17 (lambda)" depicts dead tree-leaves in mid-decay. These aren't lively green leaves, nor do they boast autumnal yellows and reds; these leaves are decomposing, crumbling, losing their materiale piece by microscopic piece.

"Ganjin" is a quilted photograph that could fully cover the side of a rowhouse; if you're not current with your medieval Chinese monks, Ganjin was an eighth-century Buddhist missionary who happened to be blind.

Most spine-tingling of all is "Structure of Thought 5 & 6," picturing a tree of coiled branches and vines, laid starkly black against a parchment-colored background.

Moths, blind monks, swampy arbors, solar flares replicated by fiery electrical currents and metal bars -- this is the stuff of nightmares, especially when displayed in a gutted Victorian factory. Never mind the safety goggles you are advised to wear and the "disclaimer" you're required to sign. Thematically, the Starn brothers seem drawn to a dimmer sense of light -- the light of coal-mines, football fields and hydroponic gardens. We may hear the word "light" and think of sunny beaches, but the Starns must imagine halogen lamps in gravel pits. In Iceland. In February.

The Starns' world is so vivid and all-consuming that I caution against reading their Project Description. "These rays of interrelation result in an impressive synesthesia," read the notes. "The eternal and the ephemeral are revealed not only as false dichotomies, but as necessarily dialectical relationships."

This is the kind of academic hocus-pocus that has no place in such a gritty environment. Instead of contemplating eternity and ephemeralness, imagine that you've closed your eyes and you are dreaming what the Starns dream. Overall, it's a peaceful dream -- nothing bad will happen, no primeval tentacles will fly out of the dark -- but it's also a dusty, dizzying vision. Just because you've stepped into the light doesn't mean you can see where you're going.