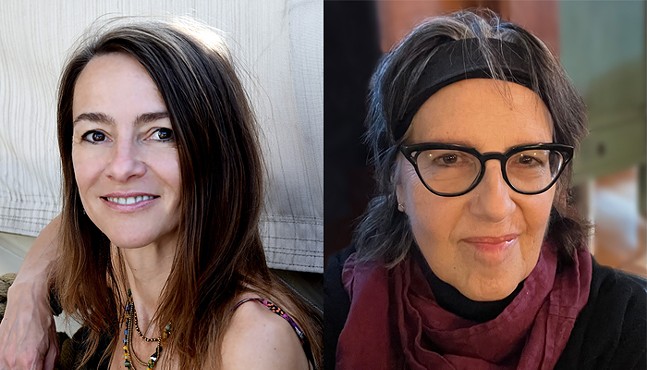 For the first 18 years of her life, Mihaela Moscaliuc grew up under Communist rule in Romania. Judith Vollmer’s childhood was spent in Level Green, a pastoral suburban tract between Trafford and Penn Township in Westmoreland County.

The odds of them meeting seem impossibly long. But poetry, as it often does, brings people of diverse backgrounds together. Moscaliuc and Vollmer, who appear Thu., June 23 in a virtual event sponsored by Pittsburgh Arts & Lectures Made Local series, have become close friends after participating in low-residency programs at New England College and Drew University.

While she is married with children and still has relatives in Romania, Moscaliuc says that “my true family here in the United States is the family I met through and became a part of through poetry. And Judy is my sister, my soul sister.” 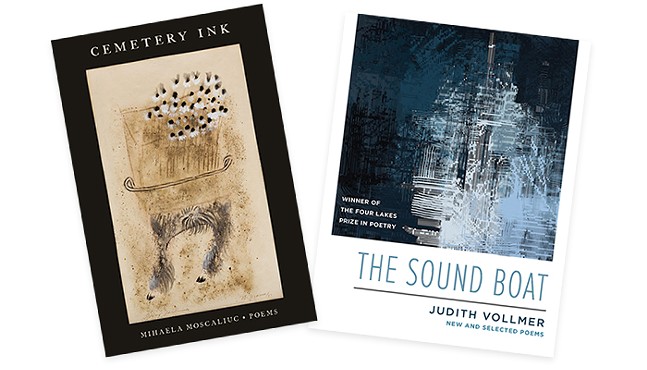 Moscaliuc’s most recent book of poetry, Cemetery Ink (2021), was published by the University of Pittsburgh Press. The Sound Boat (University of Wisconsin Press) is Vollmer’s new collection featuring new poems and selected poems from her catalog.

While poetry has cemented their friendship, the paths they took to writing are divergent. Vollmer grew up in a household where books were plentiful. Her mother, the late Marie Vollmer, was an avid reader and longtime teacher at St. Regis School in Trafford, even though she didn’t attend college until she was 37.

“She fell in love with British romantics,” Vollmer says of the mother. “There was always a book on the porch or in the kitchen, and she was reading Wordsworth or Blake and Coleridge.”

Moscaliuc’s romance with poetry was delayed until she emigrated to the U.S., and even then, it took 10 years for her to start writing. She first drew inspiration from the music she had heard in Romania: Leonard Cohen, the Rolling Stones, Bruce Springsteen.

“Then I fell in love with the music of the English language,” Moscaliuc says, “where I clearly knew what everything meant. I never wrote while I was in Romania.”

Moscaliuc recognized that the rhythms of those musicians mimicked some of the first poets, notably Michael Waters and Gerald Stern, that she heard read.

“Music was so vivid and so fresh and so enchanting to me,” she says. “I think American poets brought the rhythm of music and poetry together for the first time.”

Both poets explore the textures of their homelands in their new collections. Moscaliuc wrote a series of poems about her former home in Iasi, Romania, in Cemetery Ink.

And Vollmer has long been a keen chronicler of Western Pennsylvania. The Sound Boat includes poems from past works including 1990’s Level Green, which won the Brittingham Prize in Poetry. A new poem, Pittsburgh Maps, takes an unusual look at city sites including the West End Overlook and Speck Street, “named for the pigs of Pig Alley” in the city’s Brighton Heights neighborhood.

Both poets acknowledge that poetry is reactionary, and because of its portability and compactness can quickly respond to contemporary events. Vollmer points to groups including Cave Canem and how there currently is a tremendous renaissance occurring in American poetry.

“Those voices are excruciatingly present,” Vollmer says, adding “the muse is always on alert in the way, the muse is always paying attention. So, as writers, if we are awake to something or awakened by something, then the poem is going to happen.”

But the epicenter of poetry right now may be in Ukraine. Moscaliuc has been tracking poet Katie Farris and her husband, Ukrainian-American poet Ilya Kaminsky, who have been posting about Ukrainian poets.

“In the midst of bombings, in bomb shelters, while their cities are being shelled, Ukrainian writers have been responding to that not by finding consolation,” Moscaliuc says, “but finding a way to sustain hope in the humanity and in life.

Kaminsky, Moscaliuc adds, contacted a number of Ukrainian poets and asked how they could help.

“One of them wrote back, `Putin's come and go. If you want to help, send poems.’”