With its comfortable, casual atmosphere and expertly prepared food, the new Mighty Oak Barrel is a worthy successor to the old Oakmont venue

For awhile, the charmingly named Mighty Oak Barrel was a word-of-mouth favorite, offering some of the region’s best food and wine in a surprisingly nondescript building tucked into a humble neighborhood of riverside cottages beyond the Oakmont business district. Part of its charm was this hidden aspect, which — in the pre-Urbanspoon era — allowed everyone who dined there to feel like they had discovered this delicious secret themselves.

Eventually, the Mighty Oak Barrel closed, and its owners moved on to other ventures. Recently, however, a new restaurant has opened in the old spot under the old name, but with a distinctly new personality. Gone are the dim lighting and plastic grapevines draping the dropped acoustical ceiling tiles. The reopened dining room is brightly lit, the better to display the local art that’s a cut above typical coffee-shop fare. Black tablecloths set off brightly colored Fiestaware dishes.

And as for the menu, where the old Mighty Oak Barrel was ahead of its time — seasonal and bold when those were still rare qualities in the local scene — the new venue is more of a throwback, with chops and pasta dishes, all pretension-free. Nothing here is cutting-edge, but neither is it boring, for example, grilled salmon with avocado-tarragon butter. 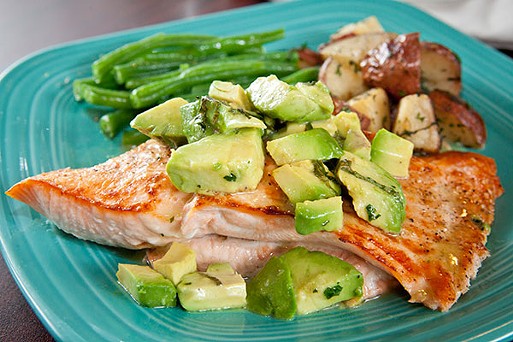 Indeed, lack of pretension seems to get at the heart of new owner Michael Flowers’ vision. Flowers, an Oakmont native who’s worked at the renowned Oakmont Country Club as well as a few of the area’s fine dining spots, seems to be looking to affirm the Oak Barrel’s neighborhood vibe. Thus, while the menu includes refined dishes like seared duck breast with blood-orange sauce, the atmosphere is warm and welcoming, not cool and professional.

Bacon-wrapped shrimp, a riff on that canapé classic, bacon-wrapped scallops, was served with horseradish aioli. Firmer and less buttery-sweet than scallops, the shrimp could stand up to such an assertively flavored sauce, and their texture was close to perfect, plump, not dried out. The bacon was great, too, crisp at the edges but mostly tender. This was supposed to be a shared starter, but it was so good, it would have been easy for one person to devour it all.

Duck confit and fig flatbread was topped with diced fresh figs, instead of the fig spread we often see in this application. The fruit firmed up a bit in the oven, maintaining its distinct flavor, which complemented the rich, moist shredded duck, the sweet caramelized onion and a blend of mozzarella and gruyere that was flavorful and gooey. A bit too gooey, truth be told; while normally we can’t get enough melted cheese, here we thought less could have been more, revealing rather than muting the wonderful flavors of the other ingredients.

Not many house salads are worth discussing, but Mighty Oak Barrel’s was truly exceptional. Toasted, slivered almonds delivered gentle crunch and earthy balance to dried cranberries and apricots — not too sweet, but just right — while tangy crumbled blue cheese added a pungent note to the tender mixed greens. Several dressings were available, but the champagne vinaigrette was the perfect complement, bright but not sour. 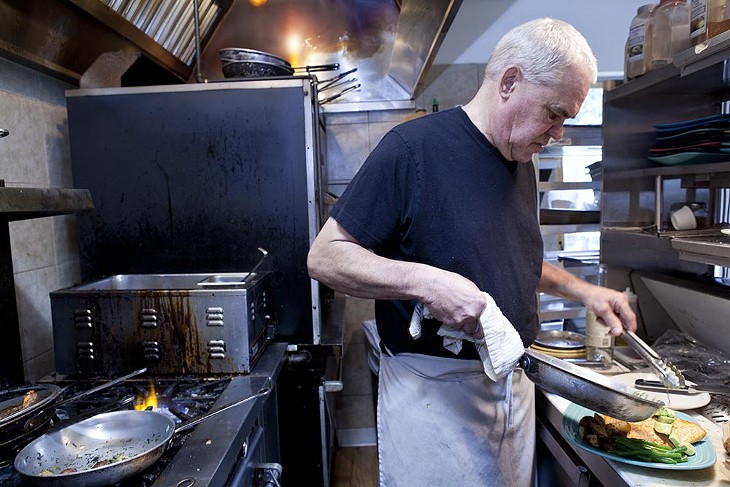 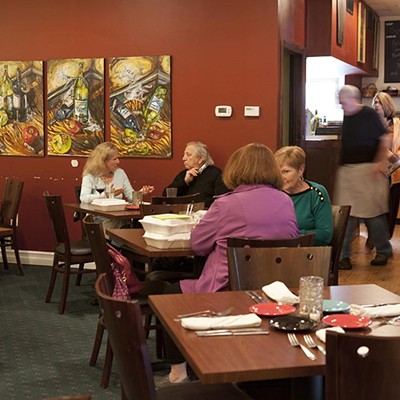 
Jason’s pork chop with mustard glaze and sour-cherry demi glace was thick and beautifully cooked, juicy and just rosy in the middle. The thick layer of whole-grain mustard balanced the sweetness of the demi and a generous topping of little, cooked cherries. Jason tends to be a purist about chops, but he had to admit that all of these flavors enhanced even this one, which would have been excellent on its own. A side of ratatouille, seasonal but an imperfect match for the autumnal feel of the chop, was quite good, cooked long enough to intensify the flavors without rendering the squash and eggplant mushy.

Lobster ravioli is a dish from the previous incarnation’s era, but the new one’s version is far from tired. Each ravioli was packed with briny, succulent shredded lobster meat for big seafood flavor, and the creamy tomato-vodka sauce had a more concentrated, astringent tomato flavor than the name usually implies.

With its comfortable, casual atmosphere and expertly prepared food, the new Mighty Oak Barrel is a worthy successor to the old.