Michael and Yelena Barnhouse run Lola Bistro on the North Side

The cozy restaurant turns out beautiful food, one step back from the limelight 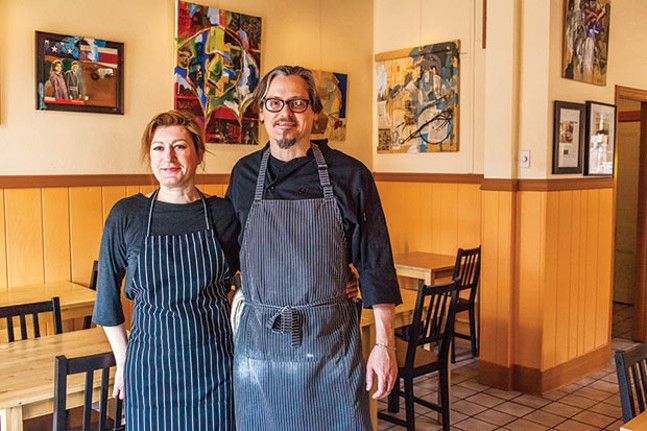 Lola Bistro is nestled among the beautiful 19th-century homes at the edge of the Mexican War Streets. It occupies the bottom floor of one such house, built in 1889, and at around 30 seats, makes for a very cozy space in which to dine. Since opening in 2012, Lola has been quietly turning out beautiful food, one step back from the limelight that the Pittsburgh restaurant scene has been enjoying. However, it has garnered a cult following, and those who go there return often.

Chef Michael Barnhouse and Yelena Barnhouse, partners in life and business, are the owners of Lola, and also its only employees. According to the Barnhouses, the space has hosted restaurants since 1936, and they still cook on the original stove. Often, the upstairs tenant will order food from the back door.

They made a decision not to advertise and let the business grow organically. “We don’t have a lot of time to mingle with other restaurant owners. I kind of came in through the back door in Pittsburgh,” says Michael. The pair moved here from Seattle in 2008, and decided to open a restaurant of their own. They built their menu around what they call “international comfort cuisine.” For this couple, international is certainly the key word.

Michael grew up relatively locally in St. Clairsville, Ohio. He has a bachelor’s of fine arts degree in painting (all the work hung in Lola is his). “Graduating with an art degree, I wasn’t really doing anything with that,” he says. “I felt some pressure to get something under my belt that would mean that I could get a job wherever I would go.” He developed an interest in cooking and holistic health, and eventually set off to New York City to attend the Natural Gourmet Institute. He worked lines, in catering and as a private chef throughout the 1990s in California and Seattle, even landing a gig with Wolfgang Puck. He traveled to Indonesia to study the food and culture. “Working in Seattle for as long as I did, about 15 years, my work is very Asian fusion-based,” says Michael. He also cites influences from chefs who cook Mediterranean fusion, as well as classic French technique.

Yelena is a Russian immigrant from southern Siberia, where she grew up on a small farm during the Soviet era. Her culinary training happened in the home kitchens of her mother and her grandmothers, and at the farmer’s market with her father. Her family taught her to forage for mushrooms, berries and herbs in the boreal forests of the Taiga and how to preserve foods for the long Siberian winters.

“My friends who grew up in the city, they had such bleak Soviet childhoods. They would spend a couple of hours a day standing in line for bread. For me, it was so adventurous living close to nature,” says Yelena. Living in a rural area, she learned these skills as a necessity.

“I’ve always cooked, but [in school] I actually studied world history,” she says. In fact, she did her master’s-degree work in it. When she met Barnhouse in Seattle, she was working in advertising for a newspaper. But as their relationship progressed, she started working in restaurants, mostly in the back of house. One night, she subbed in for one of Michael’s cooks who came to work drunk, and that is when the couple began working together.

During business hours, Yelena runs the front of the house. But her influence is also felt in the kitchen, where she prepares special dishes, like borscht, and helps with the heavy prep cooking, an essential part of running a two-person show. Occasionally, on extra busy nights, Michael will find himself making pasta to order, having run out of prepped dishes. But mostly, the couple credits prepping and planning for their success.

The two work in tandem on the menus. “It happens like magic,” says Yelena, of their process for menu development. Both have their own strengths from their unique backgrounds. For instance, Michael spent a year perfecting the noodle bowl on the menu, because his customers liked it so much. “My stuff, like the pelmeni [a Russian dumpling], that’s just traditional stuff,” says Yelena. “But you can’t find it [elsewhere in Pittsburgh].” They source their meats from Salem’s Market in the Strip District; some of the produce comes from their own garden, which they keep for the restaurant. Breads, pastas and charcuterie are made in house. The restaurant’s BYOB policy encourages people to come and stay awhile, and every table enjoys a two-hour reservation time. “We’re both stemming from old techniques. I’m not trying to reinvent the wheel,” says Michael.

A Pittsburgh hotel is hosting a gala with Islamophobic, pro-Trump speakers and some residents aren’t pleased