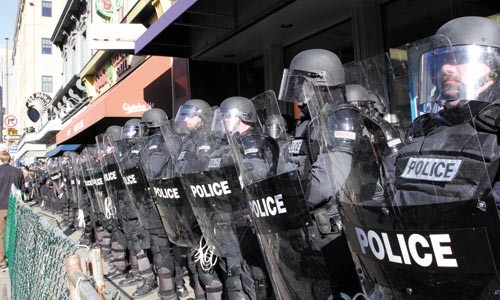 Renee Rosensteel
Police officers in riot gear met protesters at a 2006 anti-war march. More of the same is expected at September's G20 summit.

Want to know what Pittsburgh will be like during the G20 global economic summit this September? Ask Gan Golan.

Golan, an activist who has made a grad-school study of law-enforcement techniques, was in Miami in November 2003, protesting a summit intended to craft the Free Trade Area of the Americas economic pact.

"The city had been transformed into essentially a police state," Golan says from his home in Los Angeles. Forty law enforcement agencies, under Secret Service command, had armored vehicles on the streets and helicopters in the air. Lines of police in riot gear were firing such "less-lethal" weapons as Tasers, tear gas and rubber bullets at civilians.

Golan had traveled with a student group, joining thousands of protesters who felt the FTAA would institute policies that hurt workers and the environment. After 146 people were arrested on minor charges the first day, Golan joined about 100 protesters outside the jail. Police ordered them to disperse -- then blocked them as they tried to obey.

"Police grabbed me by the feet, dragged me down the street on my back," Golan says. "They then flipped me over, handcuffing my hands behind my back, pulled my head back and then sprayed me numerous times with pepper spray, point blank, in each eye. I was drenched in this chemical toxin and had cuts on my back.

Golan was later cleared of the charges, and was part of a successful class-action suit against authorities. And a 2004 report by the Miami-Dade County Internal Review Panel confirms the outline of Golan's account. While the report exonerated "the vast majority" of police from wrong-doing, it noted that protesters faced "an unprecedented police presence," and that persistent police and media warnings about "anarchists, anarchists, anarchists" coming from outside Miami had "contributed to a police mindset to err ... on the side of a dramatic show of force."

The question for Pittsburgh is: Could that happen here?

For law enforcement and activists across the country, the "Miami model" has become the norm for handling large demonstrations. That approach deploys what Golan calls "militarized tactics, weapons and training into local policing on a massive scale."

Pittsburgh activists hope things will be different when the world's top finance officials gather at the David L. Lawrence Convention Center on Sept. 24-25. But already it looks like city officials are taking a page from Miami's book.

On June 19, city officials announced plans to meet with police from London (site of the last G20, in April) and New York City (site of the last Republican National Convention, in August) to learn from their experience. Both used tactics that followed the "Miami model," and the Pittsburgh Post-Gazette reports the city is already planning to order "sizeable quantities of tear gas."

While the city's Public Safety Director Michael Huss did not comment by press time, city Emergency Management and Homeland Security Director Ray DeMichiei says local law enforcement "is looking at a wide range" of possible security purchases. The equipment will be bought with federal dollars that are directed to any federally designated National Special Security Event (NSSE), such as a G20 summit.

"I provided them with a list of cutting-edge stuff, up-and-coming stuff, less-than-lethal," he says. Department of Homeland Security grants won't fund munitions of any variety, he notes. But a sonic disruptor -- which uses painful sound waves to disperse crowds -- "is the kind of stuff we're looking at." Other money for new weaponry or other security devices may come from the Department of Justice, the state and elsewhere.

Activists are already bracing for confrontation. The National Lawyers Guild, which often sues cities that restrict protesters to free-speech zones and defends arrested activists, is planning to send a "cadre" of observers, says Executive Director Heidi Boghosian, and "definitely" expects Miami model tactics. But the seeds for trouble may be planted weeks before the summit even begins.

Golan, who has studied 14 major protests from 1999 to 2005, says that in the weeks ahead, Pittsburghers will soon hear wildly inflated estimates about the number of protesters expected. That, he says, will increase public perceptions of a threat. And, he predicts, so will efforts to demonize protesters by both the police and press.

That has already begun. Both local dailies have recently run columns characterizing protesters as worthless locals and dangerous outsiders. G20 will merely be a "grand excuse for a riot, a jackass-a-rama, a Woodstock of ratbags," the Post-Gazette's Reg Henry writes. "Among jackasses, the anarchists are the worst type," he concludes, labeling them poseurs.

"I don't think that helps add to a calm atmosphere ... or contributes to a healthy debate about the G20," says Pete Shell.

Shell, co-chair of the Thomas Merton Center's Anti-War Committee, laughs when asked about his expectations for G20 security. His group had already faced the Miami model in miniature, when more than 70 riot-ready police, carrying several types of less-lethal rifles, lined one block of Forbes Avenue during a 2006 antiwar march. They faced a large, peaceful crowd of several hundred, marching with a permit from the city. Shell calls that "a huge over-reaction."

For September, Shell says, "We're expecting quite a turnout. What we really hope is that the police don't contribute to tensions and fear or violence. We feel we have a right to march right up to the convention center in a peaceful protest, and I hope they respect that right."

Under the Miami model, getting within earshot of the G20 ministers isn't likely. "What's the premise for them wanting to keep us away?" Shell asks. "We've had these nonviolent protests in the past. Why should it be any different this time?"

Golan's study found that most protesters, even at these large events, are locals. But 82 percent of arrests by Miami police during the FTAA were out-of-towners, and every Pittsburgh activist group CP has contacted is talking to others across the nation intending to come.

Downtown lawyer Mike Healey, who has defended many local activists arrested after demonstrating in the city, says that he and other attorneys, including a state ACLU representative, have had preliminary discussions with the city about protester rights.

"We'll be in touch with them about First Amendment issues as they arise," Healey says.

That reassures Francine Porter, head of the local chapter of Code Pink, a women's peace group, who has already spoken to Healey herself about protest parameters. Code Pink is in the preliminary stages of planning its own G20 protest events.

"I do think security is going to be tight," Porter says, "but we still have a right to organize around this." Unsure whether her group will be granted a permit for its event, she is already contemplating having to sue for one.

"There will be negotiations with the city and police department on when and where [events can be held], and getting the permits," says Paul Le Blanc. Le Blanc is a La Roche College history professor working with other groups at colleges and universities to organize "A People's Summit" gathering for speeches, panels and workshops Sept. 21-22, as well as a march to the G20 site. "For the most part, there isn't violence unless there is a lack of permits," he believes. "If there's civil disobedience, and I think nonviolent civil disobedience is a great American tradition dating to before Martin Luther King, there could be arrests, which is the norm -- that's part of the set-up with civil disobedience."

As longtime national organizer David Meieran of Squirrel Hill put it: "The city's use of Miami model-style tactics in the past ... has not intimidated protesters or stymied the efforts of activists across the organizing sectors that we will see working on the G20."

What happens during the G20 summit itself is only part of what activists worry about. While the finance ministers will leave town after a couple of days, the new police tactics are likely here to stay. Once new equipment is bought and new approaches instituted, says Golan, they "remain part of police procedures every day. They get used on civilian populations."

Indeed, says the city's DeMichiei, equipment purchased for the 2006 MLB All-Star game has remained in use on city streets. An armored vehicle, called "The Bear" and purchased for All-Star security, "is used virtually weekly," DeMichiei says. In April, the vehicle drew headlines for being used in the attempted rescue of three downed city police officers during the Stanton Heights shooting. At other times, though, it has drawn complaints from residents: In 2007, neighborhood representatives complained to City Paper that the vehicle's frequent use makes their communities feel like "downtown Beirut."

"It has a day-to-day capability that just doesn't go away after the All-Star Game," DeMichiei concludes. "It's just a good way to use federal dollars."

Similarly, communication equipment installed for the event is still monitoring both All-Star venues: PNC Park and the convention center. The city plans to extend that network with new capabilities for the upcoming summit. "There's a chance they'll remain in place after G20 for our normal emergencies, for lack of a better term."

And even "less-lethal" technology can have dangerous consequences. Golan cites the death of Victoria Snelgrove, who was celebrating a Red Sox league championship in 2004 when she was shot in the eye by Boston police using a less-lethal projectile. The weapon had been purchased for crowd control at the Democratic National Convention held in Boston earlier that year.

Golan says Pittsburgh will be an early test of whether "Miami-model policies are going to continue under an Obama administration," as they did under George W. Bush. In any case, he says, hosting the G20 Summit may change Pittsburgh in lasting ways. More surveillance and firepower on the streets, he says, "end up transforming the city long term in ways people need to think about."