Mexico Lindo returns with its popular Day of the Dead celebration.

Like Cinco de Mayo, The Day of the Dead is almost completely misunderstood in the U.S. 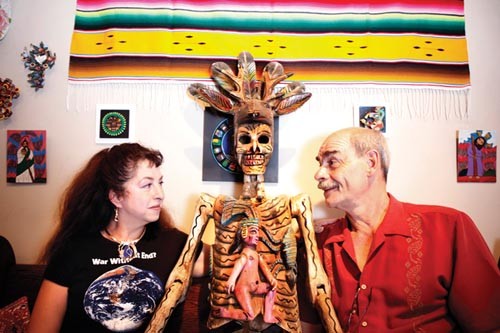 Elizabeth Taylor died this year, and so did Peter Falk. Amy Winehouse seemed doomed, but not quite so soon. After assisting hundreds of suicides, Jack Kevorkian expired of natural causes. And then there are less famous deaths, like the casualties of Iraq and Afghanistan, and the victims of Mexico's "war on drugs."

"I have an ongoing list of people who have died," says Lisa DiGioia-Nutini, co-owner of Mexico Lindo, a folk-art store in Squirrel Hill. "At the Day of the Dead, we feel as though they are here with us."

That's the idea behind Día de los Muertos, the world-famous Mexican holiday that celebrates people who have passed. A mix of pre-Columbian rites and Catholic liturgy, The Day of the Dead is one of Mexico's most beloved festivals. Celebrants light candles, decorate graves, wear skeleton costumes and create ofrendas, or "offerings."

Ofrendas are collections of candles, photos, pictures, linens, crucifixes and candy skulls -- anything that reminds the living of their lost loved ones -- arranged into dioramas and sculptures. Each ofrenda is like a cross between a tiny temple and miniature museum, laid out for all to see. Often they are garnished with marigolds, a memorial flower.

Like Cinco de Mayo, The Day of the Dead is almost completely misunderstood in the U.S. At best, Americans tend to know it as the "Mexican Halloween." At worst, Americans are put off by the macabre skeleton motifs.

But DiGioia-Nutini and her husband, Jean-Pierre, may be the most avid observers in Pittsburgh, and they decorate their store with elaborate ofrendas. They honor friends, celebrities, soldiers, murder victims and anyone else they can think of. They arrange skeleton mannequins and play traditional Mexican music. Anyone who steps through the door is welcome to cookies, tea and coffee. Sometimes they'll bake pan de muerto, or "bread of the dead." As in Mexico, their Day of the Dead commemoration starts somber and contemplative, but evolves throughout the night. "Then it becomes a big party," says DiGioia-Nutini.

The store's celebration commemorates a lot of touchy subjects, such as military casualties, Mexico's anarchic drug war and even monarch butterflies, which are revered in Mexico as reincarnated human souls and may soon be endangered. If their ofrendas have a certain political edge, the Nutinis are only continuing a tradition: Skeletons became the trademark image of José Guadalupe Posada, a 19th-century illustrator who used barebones caricatures to safely satirize public figures. His cartoons have inspired artists, activists and even the Grateful Dead.

The Nutinis have operated Mexico Lindo since 2004, along with an online store since 2000. The two-room shop, located on Murray Avenue, is right at home in Squirrel Hill; its neighbors include dozens of ethnic and specialty shops, from Peruvian outfitters to a Judaica outlet. The couple has a strong connection to Mexico, due in part to a branch of Jean-Pierre's family that originated in Mexico City.

But the store's Day of the Dead celebration is a category all its own. "I know a host of people who look forward to this all year long," says DiGioia-Nutini. "They say, ‘Are you doing it again this year?' They come from Ohio, West Virginia, Boston, Florida. They'll be passing through, visiting family, and they make a stop here."

While the Day of the Dead is considered a religious holiday, DiGioia-Nutini invites visitors from any cultural or religious background to attend their open house. "It's not just for the Latino community," she says. "It's obviously for everyone."

What's more, DiGioia-Nutini feels a serious bond with the holiday, not just as a meaningful milestone, but as an actual chance to converse with the dead. "I believe that communication happens all the time," DiGioia-Nutini asserts. "I've had some very powerful experiences. I believe that life goes on in other ways, in ways and in realms that we can't even imagine."

This belief is important to her: Both her parents are deceased, and more friends and family seem to pass away every year. For DiGioia-Nutini, The Day of the Dead is an occasion to honor them, and even feel their presence.

Traditionally, the holiday itself takes place on Nov. 1 and 2. But historians believe that the Aztec festival lasted an entire month, feting not only death but the autumnal harvest too. Following suit, Mexico Lindo exhibits its ofrendas from Oct. 28 to Nov. 19. Even if visitors can't make the official open house, they can still see the decorations for weeks afterward.

"It's about educating people as much as you can," says DiGioia-Nutini. "It's not that difficult to understand."