The crusts at Doughboy's Pizza are colossal. Maybe it's obvious from the name, but the McKees Rocks pizzeria sets itself apart with a unique dough and a meticulous, semi-secret process of preparation. The result? Pizzas with eye-popping, formidable crusts that resemble few other pies in the city.

“The dough recipe is pretty simple," says Ryan Neal, who co-owns Doughboy's with Chuck Landa. "But it’s the caretaking and the knowledge that you have to have to be able to select when it’s ready to be used and what temperature to get the end result you’re looking for."

The dough is made daily in-house, though Neal refuses to divulge anything else about the recipe. He does, however, allude to the process. It’s similar to that of a distiller: batches made daily aren’t necessarily used that day. They’re left to ferment and Neal chooses dough for use based on age, temperature, and time. Neal and Landa use the same dough recipe for their two styles of pizza, Sicilian and traditional, though the end results are vastly different. Sicilian pies have the rise of a thick focaccia, while the traditional crusts blossom so wide that they collapse in on themselves.

I tried a slice of both styles, a traditional topped with pepperoni and mushroom, and a cheese Sicilian. The traditional pie was a little dull in comparison to the Sicilian, though the crust still surpassed that of an average slice. The light, sweet sauce didn’t have as much room to shine when weighed down with toppings. 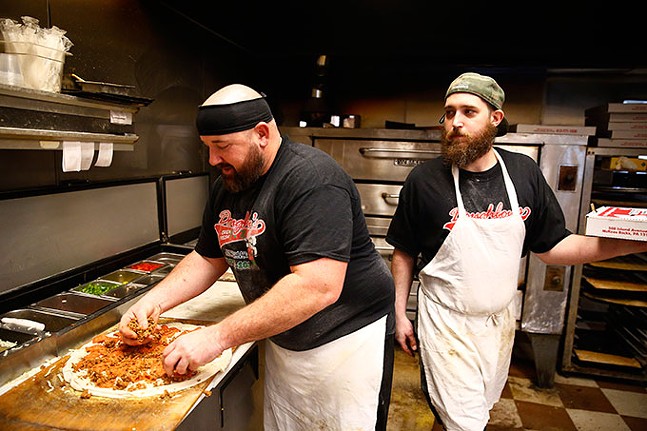 The Sicilian, on the other hand, was straight up blissful. It was doused in butter with a crust so thick most of the sauce was absorbed, yet the edges remained crunchy. The pie rose in a way similar to a pan of brownies, giving the crust a fluffy, pillowy texture in the center. The cheese was a standard blend of mozzarella and provolone, but fooled me into thinking it was Swiss. This "unique" characteristic was the result of another secret process, says Neal.

(It is worth noting that if you're like me and enjoy pizza leftovers cold and straight from the fridge, stick to a traditional pie. When eaten cold, the butter-soaked Sicilian pie is too greasy. A slice of the traditional is perfect for a breakfast on-the-go or late-night snack.)

While the dough is an undeniable standout, Doughboy's also has a pretty substantial menu beyond slices and pies, including burgers, sandwiches, sides, gyros, and for dessert, cheesecake.

I went with a supersized sandwich named the Juggernaut and it was true to its name. It seemed to weigh five pounds, loaded with ham, turkey, bacon, fries, American cheese, Swiss cheese, lettuce, tomato, and the restaurant’s Shantz sauce. There was a little too much going on for my taste (I couldn’t even fit half of the sandwich in my mouth), but flavor-wise, it worked.

There’s no shortage of neighborhood pizza joints in Pittsburgh, and from the outside, Doughboy’s Pizza looks like any other: small, takeout-only, and busy with delivery drivers and flour-covered chefs trying to keep afloat amid a constant flow of orders. But for the past 15 years, Neal and Landa have run Doughboy’s with one, unique goal in mind: “to give locals a more-than-average pizza restaurant that dishes out enormous flavors.” And it’s these flavors, or as Neal says, “a lot of love,” that will keep Pittsburghers coming back for 15 more.

1. Doughboy’s Drivers
Yes, they do Postmates, but Doughboy’s still keeps things old -school with a fleet of its own drivers.

2. Toppings
Doughboy’s doesn’t take the concept of toppings lightly, so be prepared when placing your order.