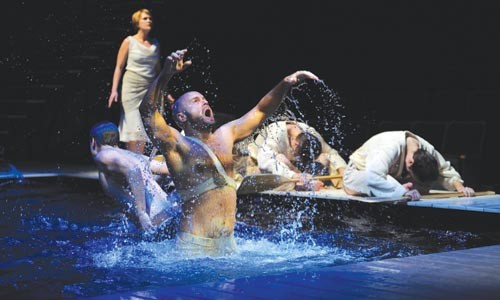 By now, friends of the Public Theater have come to know Metamorphoses, adapted by Mary Zimmerman, as "that play with the swimming pool in it." And yes, there is a swimming pool, which takes up most of the stage, and director Ted Pappas puts it to great use. But first, what is Metamorphoses?

Mary Zimmerman is a decorated, successful Chicago-based playwright who decided to adapt Metamorphoses to the contemporary stage. Like a modern-day Midas, everything Zimmerman touches seems to turn into thespian gold, and Metamorphoses won huge accolades in New York.

But the centerpiece -- a functional swimming-pool that takes up most of center-stage -- is more than a gimmicky special effect. It also plays to Ovid's watery themes, his rippling dreamscape of self-disguising deities and tormented mortals. In Ovid's world, the Underworld is a revolving door of the dying and reborn; souls are damned and rewarded on an omnipotent whim; every wish is granted for an arbitrary price. One moment a hero is riding a wave; the next, he's drowning. Or turning into a bird. Or screwing his own daughter. Life is as ever-changing as the tides.

Pappas uses the pool well, his actors are spry and graceful, and after awhile, the water becomes just a shimmery prop. This production really thrives on its blend of transcendent poetry and silly good humor. Pappas has also conscripted an ethnically diverse cast, as if to show how universal such folk tales -- and such folk tellers -- can be. These 10 stars propel the fantasia with perfect wit and timing, sprinting from shipwreck to villa to Ethiopian desert in the course of 70 intermissionless minutes. Hopefully Zimmerman is as satisfied with the Public's rendition as with the play's New York debut. And as Ovid himself might have put it: Hunc effectum optimum esse scio.