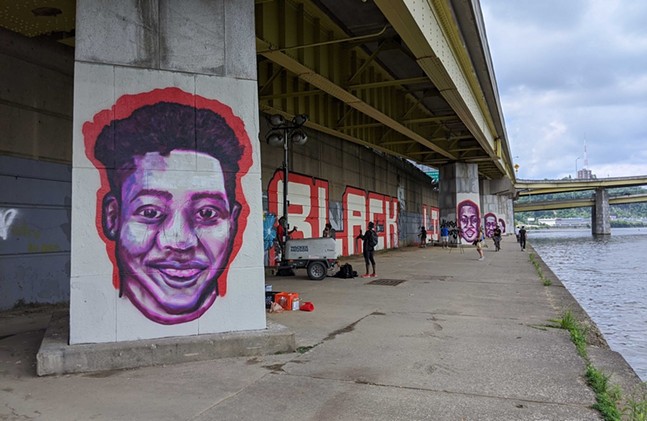 CP photo: Amanda Waltz
Black Lives Matter community mural in Downtown Pittsburgh, June 10, 2020
According to a video posted to social media on Sat., Sept. 19, two men were seen apparently shooting paintballs at a large Black Lives Matter mural in Downtown Pittsburgh. The mural adorns the wall that runs along a riverfront trail on the Allegheny River and connects to Point State Park.

Video shows the two men, one wearing a sweatshirt emulating the Confederate Battle Flag, apparently firing at the mural in the late evening. Photos of the two men are being shared on Twitter as well, from when they were walking along the North Shore apparently earlier in the day.

The Black Lives Matter mural was originally a graffiti art project, but eventually became a community effort that involved many artists from Pittsburgh. Despite being an unsanctioned work, Pittsburgh officials, including Mayor Bill Peduto, approved of the mural and instructed the public works project to not remove it.