A formulaic but feel-good real-life tale of two Marines, one human and one canine 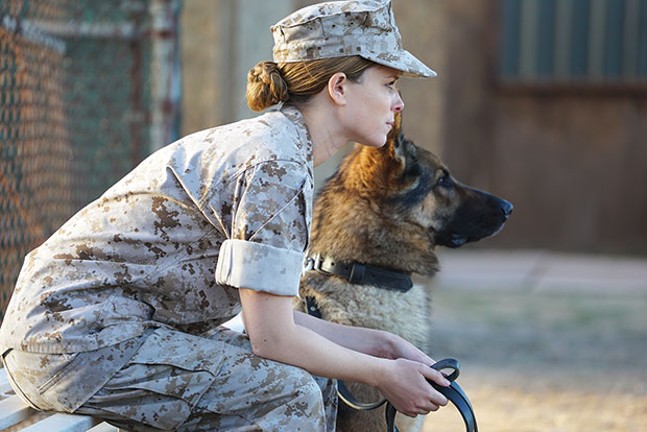 Megan (Kate Mara) introduces herself during the opening scene of Megan Leavey as a directionless young woman from a dead-end town. So, following Sept. 11, she joins the Marines and discovers her calling: working with an explosives-detecting German shepherd named Rex, a fellow “Marine” who has some anger issues. But the two work well together, and Gabriela Cowperthwaite’s mostly feel-good, real-life drama follows them to Iraq, where everything is potentially deadly. The tour in Iraq results in traumatic experiences for Megan and Rex, and the film shifts to those repercussions. Megan doesn’t have much support for her PTSD; her strongest emotional bond has been with Rex, who is trapped in various bureaucracies of the military. (Rex is Marine property, not a pet.) But Megan, and by extension, this film fights back, advocating that Rex deserves the more humane treatment offered to two-legged vets. It’s a formulaic tale, but one for the shelf of contemporary films that are tracking our changing relationship to combat veterans, both human and canine. Starts Fri., June 9

Hop Along reaches new heights on its latest, Bark Your Head Off, Dog