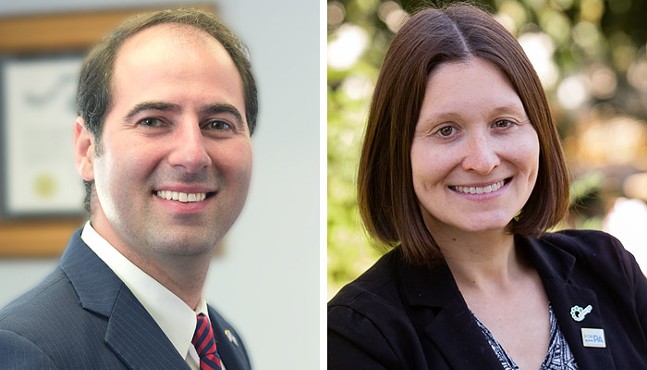 Photos courtesy of campaigns
Marco Attisano (left) and Lissa Shulman (right)
The 2018 midterm elections saw a number of victories for Democrats across the country and here in Allegheny County. U.S. Rep. Conor Lamb (D-Mount Lebanon) flipped a district from red to blue, as did state Sen. Lindsey Williams (D-West View).

But there were still some seats that Republicans held onto in the blue wave, including all the competitive state House seats in Allegheny County.

And in this cycle, the most competitive and flippable of those seats, state House District 30, has already drawn two challengers.

Ben Forstate, a local election analyst, tweeted in June about the district's potential to flip from red to blue. Mizgorski won the seat in 2018 against Democrat Betsy Monroe by fewer than five points, and many parts of the district are starting to shift to favor Democrats. Democratic Gov. Tom Wolf, U.S. Sen. Bob Casey, and Lamb all outperformed Republicans in District 30 in 2018.


Attisano says he has about 15 years of public-service experience under his belt. He served in the U.S. Navy right out of high school, then volunteered for AmeriCorps after graduating from Allegheny College. He then attended the University of Pittsburgh Law school and become an Assistant District Attorney in Allegheny County. Now he runs his own law firm and lives in O’Hara with his wife and young son.

He says he is looking forward to touring the district to learn about what constituents want out of a representative, but so far he's heard the most pressing issue is infrastructure.

“We have been hit really hard with a lot of storms,” says Attisano. “The stormwater management problems have to be addressed at the state level. We have to show how the government can improve your quality of life.”

Attisano, who also worked as the treasurer for Conor Lamb’s campaign, says that public schools in District 30 are very strong, but wants to put more focus on the state’s role in combating high cost for universities and childcare.

“Look at the rise in tuition. It is outpacing inflation and wages,” says Attisano. “Everyone agrees it is a problem.”

Attisano hints at supporting increases in state spending to tackle some of these issues but didn’t specify exactly which methods would accomplish that. He says he wants to spend more time with constituents and get a better sense of how they want to approach these issues.

“I am really looking forward to talking to more people in the district,” says Attisano. “I am excited about expanding that conversation and raising the level of civic discourse and inspire some civic engagement.”

Shulman also wants to bring more light to issues she feels are not getting enough attention at the state capital. She says state government needs to get more serious about how to tackle issues like paid family leave and equal pay.

“I know how to deliver results,” says Shulman. “I am a working mother of young kids, that is an experience that not many have in Harrisburg.”

Shulman worked previously as chief of staff for state Rep. Dan Miller and before that, she worked in a teaching leadership program that places individuals in low-income schools. Shulman attended the University of Pittsburgh and has experience working at a nonprofit advocacy group that pushes for early childhood education. She has been garnered support from state Sen. Lindsey Williams and state Rep. Sara Innamorato (D-Lawrenceville).

District 30 is one of the more popular districts for new arrivals to the Pittsburgh area with its quality public schools and suburban communities, and Shulman, who lives in Hampton, says the residents of the district have been a big reason she has chosen to call it home.

“When I came here from Pitt, I was looking for communities where I wanted to raise my family, and Hampton township was it.”

She understands the appeal of District 30 and says that is why she wants to focus her campaign on “making sure the economy is working for everyone.”

Shulman says her extensive state government experience will help her pass bipartisan legislation on things like giving more opportunities for Pennsylvanian children to attend preschool. She supports increasing state funds and “other creative funds to make sure that we are investing in that critical period” in education.

She also wants to increase access to healthcare, especially prenatal care. “I know the system we have is broken and there is a lot of problems with access, even for folks with insurance."

She, like Attisano, says she is excited to get to know her district more and the campaign unfolds.

“I am really excited to announce, and to meet with more folks and to talk about what I can bring to the district,” says Shulman.