Leandra Mira is a little worried the people who pass her think she’s a doomsday prophet.

It’s the “11 YEARS” poster that might cause confusion, propped up next to Mira’s regular perch in Downtown Pittsburgh, right on the City-County Building steps. Those 11 years, some climate researchers say, are all that’s left to prevent irreversible damage from climate change.

But 17-year-old Mira, who has sat by herself on the steps every Friday from 12-4 p.m. for the past month, doesn’t want to tell you about the end of the world. Like many of the young activists who have started striking for action on climate change, Mira just wants us to do something.

Mira’s goals are part global, part local. As an Upper St. Clair native, Mira isn’t technically a Pittsburgher, and the city officials working behind her in the City-County Building weren’t elected or appointed to serve her. (Contrary to the building’s name, most Allegheny County officials work in other buildings nearby.) But reading about Pittsburgh’s poor air, and the ethane cracker plant Shell is constructing in Beaver County, made her feel like she needed to do something.

She doesn’t have a written list of demands, at least not yet. She doesn’t trust herself with that, she says — her protest is all about finding other people who can help her make the changes she wants to make. Her hope is that it all leads up to a large demonstration near this spot on Sept. 20, the planned date of a massive global climate strike.

Mira’s inspiration, 16-year-old Greta Thunberg, started striking outside the Swedish Parliament in Stockholm less than a year ago. Eventually, others joined her. Now, more than a million people across the world have participated in Thunberg’s School Strike for Climate Change. She’s addressed the U.N. Climate Change Conference in Poland and was featured on the cover of Time magazine, and her movement is still growing.

First, though, Friday after Friday, just like Mira, she sat alone.

When Mira decided she wanted to start a #FridaysForFuture movement in Pittsburgh, she took to social media, advertising the plan on Instagram — she figured that was a good place to recruit like-minded teens. No one showed up the first week. Or the second. 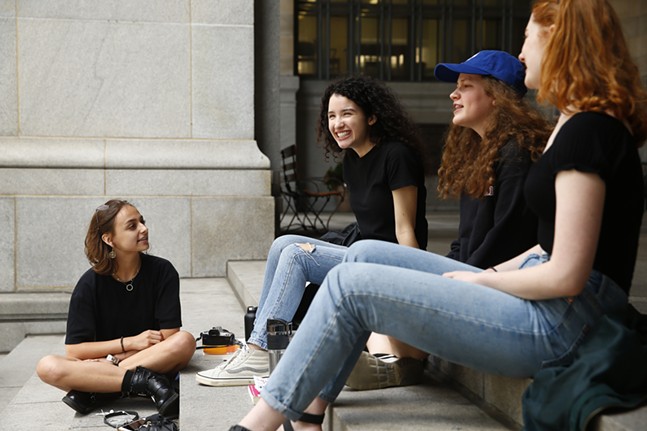 As she prepared for her third Friday on the City-County Building steps, Mira said that although “it does feel lonely sometimes,” she doesn’t blame kids her age who message her with excuses for why they’re not joining her or — even worse — say they’re coming and then don’t show.

“I’ve been out here for two weeks alone,” she said. “I’ll be out here for more and more weeks alone if I have to, but you don’t have to make an excuse. It’s not like a birthday party. If you want to come, then come. I’m choosing to do this, but not everyone wants to spend a couple hours on Friday doing this.”

The third Friday was different, though. Paul Kim, the head organizer of the Pittsburgh chapter of this spring’s Youth Climate Strike, left summer camp to join Mira for the last hour of her protest. Kim, also 17, arrived in a Bernie Sanders T-shirt and greeted Mira with a hug, pulling out a “Green New Deal Now” sign. They’d never met in person before.

“Thank you so much for what you’re doing,” Kim said. “We need to amplify this movement, and we need to bring more people out.”

Immediately, the two started talking about plans for the future. The next Youth Climate Strike is Sept. 20, a date Mira knew from the start would be the next big step in her plan. Hopefully, Mira said, if she continues her protest every Friday until September, they’ll be able to harness the energy for the September strike and beyond.

“In a year, if we keep doing this every Friday, we’ll get to a place where there’s hundreds of kids or thousands of kids,” Mira said.

Kim wasn’t Mira’s only companion that day, either. Two activists from the Clean Air Council saw a tweet about Mira’s protest and stopped by to give encouragement and take a selfie. (“I finally have friends!” Mira joked as they took the picture together.) Allegheny County Councilor Anita Prizio (D-O’Hara), an environmental advocate who has proposed a natural-gas drilling registry for Allegheny County, came by too. She gave Mira a few names, local activists to reach out to for help.

“This is your future,” Prizio told Mira. “I’ll be gone at that time, but it’s so important that we leave something for future generations, for my children and grandchildren. We need to think big.” She points to climate advocate and U.S. Rep. Alexandria Ocasio-Cortez (D-New York) as an example. “She’s thinking big.”

“I love her,” Mira said about Ocasio-Cortez. “I’m going to be her vice president.”

“You have my vote,” said Prizio.

Actually, Mira wants to be a marine biologist. She’ll graduate from online school later this summer and then spend a gap year living in Pittsburgh, volunteering around the city — and sitting on the City-County Building steps every Friday. Eventually, she wants to travel the world, she says, and create documentaries about the environment. After all, Mira was sitting at home, watching documentaries and reading articles, when she decided she wanted to take action.

“I’ve been thinking,‘How do I take the next steps to achieve this?’ and it always involves other people,” Mira said. “[But] there has to be someone who just starts.”


One week later, Mira was back in front of the City-County Building. And it appears her momentum is growing, slowly.

Two former classmates from Upper St. Clair High School — and members of the school’s environmental club — were with her this time. Both said they plan to come back as often as they can this summer. Prizio visited again too, and Pittsburgh City Councilor Erika Strassburger (D-Shadyside), came by with her baby. Strassburger spoke with Mira about messaging climate policy for the general public and how to keep people continuously involved in a movement that will likely take years to enact bold changes. The councilor even invited Mira to speak at an air quality listening session she’s hosting at Repair the World Pittsburgh next week.

“Climate change affects all of us, and the future of Pittsburgh and our world depend on persistent, committed young leaders like Leandra to advocate for change at all levels of government,” said Strassburger in a statement sent to City Paper. “I look forward to working with these young advocates to make real change into the future.”

And some people who stopped were just curious passersby. The knot of people attracted friendlier looks than Mira did alone. One man approached, introduced himself, and asked about the “Climate Action Now” sign next to Mira. Mira’s classmates looked at her, and then Mira sat up straight.

“We’re sitting out here today because there’s a global movement called Fridays for Future,” she began.