Pennsylvania’s Commonwealth Court has been a big player in the ongoing attempts by the Trump campaign and other Republicans to overturn the state’s election results or invalidate ballots. But thus far, the Republican-dominated court has had all of its 2020 election-related decisions overturned or vacated by the Pennsylvania Supreme Court, despite conservatives like congressional candidate Sean Parnell (R-Ohio Township) portraying the court decisions as victories.

Wolf and Secretary of the Commonwealth Kathy Boockvar appealed McCullough’s ruling to the state Supreme Court, which dismissed the case with prejudice. The court said the petitioners, who include Kelly and Parnell, who lost this year to U.S. Rep. Conor Lamb (D-Mt. Lebanon), didn’t bring their case in a timely manner and failing to certify the results would result in the disenfranchisement of millions of Pennsylvania voters.

“The want of due diligence demonstrated in this matter is unmistakable,” the court wrote in its majority opinion.

That’s a fairly stern ruling from the state’s high court. In addition to McCullough, another Commonwealth Court judge, Kevin Brobson, recently ruled in favor of a Republican state Senate candidate, who was seeking that disputed mail-in ballots not be counted. That ruling, like McCollugh’s, was also overturned by the state Supreme Court. The state’s highest court currently has five justices elected as Democrats and two justices elected as Republicans. 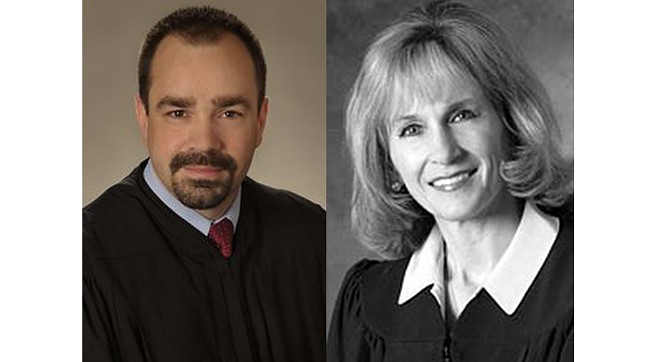 In October, the Trump campaign argued that poll watchers in Philadelphia should be allowed to observe at satellite locations.

Judge Gary Glazer of the Philadelphia County Court of Common Pleas ruled that the satellite offices didn’t qualify as polling places and that the state Election Code “contains no provision that expressly grants the Campaign and its representatives a right to serve as watchers at satellite offices of the Board of Elections.” Satellite election offices were established in Philadelphia and other Pennsylvania counties prior to Election Day to allow people alternative locations to register to vote and apply for and return mail-in ballots.

Commonwealth Court judges Ellen Ceisler (a Democrat) and Leadbetter affirmed Glazer’s ruling in the court’s October 23rd decision. But McCullough wrote that she “emphatically” dissented with the majority opinion.

McCullough wrote in her dissent that Glazer and the Commonwealth Court judges “effectively deprive both presidential candidates, and by extension, every party and candidate, of their statutory right to have poll watchers present at places where electors cast and submit votes in person and in numbers unparalleled in our times.”

Philadelphia election commissioners argued that the Trump campaign was trying to intimidate the city’s overwhelmingly Democratic voters. In the end, Philadelphia ended up increasing its margin of Trump votes compared to 2016, even though the poll watchers weren’t allowed at satellite voting locations.

But McCullough isn’t the only Commonwealth Court Judge providing favorable rulings to Republicans, just to have them overturned shortly thereafter.

Judge Brobson also has been in the spotlight with the Trump campaign election challenges. Before serving as a judge, Brobson worked for 27 years as a state trooper, as well as a Harrisburg-based attorney. While campaigning in 2009 in Stroudsburg, he boasted about only representing private entities as an attorney, and said “the government has plenty of counsel.”

Brobson wrote the majority opinion in the court’s Nov. 18 ruling that some 2,300 mail-in-ballots in the 45th Senatorial District should not be counted because they lacked handwritten dates.

The letter of the law, Brobson wrote, required the votes to be thrown out, and by not doing so it would be “absolving [voters] of their responsibility to execute their ballots in accordance with law,” even as he acknowledged “we realize that our decision in this case means that some votes will not be counted.”

But once again, the Pennsylvania Supreme Court overturned the Commonwealth Court decision. Justice Christine Donohue wrote in the majority opinion that “failures to include a handwritten name, address, or date in the voter declaration on the back of the outer envelope, while constituting technical violations of the Election Code, do not warrant the wholesale disenfranchisement of thousands of Pennsylvania voters.”

Even federal Judge J. Nicholas Ranjan, a Trump-appointee, rejected Republican candidate Nicole Ziccarelli’s request for a restraining order, saying it would disenfranchise potentially thousands of voters, and that the ballots had arrived on time and were otherwise without errors.

Brobson’s ruling gathered less attention from national outlets since it only pertained to a state Senate race, but if his decision were not overruled and the mail-in ballots were not counted, Ziccarelli would almost certainly be in the lead. Instead with the votes counted, state Sen. Jim Brewster (D-McKeesport) holds a narrow lead.

Prior to that ruling, Brobson was best known for his 2017 ruling on Pennsylvania’s heavily gerrymandered Congressional district maps. He ruled that while those districts favored Republicans, the Democrats who sued had not demonstrated a legal standard for creating nonpartisan maps. A few weeks later, his decision was struck down by the state Supreme Court, who found that the Congressional map represented an illegal partisan gerrymandering that favored Republicans.

In 2019, some of Brobson’s campaign top donors included then state Senate President Pro Tempore Joe Scarnati (R-Warren) and Build PA PAC, who each gave $2,500 directly to his campaign, according to watchdog group TransparencyUSA. This cycle, Build PA PAC spent $125,000 on Ziccarelli’s campaign, as well as hundreds of thousands of dollars on other Republican state senate candidates in Pennsylvania, and $425,000 to the Senate Republican Campaign Committee.