“I took off my carpenter apron and put on a kitchen apron and I’ve had one on ever since.” 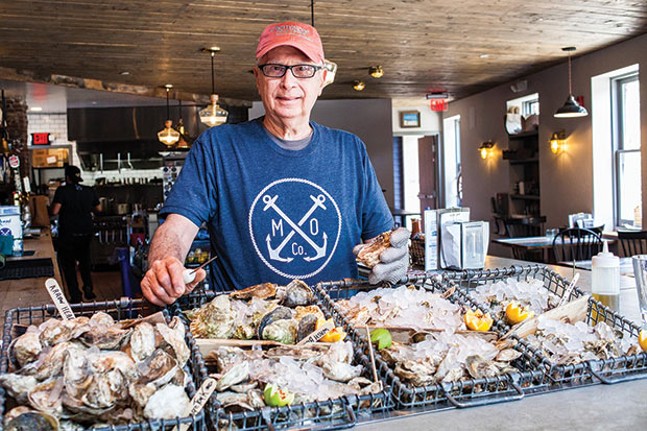 In his 45-year career, Angelo Galioto estimates he’s shucked about a million oysters. From his time in Florida as a vegetarian restaurant owner, to his current position as a friendly oyster aficionado at Merchant Oyster Co. in Lawrenceville, Galioto has learned a lot about life, friendship and food. City Paper spent a cozy afternoon with Galioto earlier this winter, figuring out what a lifetime of work and adventure means to him.

I hear you’re the man with the oyster stories.

Yes. [Laughs] Which one would you like me to start with? I’ve been doing it for about 45 years, from Florida, a little in Cape Cod and a lot in Pittsburgh, mainly with my family. Every time there’s a tailgate party, [my family says] “Uncle Ang, you’re invited ... and can you bring some oysters?” So that means about 100 at a time with my family.

How did you get into the restaurant industry?

The reason I got into the restaurant business was a friend of mine said “Let’s open a restaurant.” At that time, I was a journeyman carpenter. This is 1974-ish. It was a hot summer in Florida ... sweating. I took off my carpenter apron and put on a kitchen apron and I’ve had one on ever since. I worked for Alive and Well [Galioto’s vegetarian restaurant] for 10 years. I opened a bar in South Miami and another little bar in West Palm Beach. And then I went and worked for a seafood purveyor and during that time, I learned all about how to cut fish. I mean, I’m Italian and I didn’t know how to filet a tuna or a snapper or shuck oysters very well. We would do 500 [oysters] at a time for … country clubs. 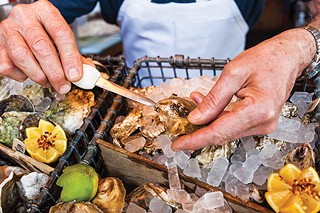 How do you manage that kind of work?

I’m 71 years old and I have really strong hands. My hands are in great shape. No cuts because I’m really careful. I have my stainless-steel mesh glove which makes me confident I’m not going to hurt myself. Once I was in a cocktail bar — a jazz bar at 2 a.m. — and there was a beautiful blonde sitting in the bar and we were the only two. I was dressed really well. I think I had just taken my daughter home from the opera in Palm Beach. She came over to me and said, “Sir, I see you’re immaculate.” My hands were just perfect, and I was dressed nice. She said “I noticed your hands. Are you a doctor?” And I hit her with the line, “no but I’m good with a knife.” She got up and walked away. She didn’t give me a chance to say, “I’d love to make you breakfast or dinner.” Smart woman. I said [to myself], “not the line to use.” I learned a lesson. [Laughs]

From your many decades working with oysters, can you give any pointers about selecting them or working with them?

It’s almost like wine. There are so many different notes and tastes. I taste them all the time because even the time of year that you’re tasting the same oysters, [the flavor] can change depending on the algae, the seaweed, the salinity of the water in the current that’s coming near the oyster beds. It changes. Some of the tastes are [from] the amount of salt. Boutique oysters that come from the west coast are a little creamier, a little buttery and exotic. Boutique oysters are smaller and not as well known as a standard oyster like a Delaware oyster. Some of them are delicate and aren’t around all year. They’re mostly petite. All oysters are a little different. You have to know how to handle them. You have to keep them on ice or refrigerated at all times because they’re alive. You don’t want to eat a dead oyster unless you’re opening and shucking them right there. It’s a delicate product.

Can you give me a shucking lesson?

You’ll have to wear my glove. It’s a like a Michael Jackson glove because there’s only one [Laughs] ... You want to pop the hinge [of the oyster] like a bottle cap [with the tip of the knife]. You wipe your knife off and you want to get abductor muscle off from the top of the shell so you scrap the top of the oyster and the bottom and it comes loose. Then you eat them with lemon juice and olive oil. That’s how I grew up eating them. My dad and my mum were from Sicily. Since they grew olives and lemons, that was the choice for condiments.

Editor’s Note: This interview has been edited for length and clarity. To hear an extended audio version of this interview, check out our Sound Bite episode featuring Galioto.