Photo: Adam Milliron
Spork Pittsburgh
“At Spork, we pride ourselves on crafting an experience that is both modern and down-to-earth," Chef Frangiadis said in an Instagram post after the announcement. "I’m humbled to be recognized by such a prestigious foundation.”

Spork's menu ranges from charcuterie and small plates for sharing to larger splurges like a Bavette & Lobster Corn Dog. Chef Frangiadis also offers a seven-course tasting menu for $65 per person, but those on a tighter budget who want to experience the cuisine are in luck: The chef is also offering a $30 three-course menu in March for only $30, plus tax and gratuity, for Pittsburgh City Paper's Taste30, an event featuring "30 days of delicious dining" at eight different restaurants in the city.

Chef Frangiadis' first course for his Taste30 menu will be a mixed green salad, with espresso vinaigrette, chevre, cherries, and spiced pecans; the second course, a choice of Bolognese Lasagna, Forest Mushroom & Spinach Lasagna, or Three Cheese Lasagna; and the third, Affagato for dessert, with vanilla ice cream, espresso, and honeycomb toffee. 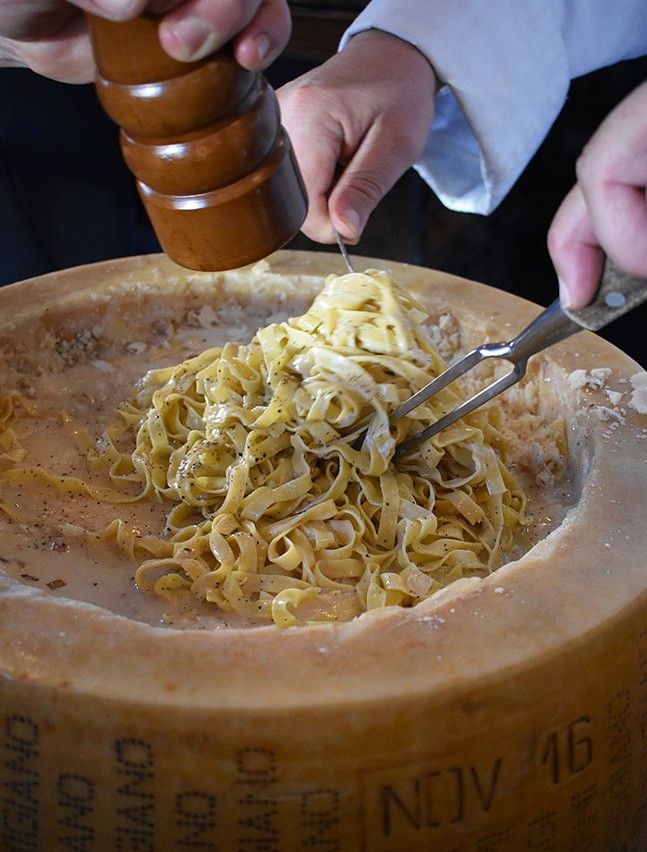 Photo: Sean Enright
Cheese grated on pasta at Spork Pittsburgh
City Paper sent questions to the chef as he was preparing for the event.

How long have you been a chef?
30 years.

Where were you trained?
Le Bordeaux in Tampa, Florida.

How would you describe your cuisine for first-time visitors?
Hyper-scratch.

What's your favorite local product used in your cooking?
Lovage from Spork's garden.

What food trend do you wish would come to Pittsburgh?
All things Peruvian.

What inspired you when creating your Taste30 menu?
We wanted to do lasagna because it's a delicious comfort food that we normally serve only on Mondays.

What drink would you suggest diners pair with the meal?
A medium body red wine would be a safe, traditional pairing, but if beer or cocktails are your thing, then by all means ...

What's your favorite item on your Taste30 menu?
I cannot acknowledge a favorite dish on this menu anymore that I can acknowledge that I have a favorite child. We have to love them all, right?

How do you want diners to feel after eating your meal?
We're in the hospitality business. Danny Meyer once defined hospitality as the absence of wanting. That works for me.

What might diners be surprised to know about you?
I am younger than I look.
Taste30 officially kicks off this Sunday, with the menu available throughout March. For more info on all participating Taste30 restaurants, visit taste30pgh.com.