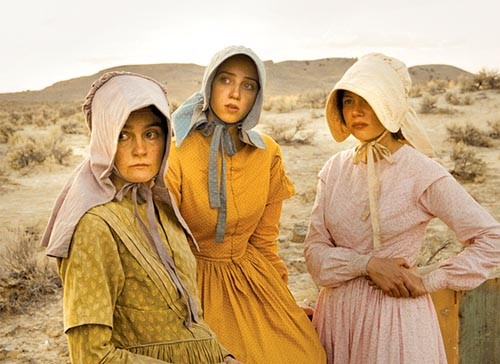 Kelly Reichardt begins her austere historical drama Meek's Cutoff with what may be one of the most simple-cum-authentic portraits of pioneers making their way west: For seven minutes, we watch them -- three wagons, assorted animals and some people -- as they cross a river, do their chores and traverse a brown sun-baked landscape.

We hear the flow of water and the sound of wagon wheels, but no words until the action finally settles upon a child reading the Bible at the evening meal. The actors are more like dancers, using movement, rather than their faces or voices, to tell the story. The first full close-up we see is of a mule.

From there Reichardt follows these three families being led to Oregon, c. 1845, by a cocky guide (Bruce Greenwood, superb as always) who takes a shortcut and gets them lost. Among them is a fair-minded young woman (Michelle Williams) who finally challenges his authority. "I don't blame him for not knowing," she says, as her anxiety quietly mounts. "I blame him for saying he did." So there's some feminist history as well in this portrait of American history, although the two have always been intertwined, despite the phallusies of the history books.

Reichardt is a disciplined filmmaker, and so are her actors. She films many long night sequences in almost total darkness, and Williams, the movie's "star," gets her first close-up 20 minutes into the film. Greenwood is unrecognizable beneath a tumbleweed of hair; Paul Dano has only a few scenes in which he takes center stage. It's all very anti-dramatic, so their encounter with a balding, middle-aged Indian, whom they take captive in a search for water, is tense and rife with myth, fear and nervous fascination.

Jeff Grace's minimalist score never intrudes on Reichardt's drama, and Jon Raymond's balanced screenplay is neither too articulate nor too banal. Still, we could have done without the metaphor of the trekkers' pet, a bird in a cage, tended by the women. A dog, faithful and loving, would have been a better choice: On the trail, the women often walk behind the wagon train in their long dresses and bonnets, and they serve their masters silently. But they also have intelligence, instinct and teeth, and one of them eventually understands that she has to use them. All a bird can really decide to do is pace around and, if it's lucky, fly away.