This Greek estiatorio offers hearty, homestyle fare in a casual, yet refined, setting 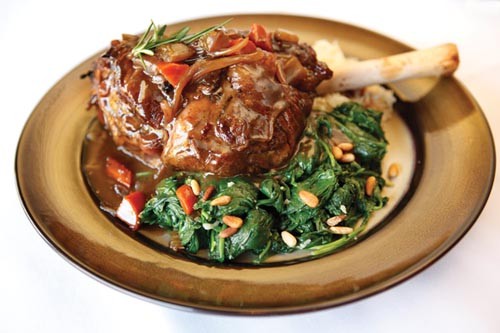 In France, it's called a brasserie, in Italy, a trattoria. In Greece, this kind of restaurant -- relaxed, yet refined, serving traditional hot meals with fresh local ingredients -- is called an estiatorio.

Strangely, this type of Greek restaurant has long been conspicuously absent from the local dining scene, despite its winning combination of homestyle cooking and high-style surroundings -- or, if not high-style exactly, then a few steps above the humble settings in which local Greek food is traditionally served. While the food at Greek diners, cafes, gyro stands and tented church festivals can be good, aside from the de rigueur travel poster of the Acropolis or a Greek island, their ambience usually does little to evoke the storied old-world origins of this vibrant cuisine.

Mediterrano, a Greek restaurant in the near North Hills, brings the estiatorio tradition to Pittsburgh with an ambience that leavens rustic charm (a partition of empty wine bottles stored in stacks of terra cotta pipe) with refinement (a beautifully tiled wood-fired oven situated to welcome diners in the front door).

The artisanal elegance extends to the food: While Mediterrano bills itself as a purveyor of "rustic" Greek and Mediterranean cuisine, don't mistake rustic for plain and simple. Mediterrano doesn't attempt to overlay classic Greek recipes with painstaking gourmet technique, but the dishes are as far from gyro-shop fare as a modern, regional Italian restaurant is from a pizzeria.

A whole fish on ice and an array of fresh produce in the front display case serve as both still life and a message that fresh food is a priority here. The menu extends the impression: With just a few exceptions, every item is named in Greek, and while pita sandwiches and souvlakia are familiar, arni sto fourno (roasted boneless leg of lamb) and domates gemistes (stuffed tomatoes) are examples of less-familiar hearty, sit-down fare. Fortunately, menu descriptions are detailed, and the limited number of entrees in each category -- meat, fish, vegetarian, and "traditional Greek comfort food" (casseroles) -- keeps decision-making manageable.

The starter section is more overwhelming, with fully a dozen options. We got a jump on it while we waited for our table; as we passed the time browsing through a couple of coffee-table books about Greece, a hostess, unbidden, brought us a complimentary dish of hummus with pita and offered to open our wine bottle to sustain us. This made us feel warmly welcomed and contributed to a lovely evening.

There were too many more appetizers on the menu to try them all, but thanks to the pikilia -- a basket of warm, pillowy pita served with three of Mediterrano's housemade spreads -- we got to sample fairly broadly. Melitzanosalata, marinated and roasted eggplant, was thick, smooth and smoky, with sage leaves to add fresh herbal notes. Taramosalata, or "poor man's caviar," was a mousse of roe -- velvety, thick and rich, but perhaps inevitably salty. Most addictive of the three was skordalia, a puree of potato and plenty of garlic with lots of olive oil, creating a boldly flavored, hearty spread. One aspect, new to us, was chopped almond, whose mild nuttiness added both crunch and occasional relief from the intensity of the garlic.

Calamari is standard fare at Italian, and even Continental and American, restaurants, but the Greeks really know their way around tentacles. Mediterrano's kalamarakia was a triumph, with more whole octopus than rings, and rings that were thick and substantial. With no apparent breading, just a flour dusting turned golden brown in hot oil, the calamari's meaty, briny flavor came through, nicely enhanced by a lemon aioli. A platter of this, plus some pita and dip, would make a great meal.

We had our eyes on too many entrees to sample the inevitable Greek salads, but those we saw in transit to other tables looked mouth-watering, made in the village style without any bland lettuce, just bright tomatoes, cucumbers, olives and big, creamy chunks of herb-flecked feta cheese.

The rugged terrain of Greece favors the farming of sheep and goats over cattle, so Jason chose lamb shank for his entrée. He was rewarded with meat cooked to absolute, fall-apart perfection and served on a bed of rice pilaf. Mediterrano used both pine nuts and almonds, the former offering a richer, more tender texture and the latter providing crunch as they did in the skordalia. Better, the juices from the lamb soaked into the rice, extending the meaty flavor.

Angelique had the tomatoes stuffed with asparagus, feta and couscous, with a cinnamon-infused roasted red pepper sauce. The combination of garden vegetables, sweet cinnamon and salty, tangy feta was hearty and satisfying, while a side of sautéed spinach took substance from a handful of crunchy, creamy pine nuts.

A "pitsa" topped with gyro ingredients -- meat, tzatziki (yogurt sauce), tomatoes, cucumbers and red onions -- suggested that when it comes to gyros, the traditional sandwich format is best. The pita "crust" was excellent, but the toppings, sprinkled raw on top, failed to meld as baked toppings do. However, a daily fish special of broiled striped bass restored the standard of excellence which most of our meal upheld: Firm, flavorful fish was delicious on a bed of tender, creamy gigante beans, demonstrating that sometimes the most straightforward dishes can be the most successful.

If the estiatorio is a restaurant concept whose time has come -- and we think it has -- then it's time to go to Mediterrano.