Stretched out in his recliner, Ryan Briggs is having a great nap. Laying there in his Bob Marley T-shirt, you can hear him gently snoring. Although his slumber is intermittently interrupted by a slight seizure, this is starting out as a good day.

At just 18, Briggs has already had a pretty rough life. When he was born, doctor error caused the child to go more than 20 minutes without oxygen. Briggs lived, but is nonverbal and unable to care for himself. Worse than that, though, were the seizures. He experienced close to 500 of them every day — some smaller, others larger and more violent. He received all kinds of treatments and medication, but few of them helped; some made things even worse. But his mother, Diana Briggs, was determined to keep looking for that one thing that would help.

“We went everywhere for treatment,” she says. “We did one called the starvation diet, we did hyperbaric treatments and even went out of the country for stem-cell treatments. But nothing seemed to help. The seizures would get so bad, and they were frequent. We tracked every one of them. In fact, that’s how my youngest daughter learned to count, by counting her brother’s seizures.”

In 2014, Briggs saw a video that changed her life. It provided the same epiphany that parents across the state would have as the video was shared widely. The video showed that oil extracted from marijuana worked to stop the seizures of a 5-year-old Colorado girl named Charlotte Figi. Subsequently, a large group of parents across the state banded together to fight to bring medical marijuana to Pennsylvania. It was an uphill fight, but on April 17, 2016, Gov. Tom Wolf signed the legislation into law, and earlier this year, Pennsylvanians could begin legally purchasing medical cannabis.

There is no question that without the parents of sick children stepping forward to fight this battle, the law would never have been approved. But, as Briggs says, “It’s easy to say no to an adult, but it’s pretty hard to do that to a sick kid who’s suffering.” 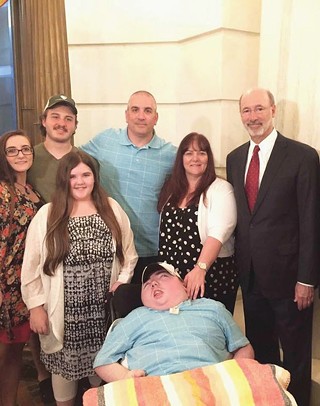 Ryan Briggs and his family pose for a photo with Gov. Tom Wolf the day he signed the medical-marijuana bill into law.

When the World Medical Cannabis Conference & Expo opens in Pittsburgh later this week, there will be many panels on “children and cannabis.” With that in mind, City Paper checked in on some families who have spent the past four years fighting for legalization and see how their lives have changed. Aside from Briggs, we also talked to Heather Shuker, an outspoken advocate for the product and the mother of Hannah Pallas, a 15-year-old who has dealt with intractable epilepsy her entire life.

“A few years ago, Hannah was confined to a chair, she never smiled, she couldn’t lift her extremities, she was non-verbal,” Shuker says, as a walking, squealing Hannah moves about their apartment from room to room. “Look at her now. She has found her voice, and she has found her smile again. It’s an amazing transformation.”

An obvious positive of medical-marijuana dispensaries opening up across the state is having available product close by. But for many parents, this won’t be the first time they’ve purchased these medications. Last year, the state enacted a safe-harbor provision that made it legal for anyone who is qualified to receive the drug to have it in their possession. Many parents began going out of state for the product, and since it was still illegal in several states, transporting it over state lines was a felony. For other parents, though, having safe-harbor protections still wasn’t their first foray into buying medical marijuana.

“I haven’t talked about this much before, obviously, but we’ve been experimenting with Hannah’s medication for a few years now,” Shuker says. Sometime between 2014 and 2015, Shuker began going out of state to get medical-marijuana products. She always traveled by plane and brought the oils back with her on the plane, a nerve-wracking experience. “I knew it was a risk, and I knew it would be bad if I got caught, because someone could try to take Hannah away,” she says. “But my daughter was sick, with zero quality of life. I had to help her, so at the end of the day, it wasn’t really a choice at all.”

Briggs had the same feeling that Shuker did. She would fly to Colorado to get medication and bring it back with her. Once, because of some change she forgot to take out of her pocket, she was pulled aside and given a complete search, including having her bags searched. They didn’t find the oil, but it made for a tense moment.

Because of the cost of going to Denver and the risk, she decided to find a local contact. While she won’t give many details about the person or the transactions, she says the dealer became part of the family.

“That first Christmas, I baked him some cookies,” Briggs says. “I didn’t think it was strange at the time. I’m a mom — that’s what we do for family and friends, we bake cookies.”

The other thing moms do is help others in need.

In order to receive medical marijuana, a patient has to have one of 17 qualified conditions. If the patient can’t get their own medication, they can use a qualified caregiver, and that process takes about a month. Recently, Shuker got a call out of the blue from a man whose mother was in hospice care and completely out of it, during what were the last days of her life. The man asked if she knew how he could get medical marijuana.

Shuker decided she would help the man and contacted Briggs to figure out how. If you are a caregiver, you can be a caregiver to up to four patients. Briggs found a doctor willing to go to the woman’s home to check her out and qualify her for the medications. Shuker then obtained the medication, and the woman began taking it.

“Her son said she was in a fog and was hoping that medical marijuana would help make her last days comfortable, but not in an opioid haze,” Shuker says. “I took her the medication, and she was able to spend three days with her family and didn’t take anything other than medical cannabis.”

Briggs realized that legalization wasn’t the last hurdle in this battle, because people would still need help getting educated about and navigating through the system. In an effort to help other people, Briggs launched a new business, PA Compassionate Caregivers. Since most caregivers aren’t dealing with four patients at once, they can help people in the interim until their own caregivers get certified. Briggs says the service will connect people with a caregiver and a doctor to make sure they have a qualifying medical condition.

The low snore coming from Ryan Briggs has gotten a bit louder. He’s in a deep sleep, and that’s because of his medication. The sound is music to Diana Briggs’ ears. Prior to his cannabis treatments, Ryan didn’t sleep much. But who could sleep while going through a series of grand mal seizures? It’s a simple wish — for your kid to sleep peacefully — but until medical marijuana, it was one that Briggs couldn’t grant until now.

“I know that Ryan is never going to be able to walk or talk, but he deserves the best life that we can give him,” she says. “Right now, he’s averaging fewer than 100 seizures a day, and sometimes that number is under 50. And for the first time in a long time, he can sleep for 10 to 12 hours a night and get the rest he needs.

Sitting in her home a few hours earlier, Shuker agreed. Although she doesn’t have to say it in words, she can just point to her daughter. It’s Hannah’s 15th birthday, and she’s spending it differently than she has in the past. Rather than sitting balled up in her wheelchair waiting for the next seizure, she’s gleefully walking around her house getting ready to go out for the day. And this time, she and her mom won’t be taking the cumbersome wheelchair.

“She won’t sit still anymore,” Shuker says with a laugh, as her daughter lets out a loud scream. “She also won’t stop yelling. But I get it. For the first time in a very long time, she hears herself and sees herself walking. She doesn’t want to stop. It’s also nice to see her personality coming out. She’s even developed a teenage rebellious streak.”

It’s true. Like a lot of teenagers, Hannah seems to push the envelope to see how much she can get away with. Because of her history of serious seizures, Hannah wears a helmet — well, most of the time. As she trots around the house, Shuker tells her daughter to get her helmet. Hannah retreats to her room and carries it out. When her mother tells her to put it on, she squeals at her and shakes the helmet in a way that seems to say, “You told me to get it, not wear it.”

Hannah’s progress has been remarkable in the past year. She began walking more and, at the end of 2017, she smiled — a simple act that she hasn’t done in years.

“Seeing her smile then and now, it’s amazing to me,” Shuker says. “For the first time in years, I have my daughter back. This is true quality of life.”

In her short lifetime, Hannah has had more than 100,000 seizures. On an average month, she would have hundreds, if not more than a thousand. Last month, she had five. Shuker says not only is Hannah able to do more, but this new period of calm is giving her brain time to heal from the trauma of years of violent seizures.

Hannah has a therapist, and a teacher who comes to the home several times a week. And she is becoming more active since finding her voice. In a year full of major progress, Shuker is hoping for another big milestone in Hannah’s life.

“I’d love to hear her talk again. She was able to say a few words when she was much younger,” Shuker says. “They told me she’d never reach her teen years, yet here she is turning 15 today. I thought she’d never walk again or smile again, but look at her.

“That is one of the most determined little girls I have ever met. I’ll never say never.”

Pittsburgh to get its first drive-through medical marijuana dispensary