Meat is the word on this year's Heinz Field menu

The Bacon, Egg and Cheese Dog is a footlong frank, wrapped in bacon and topped with cheese, chipotle mayo and a fried egg 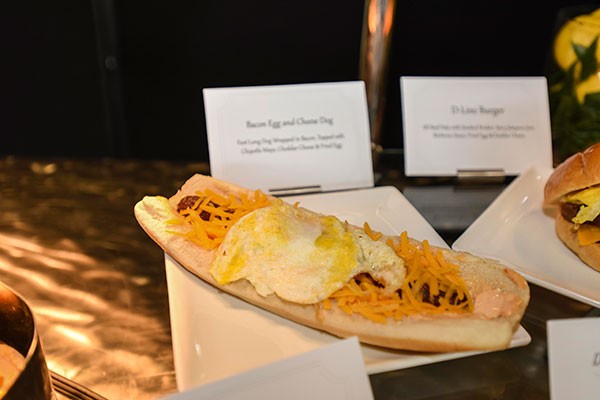 Photo courtesy of Aramark
The Bacon, Egg and Cheese Dog, available in the club-level sections at Heinz Field

A marquee new-menu item at Heinz Field this year: the Bacon, Egg and Cheese Dog. (Like many of the higher-end options, it's only available for Club Level ticketholders.) The dog is what it sounds like: a foot-long frank, wrapped in bacon and topped with cheese, chipotle mayo and a fried egg.

"There are a lot of day games scheduled this year," says Aramark general manager Dominic DePaola, who oversees concessions at Heinz Field. "So, that one takes care of breakfast, lunch and dinner!"

Many of the new options seem designed to help you make next year's offensive line — the overarching theme might be "meat on meat." The D-Line Burger (also on the Club Level) has smoked brisket, jalapeño jam, barbecue sauce, cheese and a fried egg on it. The Emperor Burger — available to all ticketholders — honors Chuck Noll in its name, and Pittsburgh's culinary history in its contents: It's a beef burger with shaved kielbasa and onion-bacon sauerkraut on it.

DePaola notes, though, that vegetarians aren't completely out of bounds at Heinz: There's a plain pizza, offered this year by Fox's (a new partnership with Heinz Field). And there are gluten-free options available.

There are city-specific options at stadiums throughout the AFC North, if you're planning on heading into enemy territory this fall. Baltimore's M&T Bank Stadium, for example, has items like Crab Tots (tater tots with crab dip). Sounds tasty, sure, but nothing says smash-mouth Steelers football like three kinds of meat at once.