It seems fitting that the tastemakers at the Pittsburgh Cultural Trust — the group primarily responsible for transforming Liberty Avenue from red-light district to Cultural District — should include a restaurant among their menu of Downtown properties. They don't actually run the restaurant located in Theater Square, of course, but they have twice selected restaurateurs to fill the space. By our lights, they've both been good picks, each satisfying an appetite for stylish dining. Eight years ago, Cafe Zao offered a modern take on Portuguese cuisine in an atmosphere of formal elegance. Zao has now been succeeded by Meat and Potatoes, helmed by Richard DeShantz, who's already made a successful Downtown showing as chef/owner of Nine of Nine just up the street.

For Meat and Potatoes, DeShantz has brought together several current trends to create an up-to-the-moment urban dining experience. First and foremost, as signified by the name, Meat and Potatoes emphasizes the traditionally satisfying staples of the American pantry, treating them as worthy subjects for culinary exploration. Next up is the concept of the gastropub, several culinary steps above a mere tavern in its carefully curated offerings of good drinks and well-prepared foods. Finally, Meat and Potatoes gives a nod toward the nose-to-tail movement — the idea that every part of the animal can, and should, be served.

DeShantz hasn't gone all-in on that concept, but we took the large blackboard drawing of a steer, divided and diagrammed with the day's offerings, as a pretty clear indication of intent. As we did the marrow bones we ordered — three beef shanks of dinosauric proportions sliced lengthwise and roasted. In truth, we were underwhelmed by a dish that seemed to be more about the idea than the outcome: The marrow in these bones lacked the almost pudding-like texture we're familiar with from the marrow in osso bucco; instead, it was more like the edge of an untrimmed ribeye. 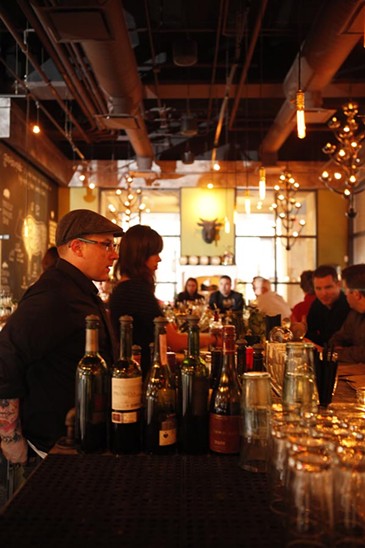 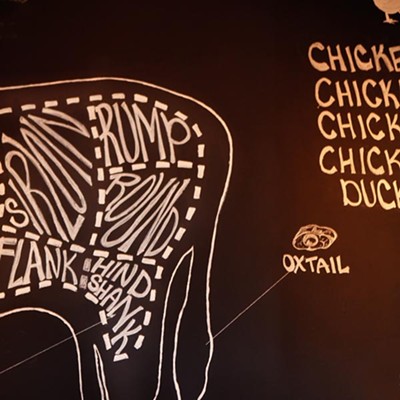 That isn't the worst thing in the world, especially with grilled bread, gremolata and a few other little bowls of condiments to round things out. But when it came to filling up on bread and spreads, Angelique far preferred that smoky grilled bread with goat-cheese butter and house-made rhubarb jam.

We're not sure how you make butter from something that's already cheese (perhaps it's a blend?), but the result was creamy and rich, with just a hint of tang balancing its sweetness. Buttermilk-fried chicken livers were rich as well, the size of chicken nuggets but with a texture closer to that of oysters or, naturally, a loose pâté. But served piled up in a little paper tray, the fried livers quickly grew soggy, so that after the first few, the contrast between crust and flesh faded. In a way it was just as well; a few of these lush, intensely flavored morsels sufficed.

Of the three flatbreads on the menu — mushrooms with taleggio; Italian cured meats with provolone; and short ribs with blue cheese, cheddar and arugula — we chose the last. To the kitchen's credit, an excellent crust — cracker-thin and crisp at the edges with just enough chew throughout — took center stage, with the toppings arrayed to provide flavor.

As you'd expect, this is a kitchen that knows how to handle a burger. A homemade bun sandwiched a well-proportioned patty that was crusty, just a little loose and perfectly juicy. The kitchen showed it can play even further afield with its superb gnocchi: light and pillowy, almost airy, inside with a more substantial exterior. (We suspect some alchemy in the kitchen; if these are made using traditional methods, then we're simply in awe.) A hearty Bolognese sauce containing short rib, pork shoulder and pancetta was worthy of this pasta.

After all this, we expected great things from the chicken pot pie, but it didn't deliver. Served in a cast-iron dish with top crust only, it was adequate in its components: tender chicken, well-cooked vegetables (though the potatoes were a bit firm) and a nicely browned, flaky crust. But the gravy, which should have held the underlying stew together, was unconscionably thin, almost watery. Adding little flavor, it streamed off the fork, taking the chunkier ingredients with it.

A modest dessert of key-lime pie, served in a glass tumbler as a sort of parfait, was a pleasant finish, and allowed us to reflect on our overall experience. The decor, a sort of shabby-chic blend of cushy chairs and butcher block, mirrored walls and blackboards, was extremely warm and inviting without sacrificing a sense of occasion. The menu managed to add intrigue to the humble and familiar without resorting to stunt ingredients. The cocktails were suitably fashionable. And if one or two dishes were ultimately disappointing, the most successful were dazzling. This is Meat and Potatoes' moment, and it knows it. 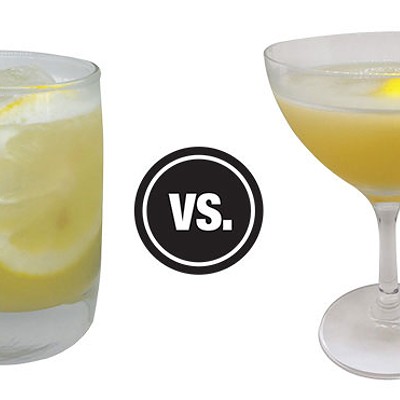 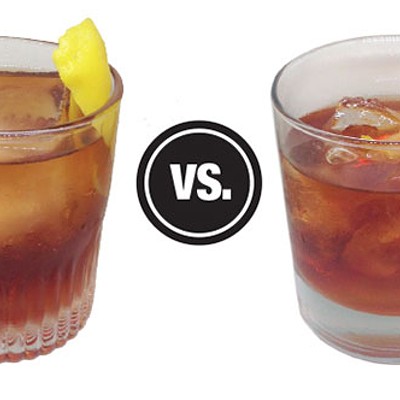