Meals on Wheels: Pittsburgh's food truck community is growing despite regulations meant to keep it at bay

"I think Pittsburghers are ready for it and want it."

Photo by Heather Mull
A Food Truck Roundup, featuring the Franktuary Truck and the Pierogi Truck, took place July 28 at a parking lot on 43rd Street near Butler Street in Lawrenceville.

From the window of the Pierogi Truck, where customers have already lined up, Lynne Szarnicki doesn't need a hard sell for the homemade Polish specialties she offers hot or frozen. But she has fun being the pitchman anyway.

"You can buy now for Christmas, if you wanted. What do you think about that?" she says to one customer. To another, "They're real easy to cook. Just add butter and onions, and you've got church-lady pierogies."

The customers eat it up at the Green Tree Park farmers' market as a steady stream of them hand Szarnicki cash. One, Banksville resident Alfonso Danzuso, chides her for her absence a week earlier.

"I got upset," he says. "I come every Thursday, and I get these pierogies. They're good."

So good, in fact, they're currently illegal — at least within Pittsburgh city limits.

Operating in the city is a gamble. Vendors such as Szarnicki operate out of mobile kitchens —   often refurbished postal or newspaper-delivery trucks — using social media to broadcast their daily locations to attract large crowds. And if that isn't hard enough, they also face a daunting and convoluted regulatory environment above and beyond public-health safety rules.

For example, the city's rules prohibit parking in metered spots, and require vendors to move every 30 minutes and to keep trucks at least 500 feet away from a business selling a similar product.

The rules, vendors argue, are intended to stifle the competition they offer traditional brick-and-mortar restaurants.

"At any given point in time, I'm sure no matter what we're doing, someone can tell us we're not allowed to be doing it," says Tim Tobitsch, co-owner of the Franktuary Truck, a pioneer in the local food-truck industry that has sold gourmet hot dogs for about two years.

A look at the history of the vending law, which Pittsburgh officials first tightened in 1987 and have revised several times since, shows that changes were motivated by complaints from business owners with storefronts who felt street vendors and peddlers had unfair advantages. 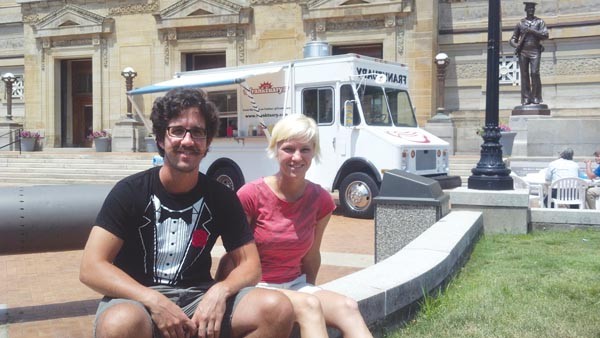 Photo by AmyJo Brown
Tim Tobitsch and Megan Lindsey, owners of the Franktuary Truck, a pioneer in the local food-truck industry.

But while the rules might have limited the number of food trucks in the past, a growing number of Pittsburgh entrepreneurs like Szarnicki are seeing opportunity in the gourmet food street-vending trend and are deciding to make a go of it despite the restrictions.

This summer alone has seen the launch of the Pierogi Truck, Oh My Grill (a specialty grilled-cheese truck) and the Dozen Dessert Truck (baked goods). With the arrival of the soon-to-open Taco Truck, the number of such businesses on the road in the Pittsburgh area will have more than doubled.

Doreen Valentine, owner of the Dessert Truck, says there is a demand for food-truck fare.

"So many other major cities have a huge food-truck scene. People always complain that Pittsburgh is behind the times. Why can't we for once not be lagging behind?" she says. "I think Pittsburghers are ready for it and want it.

"But because of the laws, we can't get it out to the people the way that it could be."

But that doesn't mean they've been completely stifled. Some decided to break the rules and sell their food anyway, risking the consequences.

Szarnicki, who launched her truck in June, has permits from both the Allegheny County Health Department and the state Department of Agriculture, which allow her to serve food anywhere in the county and state.

But because she doesn't have the additional mobile-vending permit the city requires, she cannot serve from public property or streets in the city. The rules are unclear on whether private property is fair game, even with the permission of the property owner. 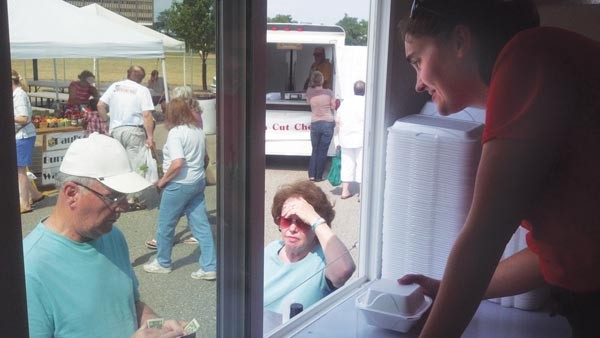 Mary Fleming, assistant director at the Bureau of Building Inspection, says that a mobile vending permit is not required to park and serve on private property — but an occupancy permit with the approval of the Pittsburgh Zoning Office is.

Zoning Administrator Susan Tymoczko, however, says that's not necessarily the case. But she also says that the office doesn't have explicit rules for trucks that park temporarily in locations for short periods of time.

"I would recommend to anyone to come into the zoning office and speak with us directly," she says, adding that each request would be a case-by-case determination.

Tobitsch, of the Franktuary Truck, says his company did that ... once.

He and co-owner Megan Lindsey made it a point at the beginning to do everything by the book. They applied for zoning approval for a parking lot on the South Side that they planned to use regularly.

They had a hearing, a process that took more than three months between the time it was scheduled to the final vote. They also paid the fees for the process, about $600.

Ultimately, it turned out that the parking lot they wanted wasn't a good fit for the truck.

That experience — combined with obstacles like trying to safely move the truck every 30 minutes with hot oil percolating in the back — changed their perspective on following the rules.

"After that first season, we learned that even if you want to go by the book, it's not realistic," says Tobitsch.

The Franktuary truck owners, who have their county health-department permit, say their modus operandi now is to skirt the rules that don't make sense and try not to go any place where they might provoke a complaint.

"Our experience is that if no one is complaining and everyone around you wants you to be there, we're fine," Tobitsch says. "We go where we're invited."

Although they've been asked to move a few times by police officers and, and were chased away from a family movie event at Schenley Park by someone who threatened to call the police, they've never received a citation.

Photo by AmyJo Brown
As stationary vendors, food trucks parked along Margaret Morrison Street, near CMU, fall into a different category of regulations than mobile vendors.

Szarnicki says her pierogies will eventually be available in the city limits, and that it's not the city's restrictive rules for food trucks that is stopping her — it's the $700 annual permit fee that is not pro-rated. If she were to pay for the permit now, she would have to do it again in January.

"I'm not scared of it or anything," she says of the city and its rules. "Once I get a permit, my plan is just to go," she says. "I'll be done and gone before they even know I was there."

Pittsburgh's mobile-vending ordinance became what it is today in large part in 1987, when the 30-minute time limit and 500-foot distance requirement were added. The prohibition against vending from metered parking spaces was added in 2000.

According to Pittsburgh Press and Pittsburgh Post-Gazette accounts at the time, the revisions were prompted by feuds between the owners of floral shops and flower peddlers. It was later reinforced when similarly competing interests selling University of Pittsburgh merchandise were at odds in Oakland. The brick-and-mortar business owners argued that the peddlers had the unfair advantage of free use of the sidewalks and were able to lure business away with cheaper prices. City officials said vendors were essentially "establishing permanent locations in the public right-of-way," according to an October 1990 article in the Pittsburgh Press.

When complaints come in today, says Fleming, they tend to involve peddlers selling merchandise at sporting events and the city's annual Light Up Night. Many of those cited are out-of-state companies, she says.

Information on the precise number of citations issued over the past few years is not available, Fleming says, adding that citations are turned over to the district court in the areas where the violations occurred. Fines can range up to a maximum of $300 per violation.

"They're far fewer than we've had in years past," she says.

Fleming says that with just 21 inspectors, she doesn't have the resources to chase after food-truck vendors who might be breaking the rules. Responses, she says, are complaint-driven.

"I have to use those rules," Fleming says. "Perhaps they ought to get together and approach someone about changing the rules. That's how things get changed."

If the rules were changed today, would food trucks still run into opposition from brick-and-mortar restaurants?

"I think you'd get complaints from merchants," says Becky Rodgers, executive director of Neighbors in the Strip, a nonprofit community group that represents many of the businesses along Penn Avenue. "I kind of have a feeling that it would be looked on as they're trying to take advantage of the high traffic in the Strip."

"I can see a challenge to that," she says. "How do you make sure it's fair and equitable to everybody?"

Pittsburgh is not alone in facing these questions. As the food-truck trend grows, cities across the country are struggling with how to fit them into their marketplaces. Variations of proximity bans, duration bans and restricted zones are in place even in cities where food trucks are popular, such as Portland, Ore.

(As stationary vendors, established food trucks in Oakland near the universities fall under different regulations.)

For their part, city officials say the issue with mobile vendors hasn't yet risen high on the priority list. One advocate the industry might have is Pittsburgh Councilman Bill Peduto, who has thrown several events this summer with the help of food-truck vendors. Peduto says he agrees the rules are too restrictive.

A proposal to make changes is in the works, he says. But, "right now," he adds, "I don't have the specifics," and "there is no timeline on when the introduction will be."

Vendors aren't unrealistic and agree that some restrictions may make sense. But the debate over whether food trucks are unfair competition doesn't.

"We have seen both sides, and we know with certainty: It's really hard to do both," says Lindsey, who also owns a brick-and-mortar Franktuary location Downtown.

"I would never consider it unfair," says Valentine, who also owns two brick-and-mortar locations in addition to the Dozen Dessert Truck. "It's just a different kind of menu to me."

And Szarnicki, of the Pierogi Truck, says food-truck vendors are sensitive, too, to where they locate.

"I'm not going to go right outside of S&D Polish Deli in the Strip and go, ‘I'm selling pierogies today,'" she says. "You know why? I'm not an ass. That's just wrong."