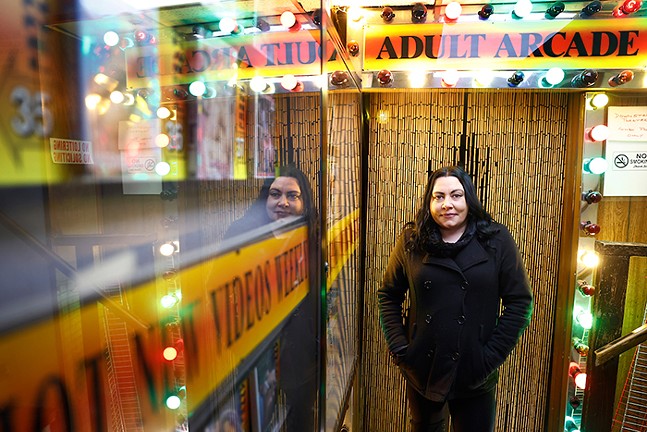 CP Photo: Jared Wickerham
Manager Margo Kalamets poses inside Modern Adult 711 on Sat., Feb. 5, 2022.
It’s early afternoon on the last frigid Monday in January, and the parking lot of Modern Adult 711 in McKeesport is packed. New-model pickup trucks are waxed to a high shine against the crust of road salt that plagues Pennsylvania drivers in winter, and the beaters parked next to them have turned dull under coats of grime. Now that the trees, which used to screen the parking lot from view, have been cut back in an effort to make the two-story cinder block bookstore more welcoming, a person lingering among the parked cars and looking north across West Fifth Avenue can see the gleam of the Monongahela River just a few hundred yards away, or the piles of compacting aluminum in the scrap yard on its bank, all of it seemingly polished and sparkling in the rare high sun.

But in the parking lot, no one lingers. Some men idle in their cars, waiting — for their courage, maybe — before stepping onto the asphalt; but, in the lot itself, all people move purposefully to or fro. Visiting an adult bookstore is perfectly legal, but socially it can be risky, particularly in McKeesport, which, like Pittsburgh, is technically a city but often functions as a very large small town where everyone seems to know your business. Then again, the men’s hurried pace may simply reflect a wish to get out of the bitter, snapping cold.

In 2014, the strip club Saints and Sinners planned to open in downtown McKeesport by Valentine’s Day, but was faced with heavy protests; the building burned down in early 2015, and a cause was never found. Soon after the fire, the McKeesport city council designated this remote, industrial strip of West Fifth Avenue near the Mansfield Bridge as the only zone in McKeesport where “adult entertainment” is legally permitted to operate. The bookstore had already been doing business on that strip since 1978 under a number of different names, owners, and street numbers; in 2006, Beemer’s Gentlemen’s Club opened just down the road.

As the Tube City Almanac reported at the time of the 2014 city council ruling, Mayor Michael Cherepko clarified that “city officials can not refuse these sexually oriented businesses from coming into the city. ... We have decided to only permit them to come into one small section of the city [which] will significantly decrease the opportunities for these establishments to come into our town in the future." In 2006, news reporter Marty Griffin, known for his sensationalist approach, aired multiple teasers for a KDKA story exposing a local pastor's visit to the bookstore, leading to the pastor’s death by suicide at a Mercer County motel. Due to the pastor's death, KDKA pulled the full news story before it aired, but the damage was done. The story picked up a great deal of coverage, most of which amplified the homophobia in Griffin's reporting, marking the bookstore as a site of shameful activity and a blight on McKeesport. 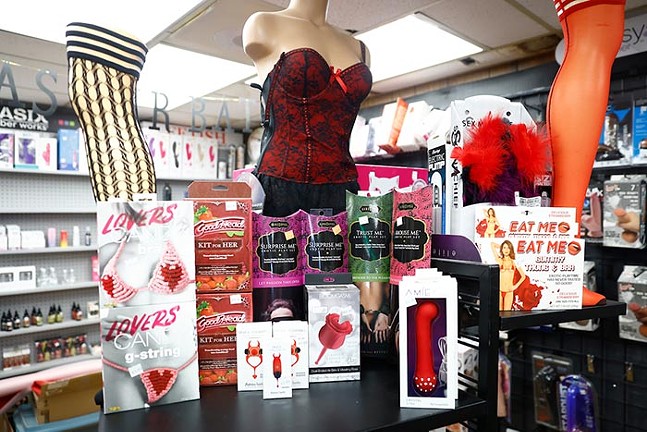 Kalamets is working on changing that. In her two years as store manager, most of which have coincided with the COVID-19 pandemic, her goal has been to make the store more welcoming without apologizing for what it is or turning it into something else. Instead, she has physically cleaned it up.

Next, Kalamets tells me, she hopes to cover a whole section of the hallway upstairs in chalkboard paint so that customers can write “all over, whatever they want.”

As we speak, business remains steady, even in the middle of a weekday afternoon. Men enter the store every two or three minutes; most spend $5 for 30 minutes in the upstairs video booths, while others hand over $20, which buys them three hours in the store, including access to both the upstairs booths and to the cinema on the ground floor. Under Kalamets’ management, Modern Adult 711 now shows the most recent 2021 films in a space where strangers have been watching sex on screen since before the Mon Valley deindustrialized, before the AIDS crisis, before the state of Pennsylvania once banned the sale of pornography in 1980.

Many of the men who visit Modern Adult 711 while I’m there are regulars, and some of them have been coming for decades. While Kalamets says most are local, others drive from hours away. Most stop to chat with Kalamets, who is shivering in her peacoat (the bookstore has no heat, and on the day that I visit, the owner is looking at installing gas lines which the building has lacked since it was built), but she still manages to banter back and forth over the counter to the men as she doles out handfuls of tokens for the video booths upstairs; each one granting them a few more minutes of pornography on the booths’ small screens.

One man, who takes the bus to the store every day, offers Kalamets some cookies then rifles through his bag to see what other snacks he can offer; she admonishes him to be careful on the ice. When he heads into the theater, Kalamets says he’s been coming to the bookstore quite often since his wife passed, and both of his parents are dead. Another regular asks if I am Kalamets’ boyfriend, but when she tells him I’m a reporter, he’s just as friendly as before, even before I interject to assure him that I’m a sometimes-customer here as well.

I ask Kalamets what she thinks the men get out of their time at the store, hoping to get at something existential, but she interprets my questions literally and protects her customers’ privacy: “I try not to ask what they do upstairs.” Kalamets, who is working in the adult industry for the first time after "uninspiring" retail jobs and a period of unemployment, is also putting herself through mortuary school, and is invested in her job to a degree that at first surprised me. Her work in sex and death, however, are in some ways about the same thing: intention, vulnerability, and care. In both arenas, Kalamets uses humor to make people feel comfortable and to deal with the tough stuff. She calls herself a meme queen, and while we shoot the shit between customers, she shares one of her jokes, inspired by her mortuary studies and her day job: “Every woman’s a squirter when you hit a major artery.”

CP Photo: Jared Wickerham
AdultMart along Boulevard of the Allies in Downtown Pittsburgh
Her regional manager is just as passionate about his work. It seems that Modern Adult’s acquisition of the McKeesport bookstore has allowed the local business to expand its offerings and to fill a niche that is increasingly unoccupied. An employee at the Smithfield Street AdultMart in Downtown Pittsburgh, which is owned by a national chain, told me over the phone that AdultMart corporate decided to close the booths and back rooms in its stores some time in 2019 but the employee couldn’t give a reason as to why. Many other back rooms and adult cinemas closed in early 2020 and don’t seem likely to reopen, while increased police presence and digital surveillance has made public cruising venues more risky and less well-trafficked.

Grayson McCaleb, regional manager for Modern Adult LLC and manager of the Erie store, got into the adult retail industry by accident after working as a hairdresser. At first, he worked for the AdultMart in Erie, but says he was put off by corporate rigidity; at Modern Adult, he says he has room to grow. “I want to remove the stigma that is shame around sex,” says McCaleb. “In our stores, we promote sexual activity, even sexual promiscuity. I don’t know if that’s the right word, if we promote those things so much as we promote sexual freedom.”

When he talks about visiting the McKeesport store before Kalamets started working there, McCaleb admits he was “disgusted,” adding, “It was archaic, but I could see the potential.”

Kalamets alleges that past management let some things slip, and says she’s working on improvements, like getting T-shirts for her staff so that when they come upstairs to fix something or deal with a problem, they can identify themselves to make it clear they’re not trying to cross boundaries with customers or be intrusive. The only customer Kalamets says she ever kicked out was rowdy, drunk, and disturbing other people by banging on their booths. Both she and McCaleb independently express grief over customers claiming that clerks at other adult bookstores have made them feel ashamed and unwelcome. “I should be helping them feel that it’s OK,” says McCaleb.

McCaleb also notes that the pandemic increased a need for their industry because “people were forced to look at each other, to be with each other without distractions. When we stop to look at our lives and evaluate them, we understand that we need way more interpersonal contact than we’ve had.”

For McCaleb, the privacy and anonymity of the booths create possibilities for people to connect, to touch, to experience pleasure, to come to know themselves and to surprise themselves in ways they might not otherwise.

CP Photo: Jared Wickerham
Products for sale inside Modern Adult 711
Going to the bookstore, he notes, is nothing like being penciled in for a hookup on one of the apps, though Kalamets does mention that people seem to be using apps to coordinate meetings at the bookstore more and more. According to McCaleb, the McKeesport store sees far more traffic in its back rooms than any of the other Modern Adult shops — in Erie, Toledo, and Parkersburg, W. Va.

While the majority of its customers are men, every kind of person visits Modern Adult. Kalamets has instituted Ladies’ and Couples’ Nights — Wednesdays and Saturdays, respectively — during which those demographics receive 20% off their in-store purchases. “Couples will come in and spend two, three, four, five, six hundred dollars in a night,” Kalamets says. “They’ll come back every two weeks.”

On the single afternoon when I stood by the register in reporter mode, I saw men alone and in pairs, buying gifts for their wives and wandering into the back room seeking immediate pleasure. These men were Black and white, young and fat, old and thin. Anxious and easy, straight or gay, or unconcerned. Some were masked and others not.

Kalamets has big plans for the store. She wants to open Western Pennsylvania’s first Virtual Reality room, and to give the building a new paint job, a heating system, and a wider and higher-quality selection of toys. In the absence of trees, the hillside that abuts West Fifth Avenue is growing wild with knotweed, which she plans to eradicate.

“If I have to run that rototiller myself, I’ll do it,” she says. Her goal is not respectability or gentrification, she says, but respect and pleasure, privacy and autonomy, a refusal of shame.Dade Lemanski lives in Wilkinsburg. They were a Fall 2021 Writer in Residence at City Books, and they are at work on a book about race, desire, and Jewish poets in Appalachia. You can follow them at twitter.com/dclarkwithane. 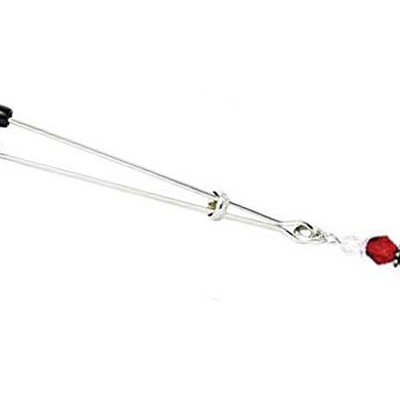 Don’t overeat before getting physical with these small plates

How the pandemic led to better sexual relationships with ourselves

How to have a hot Tinder profile 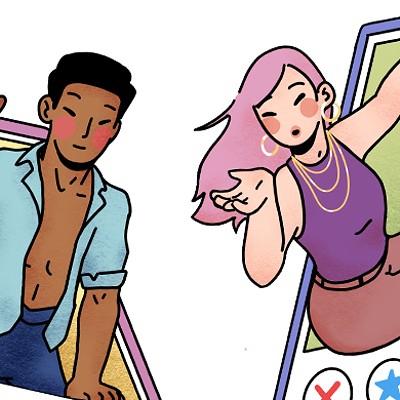