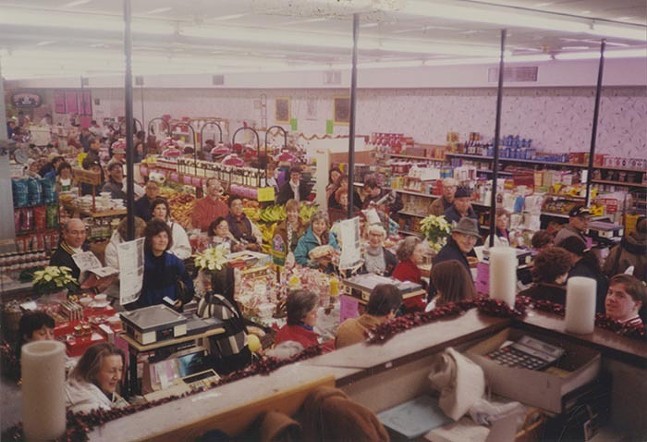 “They were always supporting local farmers,” says Young, daughter of the late Sharon McGinnis Young, one of the three sisters who owned and ran the independent market’s various stores for decades. “They were not like these larger chain grocery stores, which were importing products from South America or other kinds of global markets.”

Young is the historian for the American Food History Project at the Smithsonian National Museum of American History, through which she hosts the cooking demonstration series Cooking Up History. She also co-curated the museum’s recently refreshed food history exhibition, FOOD: Transforming the American Table, and is currently working on two books — an academic manuscript about New Orleans’ street-food culture and a biography of Creole chef Lena Richard.

She credits her mother and aunts for sparking her work in food history and culture, much of which highlights and provides a platform for “really diverse women entrepreneurs” to “share their stories and talk about the importance of women, business owners, and community activism through food.”

Image: Courtesy of the Detre Library & Archives at the Heinz History Center
McGinnis Sisters Sharon Young, Bonnie Vello, and Noreen Campbell
All of the McGinnis Sisters stores closed by 2019, ending an era of what Young sees as an innovative approach to serving the needs of shoppers in the Pittsburgh region. What started as a produce stand run by Young’s grandfather in the 1940s grew over time to include stores in Brentwood, Monroeville, and Butler County. She explains that her mother and aunts took over running the business in the 1980s, becoming early leaders in the local gourmet and specialty food business.

Young says that her mother and aunts recognized that people wanted more of a variety, including cheeses and oils that they had while traveling to or living in another country. This was especially needed in times when choices at larger grocery chains were very limited.

“You have to keep in mind, this was in the '80s going into the early '90s,” says Young. “People in Pittsburgh ate American cheese or maybe mozzarella because of the Italian population. But they did not know about Camembert and Brie cheese and Asiago cheese.”

She says the sisters saw the demand for organic food and international cuisine long before Whole Foods and Trader Joe’s moved into the city and made such products more widely available.

“They saw that there was a niche there for that kind of market,” says Young. “They found mentors who were in the kind of fancy food or gourmet food realm nationally, chatted with them, learned who the buyers were. They started going to the Fancy Food Show in New York, they started going to the restaurant shows in New York and Chicago to meet with these high-end chefs and learn the kind of cutting-edge food trends across the nation. And then they were bringing that back to Pittsburgh.”

She adds that large regional chains like Giant Eagle soon noticed the appeal of McGinnis Sisters.

“Some of those competitors would come to the family business and see what we were doing, and how we were supporting local farmers,” says Young. “And they would take that back to their stores and incorporate it into their model. … And my aunts would say, that’s the greatest form of flattery.”

McGinnis Sisters were also ahead of their time in terms of adopting online grocery ordering in the late 1990s, something that has become more common with services like Instacart.

Young, who worked in the stores with her family, believes that McGinnis Sisters fell victim to major changes in the grocery retail industry over the last decade. Developments like the proliferation of Giant Eagle’s more specialized Market District stores made it more difficult for smaller, family-owned businesses to keep up. She cites how The Uncommon Market, a specialty food store on Route 19 in Bethel Park, also closed around the same time as McGinnis Sisters.

Young admits that, as a consumer, she finds it increasingly difficult to balance supporting local businesses in a climate where shoppers can easily order food from corporate giants like Amazon, which acquired Whole Foods in 2017.

“I live in a contradiction myself, you know, in the sense that I live in Washington, D.C., I don't have a car, I don't live near a good grocery store,” says Young. “And so, my life now is this hybrid of ordering from Amazon Fresh and going to the local farmers' markets. … Even for me, as someone who's committed to studying the kind of resilience and entrepreneurship of family-owned, women-owned businesses, even I'm patronizing those larger industry competitors.”

Young hopes to honor the legacy of the McGinnis sisters by humanizing them and showing that, while these women were a source of inspiration, they still faced the same challenges as any business owners, “bringing in products that totally flopped and just kind of flying by the seat of their pants at times.”

“My mom and aunts were and are my feminist icons,” says Young. “I identify as a feminist, and even if they themselves don't necessarily use that terminology, the kind of strength that they demonstrated and continue to demonstrate is really inspiring. And I'm hoping that it's not just inspiring to me as their daughter and their niece, but that others who attend the program will recognize and honor and appreciate the kind of barriers that they broke as women in that industry.”
Remembering the McGinnis Sisters: Food & Family Stories. 7-8:30 p.m. Tue, Dec. 14. Free. Registration required. heinzhistorycenter.org/events

A week for farmers markets, a loss for Bloomfield, and more Pittsburgh food news