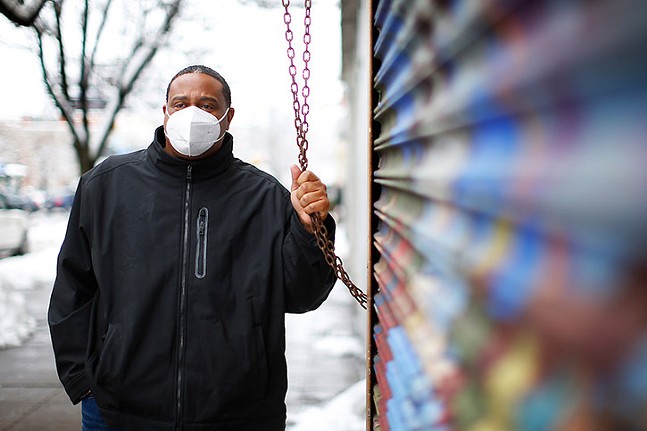 CP photo: Jared Wickerham
Ed Gainey
Coronavirus cases have stopped spiking in Allegheny County, but there are still regularly hundreds of new cases a day. And even as the pandemic rages on, evictions are still occurring, leaving people without homes this winter. Pittsburgh City Councilor Deb Gross said during a council meeting on Tuesday that over 100 families are currently facing eviction proceedings in Pittsburgh.

Tenant advocates and city council candidate Bethani Cameron are calling for the city to enact an eviction moratorium to address this issue, especially during this time period when people haven't yet received their second coronavirus stimulus payment. And now state Rep. Ed Gainey (D-Lincoln-Lemington) is joining the chorus.

Gainey, who is running for Pittsburgh mayor, is calling on city council and Pittsburgh Mayor Bill Peduto to amend the city's emergency declaration to include an eviction moratorium. The city of Harrisburg created an eviction moratorium for nonpayment of rent in January, and, in a statement, Gainey says the Pittsburgh has the legal authority to do the same, adding that it’s “a moral obligation to protect the health and safety” of Pittsburgh’s residents.

“The [mayoral] administration and city council must follow the lead of cities like Harrisburg and take swift action to incorporate an eviction moratorium into the City’s COVID-19 Emergency Declaration,” says Gainey in a statement.

Peduto spokesperson Tim McNulty says the mayor believes renters need protection during the pandemic, and Peduto is doing so by working with city council to enact a policy that would essentially act as an eviction moratorium.

“Mayor Peduto’s priority is protecting housing-insecure neighbors during the pandemic through strong eviction moratoriums at the local, county, state, and federal levels," says McNulty in a statement. "Instead of debating emergency orders, the Peduto administration is working cooperatively with Council members and the city’s lawyers to swiftly find a legitimate legal path that will actually protect people.”

On Feb. 17, Pittsburgh City Council President Theresa Kail-Smith said city council wants to do something to stop evictions during this gap in between stimulus funds, but doesn't currently support amending the city’s emergency declaration.

Kail-Smith said she spoke with the city’s law department who said there are concerns over how the eviction ban would be enforced, and told Pittsburgh City Paper the city is hoping to have a policy to roll out this week that would work similarly to an eviction ban, using the city’s police department.

Tenant advocates believe Pittsburgh can amend its emergency declaration to add in an eviction moratorium without issue, noting that Harrisburg has not been subject to lawsuits, and constables, who dole out eviction notices, are cooperating.

Gainey, who is a co-sponsor of a bill in the state House that would establish a statewide eviction moratorium, agrees that Pittsburgh can take immediate action by amending its emergency declaration.

“Confronted with an affordable housing crisis, a deadly global pandemic, freezing temperatures, and near-record snow falls, Pittsburgh renters urgently need protection from eviction while we await the passage of a relief package in Washington,” says Gainey.