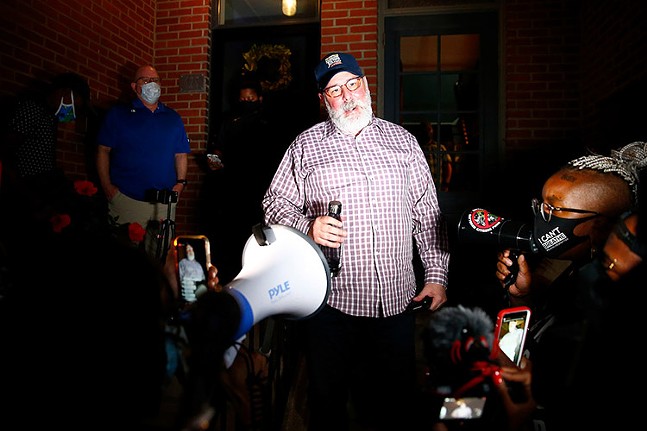 CP photo: Jared Wickerham
Mayor Bill Peduto talks to protesters outside his house on Aug. 19, 2020.
Following the death of George Floyd in 2020, thousands of Pittsburghers took to the streets to protest an all-too familiar occurrence in recent years: another Black person killed at the hands of the police. This was particularly meaningful in Pittsburgh as the city has a history of police using violence against its Black citizens: Jordan Miles, Jonny Gammage, Leon Ford, Romir Talley, Antwon Rose II (“Say. Their. Names.”)

A diverse crowd of residents coming together with citizens across the country to ask its leaders and community to please do something. Anything to help make this racism stop. To please take action and end a broken system causing Black and Brown people to keep dying.

On Thu., Jan. 21, in a tweet while responding to a conservative critic, Pittsburgh Mayor Bill Peduto called “protesters from last year” the “Radical left" and equated them to the "Radical right."

You do realize the Protestors from last year also oppose me?

Interesting to know. Radical right and Radical left joining together.

This happened 90 years ago. It ended up terribly. https://t.co/jQYTAuRqon


This was in response to a tweet from someone with MAGA in his bio, a photo of himself with an arm around a Trump cutout, and a lot of ignorant, Right wing posts, including one pissed off about Steelers wearing stickers for Antwon Rose.

So why is the mayor — someone in a position of power, someone who people in the city should feel comfortable turning to for help — falsely equating protesters asking for the right to simply exist with people who don’t think Black people's lives are important enough to even advertise that right during a football game?

Pittsburgh is already known as one of the unsafest cities for Black women. We have a history of Black men being killed and injured at the hands of the police. We need a mayor who shouts, “Black Lives Matter!” not tweets, "Protesters are Radicals." Black and Brown Pittsburghers deserve more from their mayor.

If this were a one-time occurence, I might look the other way and hope it didn't happen again. (Everyone has typed something on Twitter that has been taken the wrong way at least once, right?) But, I made that mistake once before when reading one of his tweets, and it's time to call Peduto out so it doesn't happen again. In September 2020, he called protesters the “Alt-left,” a term one would more expect from Trump, not the Democratic leader of our fine city.

Politics 101. Have the Alt-Left attack Democrats & the Alt-Right support their efforts. https://t.co/z9w9UxL2bp


Not only did Peduto call protesters extremists, but he used alt-left, a term that has been criticized by hate-speech experts: “It’s just a made-up epithet, similar to certain people calling any news they don’t like ‘fake news,’” said Mark Pitcavage, an analyst at the Anti-Defamation League to the New York Times in 2017.

And protests in 2020 weren’t just about Black Lives Matter, either. They were about trans rights. Workers demanding hazard pay and paid sick leave. Fighting against evictions. Count every vote election voters. Are they the Radical Left, too?

Pittsburgh City Paper reached out to the mayor's office on Thursday afternoon to give him a chance to clarify the meaning of his tweet. We thought that perhaps he'd say, “I’m sorry, I was momentarily upset, remembering the protesters who were outside my house blasting sirens, shining spotlights in my neighbors’ windows all night.”


Private message to Bill: please do not start a hashtag #NotAllProtesters.

Because yes, some Pittsburghers did protest outside of Peduto’s house last year for several days following the arrest of a bike marshal at a Civil Saturdays demonstration in Oakland. (The marshal was grabbed and put into an unmarked white van by rifle-wielding, plainclothes Pittsburgh Police officers.) But during one of those protests outside Peduto’s house, Pittsburgh Police also escalated those events by using pepper spray at close range on the protesters and used apparent kettling. (Witnessed by City Paper staff.)

Maybe, we thought, Peduto would like to apologize and clarify that, while he meant only those protesters as being more radical than others, he also didn’t mean to put them on equal ground with the folks who just stormed the fucking Capitol building, or the man who murdered 11 people of the Tree of Life synagogue less than a mile from the mayor's house.

But the mayor didn't respond. His office said “no comment” to our request.

Thursday’s tweet got considerable heat from local elected officials, Jewish advocacy groups, and Black leaders and organizations. Here are a few of the best posts I saw on Twitter. Their words say more than mine ever could.

State Rep. Summer Lee: “To compare Blk, brwn & other marginalized flks fighting against oppressive systms to actual Nazis of Germany &white supremacists violently staging a coup for poli expediency is not just aggressively wrong. It's harmful & dangerous. It's oppression at work. And I won't stay silent”

Jerry Dickinson: Your lack of judgment is absolutely breathtaking.

Bend The Arc Jewish Action: PGH: Comparing BLM protesters to Nazis is dangerous and offensive. It’s worth pointing out that the first inmates in Dachau were leftists. These false equivalencies are ahistoric and continue to do harm to the Black community.

1Hood Power: A 1967 poll ranked Reverend Martin Luther King as one of the most hated men in America. There’s unfortunately a long tradition of disparaging Black Civil Rights Organizers as radical and dangerous.


Jasiri X: Nothing to see here..Just the “progressive” Mayor of Pittsburgh labeling people who don’t want police officers to brutalize or kill us because we’re Black the “radical left”

So Mayor Peduto, please, please reconsider ever equating the two of these groups again.