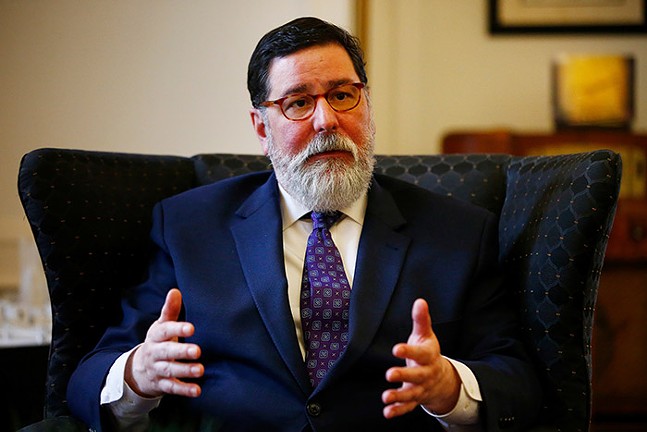 CP photo: Jared Wickerham
Mayor Bill Peduto inside his office at the City County Building on Wed., Feb. 12, 2020.
Last week, Pittsburgh City Paper published a story highlighting Pittsburgh Mayor Bill Peduto’s thoughts on the Green New Deal, a sweeping proposal that plans to move the U.S. off fossil-fuel dependency by spending federal dollars to incentivize and create more renewable energy projects and infrastructure upgrades. Peduto has joined many environmentalists in opposing new petrochemical facilities in the area and wants the natural gas drilling, aka fracking, to wind down in the Pittsburgh region.

However, he has not committed to the Green New Deal, arguing that the proposal hasn’t gotten enough support from unions involved in the fossil-fuel industry. He also opposed setting a deadline for a ban on fracking.

And while Peduto’s potential support for the Green New Deal is important in terms of advocacy considering the size of his bully pulpit, Peduto likely wouldn’t have a role in shaping the Green New Deal since he isn’t a federal official.

When CP sat down with Peduto recently, he shared his thoughts on what Pittsburgh can do to combat climate change, whether that is updating its energy portfolio or encouraging different kinds of development.

He said part of this strategy includes utilizing direct energy, in which energy generation is created onsite instead of at a power plant miles away. Peduto said this helps to keep energy nearby, instead of losing some of it when it is transferred. One of the country’s first direct energy generators is the steam generator near the Carnegie Library of Pittsburgh Main Branch in Oakland. It’s affectionately called the “cloud factory.”

“It is much more efficient because it is not going dozens or hundreds of miles,” said Peduto of direct energy. “The energy just drips off the line, otherwise.”

He said Pittsburgh has partnered with the city of Aarhus, Denmark, which is sharing information on how to build a city-wide direct energy system.

CP photo: Jared Wickerham
Another area of climate change policy where mayors like Peduto can have a direct effect is transportation. Personal vehicles contribute a significant portion to Pittsburgh's greenhouse gas emissions, and cities can play a big role in helping commuters use alternate modes of transportation.

Recently, Peduto advertised an idea for the city to create a new mobility authority with the goal of reducing the number of car users in the city. The proposal garnered the most attention for the possibility of the authority creating aerial trams, something that has been floated about Pittsburgh for decades but was never actualized.

However, Peduto also mentioned to CP about his administration created the Department of Mobility and Infrastructure, which has focused on making the city better for pedestrians, cyclists, and public transit users.

“The very creation of a Department of Mobility and Infrastructure is working towards those goals: the federal and state grants to build the smartest corridors in the world, a multi-modal transportation system that will connect all types of modes to increase accessibility," said Peduto.

But according to census data, public transit use among commuters residing in the city has remained relatively stagnant between 2013-2017, as have bike-commuting and walking rates.

When asked how his administration helps to boost those numbers, Peduto said it could come down to creating a service, through technology, that helps people connect to the different modes of transit, like ride-hailing services, bike shares, and public transit.

“How do you connect bike share to Uber to the Port Authority?” asked Peduto. “No one has taken the next step to where you simply push a button on your phone to help get you where you are going.”

Transit advocates have said increasing functionality and convenience of mobility apps is helpful, but is hardly the biggest barrier to increasing non-car mobility rates.

“You can’t create the mode shift cities are looking for without repurposing infrastructure,” said Jeff Marootian, director of the District of Columbia’s Department of Transportation, to CityLab last year. Marootian said that technology alone won’t get cities to the goal of drastically reducing car-dependency.

One change local transit advocates have been pushing for to help more people commute and travel via public transit is Transit Orientated Development (TOD). The policy encourages dense and affordable development close to high-frequency transit, like busway or light-rail stations. Since low-income residents are less likely to own cars, they would likely ride public transit more often if they lived close to busway stations.

Pittsburgh officials could play a role in encouraging this by altering zoning requirements near busway and light-rail stations as a way to guide developers into building TOD. Zoning requirements could also require certain percentages of affordability at new developments, as the city has done in Lawrenceville.

“We still have this hangover of a hangover that any development is good development,” said Chris Sandvig of PCRG last year. “We have extreme transit dependence along the East Busway. We need to stop building in places where there aren’t people.”

Peduto said the city offers tax credits to developers who build near transit lines, but said he didn’t support a policy to create TOD zoning requirements near high-frequency transit stations.

He said he is supportive of those efforts when they come from the community, citing the Shakespeare Giant Eagle development, which includes portions of affordable housing and fewer-than-required parking spaces. However, some community members have been opposed to that development and some have wanted the affordable-housing requirements and parking restrictions to be more robust.

Peduto said that any zoning variance to spur a certain type of development should come from community members first, not from his office.

“Parts of the city out by that busway where no development is occurring, the community is concerned that any kind of restriction will deter any type of development from ever occurring,” said Peduto. “That is the thing about Pittsburgh: There is no way to do a one-size-fits-all approach. There are hot markets and cold markets.”

Peduto endorsed the city’s current strategy related to zoning, which is more about developers seeking variances for specific projects, than the city laying out guidelines and strategies to encourage certain types of development. He added that the city has worked with certain neighborhoods to help them create their vision of development and streetscapes, like the Homewood Master Plan and a recent community-led plan for Centre Avenue development in the Hill District.

Some have criticized this strategy as confusing and unfair to developers who abide by the current zoning code. Also, Peduto hasn’t always heeded the wishes of community members when it comes to development or projects, like the current opposition to the Mon-Oakland Connector.