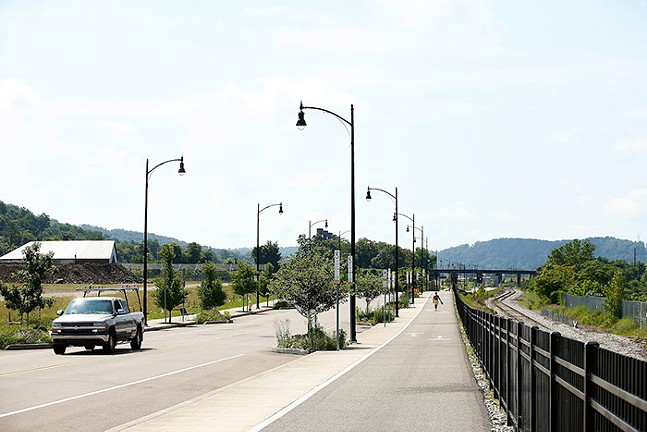 CP Photo: Jared Wickerham
Hazelwood Green in 2019
Mayor Ed Gainey has announced that the controversial Mon-Oakland Connector transit project will no longer involve a shuttle program. The proposed autonomous shuttle service between Hazelwood and Oakland was among the most controversial aspects of the project, generating opposition over the years from residents in Greenfield’s Four-Mile Run neighborhood and public-transit advocates.

“This decision was made in consultation with community leaders and transit advocates,” the city said in a Feb. 16 release. “The revised Mon-Oakland project will no longer support a vehicular shuttle between Oakland and Hazelwood (the Mon-Oakland Connector).”

“Residents have been demanding a real look of what this development means,” Laura Wiens, Executive Director of Pittsburghers for Public Transit told Pittsburgh City Paper in December 2021 when Gainey announced his intention to pause the project once in office. “It would be more effective and efficient and sustainable to use our existing transportation resources rather than build something that would become obsolete.”

Instead, the city of Pittsburgh will prioritize “increased connectivity and equitable transit improvements” in the Boulevard-Bates-Second Avenue Corridor, the release says.

Gainey will hold a community listening session on the project on Thu., Feb. 17.