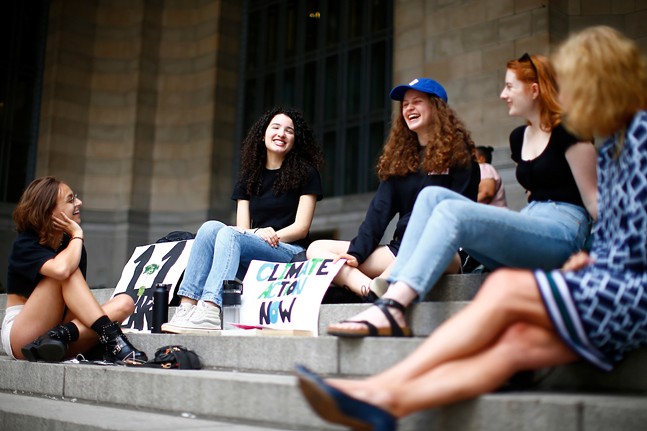 CP photo: Jared Wickerham
Leandra Mira (center) and other students at Fridays For Future climate event in June
Today marks the start of a worldwide effort of young people taking to the streets to demand bold action be taken to address climate change. From Sept. 20-27, participants in more than 150 countries will be protesting to demand an end to the age of fossil fuels as part of the Global Climate Strike.

Yesterday, Pittsburgh Public Schools acknowledged that some of its students would want to participate in the global event, but reminded parents and guardians that students would need to be signed out by a parent/guardian if students want to avoid an unexcused tardy or absence.

The District’s message about tomorrow’s Global Climate Justice Strike is below. pic.twitter.com/WhG4yfYcfO


Pittsburgh Mayor Bill Peduto, as a vocal supporter of environmentalism and action on climate change, tweeted yesterday that he would be happy to sign permission slips for students, and would be doing so at the City-County Building portico today from 12-12:30 p.m.

I will also be signing permission slips for students tomorrow from 12 noon to 1230 on the Portico of the City-County Building. Please bring your printed permission slip. See you there. https://t.co/FDKDzkmbTy


However, it is unclear if Peduto’s signature would actually excuse students. Pittsburgh Public School board member Moira Kaleida tweeted this morning that permission slips must be signed by a parent/guardian to count, not elected officials.

Just to be clear, students can be signed out and have permission slips signed by their parent or guardian. Not random elected officials. https://t.co/KYFKQ8jQAH


According to KDKA, Peduto’s office is unsure if the mayor can legally sign permission slips for students. According to Peduto's public schedule, he will be attending the climate strike starting at noon today. At 9:45 a.m. today, Peduto tweeted a clarification that he will only sign slips that already have a parent/guardian signature.

Agree. I will only sign slips that have a parents signature. They will verify to the school & parent that the student attended the event & was present at the City County Building Portico between 12 noon & 1230PM. https://t.co/geuLeCmzgn

State Rep. Sara Innamorato initially followed Peduto’s lead, indicating she would love to sign permission slips for students wanting to participate in the Global Climate Strike. But this morning she withdrew that statement in response to Kaleida’s tweet, and tweeted she would offer high fives to students instead.

Okay just kidding I *absolutely* will not sign any permission slips but I will definitely high five every student for their tenacity and leadership ❤️ https://t.co/JHDpNhdC7W


Pittsburgh’s Youth Climate Strike will start at Downtown’s Trinity Episcopal Cathedral on Sixth Avenue at 11 a.m. and then participants will march to the City-County Building, where local climate activist Leandra Mira will lead the strike.