may you live in interesting times, at 937 Liberty 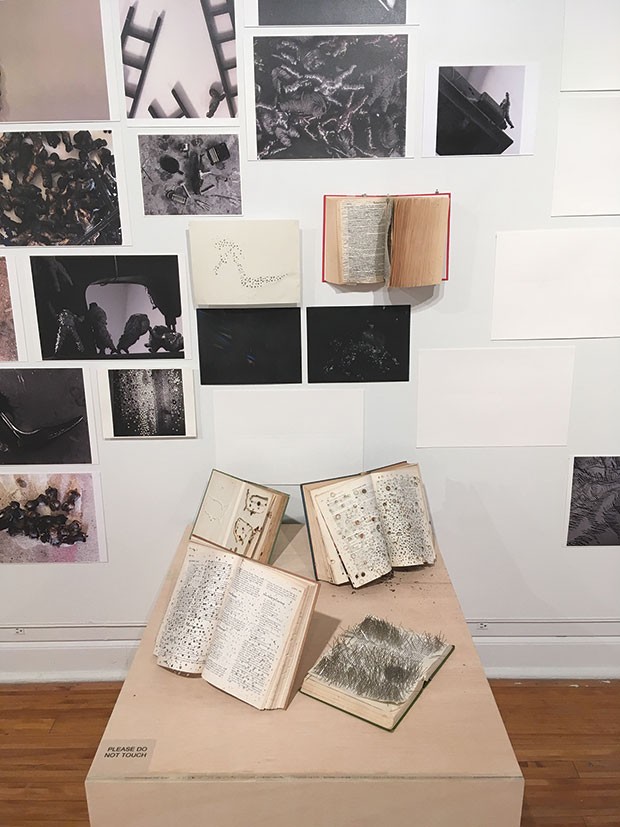 MAY YOU LIVE IN INTERESTING TIMES

may you live in interesting times, exhibited on the second-floor gallery of 937 Liberty Avenue, gathers a handful of new works by three locally based artists to “investigate visual thinking in the new world order.”

The exhibit is curated by Vicky Clark with Casey Droege Cultural Productions, which recently began programming the space. Apart from broadly responding to the show’s directive, these works aren’t particularly connected in intention or aesthetic. Brenda Roger’s “The Resonance of Defiance” dominates one entire gallery wall with focus on pattern and dimension. The latter shows up in triplicate, aided by the standard set of red and blue cels in a frame of cardboard glasses, with a photograph of the headstone of Sister Catherine Cesnik, S.S.N.D., occupying the lower right-hand corner. The pattern is constructed of repeated images of the paraphernalia of mourning and tribute — flowers, candles, prayer cards. It’s nice to look at, and the 3D part is fun, but a bit more biographical context about Cesnik may be needed to let the viewer in. The memorial pillars and novena instructions surrounding her grave are innocuous as hell and give no clue to the brutality that put her there. While audiences don’t want to be pandered to, in this case a bit of prompting would help.

Thomas Waters’ large digital prints examine the strangeness of dolls, imitations of man that can seem alien. Rendered in clear bright hues, mannequins are peered at in close-up, distorted by the aggressive intimacy of the lens, the invasion of the viewer making their manufactured attempts at beauty freakish and threatening. Baby dolls show up, horrifically shrouded in the plastic that protects them between the factory and the store, or head swiveled and short a limb.

The highlight is Sarika Goulatia’s installation work. It’s a visual composed of words, with the pages of books, ravaged by age or war, propped up and open on plain white pedestals, giving way to wall-mounted flat white panels bearing quotes from Gandhi, Stephen Hawking, Milton. Cookbooks have been scorched, attacked, perforated, opened to recipes from Sudan, or pinned down by vise grips grasping roughly at their pages. Images of beauty and peril, guns, shopping carts, hands, omens of doom, flowers, baby carriages, cling to the walls behind the ravaged books. Our sympathies are with them.