Maximum Occupancy: Occupy movement looking to get most bang for protest actions.

"We need some deeper plans." 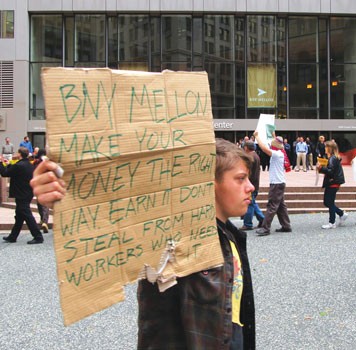 Photo by Chris Young
About 100 occupiers turned out for an Oct. 19 protest outside BNY Mellon, Occupy Pittsburgh's largest rally to date.

David Meieran was working on a laptop inside Occupy Pittsburgh's media tent on Oct. 26 when someone peeked inside to tell him the march was about to begin.

Minutes later, a dozen occupiers -- a few holding signs, a couple banging on drums -- marched from the Occupy Pittsburgh encampment at Mellon Green, Downtown, to the David L. Lawrence Convention Center just a few block away to protest against Marcellus shale natural-gas drilling.

Yet even the demonstrators realized their might was limited that day.

"There are not enough protesters here," occupier Liza Petrelli, 21, of Monaca, said over a walkie-talkie back to camp. "Everybody needs to get out of bed."

More than two weeks into their movement, members of Occupy Pittsburgh are generally pleased with what they've accomplished. They've established a camp site, garnered media attention for many of their demonstrations and, unlike other Occupy movements around the country, they've managed to avoid confrontation with police.

But protesters hope to do more than survive: They hope to bring a measure of economic justice to an economy dominated by corporate interests. And as the weather turns colder, that means a protest strategy that balances quantity and quality.

"We need some deeper plans," says Brandy Duggan, 22, of Florida.

But a similar protest at PNC Bank headquarters on Oct. 25 drew less than half as many protesters, and considerably less coverage. Even a protest against former Massachusetts Gov. Mitt Romney, who many occupiers believe perfectly exemplifies corporate greed, failed to attract many demonstrators just two days later.

On Oct. 27, roughly 30 occupiers braved the cold and rain to protest outside Consol Energy Center, where Romney was holding a Republican fundraiser. After about a half hour, half of the protesters had left.

Some say the poor turnout is partly due to a lack of planning during daily general assembly meetings, where protesters determine future actions.

"I've been frustrated that many of the actions get called at the last minute," says Jackie Smith, a University of Pittsburgh sociology professor who studies protest movements. She is also a member of Occupy Pittsburgh. "We definitely need to get more organized."

Smith expects that to happen soon. She is member of Occupy Pittsburgh's outreach working group, which she says is currently planning larger demonstrations, including a Dec. 10 action set for International Human Rights Day.

"It's better for us to have fewer actions with larger numbers," says Smith. Still, she allows, "it's also good to have constant pressure."

On Oct. 26, for example, five occupiers visited a Downtown branch of PNC Bank, with the expressed intention of opening bank accounts whose interest rate matched what PNC got on its own loans. (At PNC and other banks, savings accounts pay less than 1 percent interest on deposits.) The action caused PNC to close down the branch for the day. While the action ended peacefully -- police arrived but no arrests were made -- the confrontation between occupiers and the bank made headlines.

"It might have been a mosquito swarm," Smith says of the PNC action, "but it gets [the banks] to think about their practices."