At some point you wonder, “What sort of art wouldn’t fit this exhibition’s theme?”

Art exhibits whose themes concern form are pretty common. But Maximum Minimum in Unum, at the Miller Gallery, is headier than most. The show gathers 15 artists, all Carnegie Mellon University School of Art alumni whose work, according to the exhibit program, “eludes maximalist or minimalist classification. They probe or collapse extremes, whether ideological or aesthetic.” As co-curators Josh Reiman and Susanne Slavick put it, these mostly recent works explore the twin paradoxes “more is less” and “less is more.”

The theme is especially reflected in the design of the three-story gallery’s second floor: The dozen pieces there are laid out starkly, with the generally dim illumination setting off the spotlights, blinking bulbs, candied colors or glowing video screens that announce most of the works.

On all three floors, the works run a gamut, from Rebecca Vaughan’s light-heartedly satirical “Lead Pipe Cinch” to Diane Samuel’s characteristically obsessive “Metamorphoses, Ovid.” In the former, a wall-mounted expanse of silver lamé flounces is lightly ruffled by an electric fan and adorned, oddly, with a small movie-poster case with a pink rococo design painted where the poster should be. The vitrine-encased “Metamorphoses” is a coconut-sized sphere that consists of (trust Samuels on this) a single long, balled strip of handmade paper on which she has inked, in fine but legible script, the whole of the Latin poet’s epic, in English. One work’s on the minimal side of maximalism, the other the reverse. Which is which? Discuss. 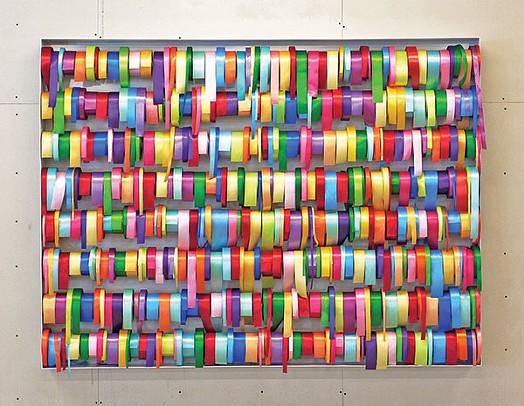 Still, in this exhibit, “eluding classification” and “collapsing extremes” has seemed to put the curators in a meditative, even Eastern, frame of mind. Schneider’s looped video “Burning House” depicts, in long shot, a small building on fire, flames waning and flaring as the scene passes from dawn to dusk. It’s an apparent catastrophe — but seen at great distance; with a droning soundtrack, it mainly inspires contemplation. Likewise Laileh Mehran’s “Entropic System”: a software-guided pendulum, the point of whose metallic ball slowly inscribes geometric shapes in a field of powdered mineral; observe it “live” or at a remove, on a monitor with images from an overhead camera. And you’ll have to slow down to watch Gregory Witt’s “Orbiter,” a sleek, motor-driven installation whose wheeled metal arm laboriously circles a wooden track 5 feet in diameter. By contrast, the ever-changing, kaleidoscopic digital animation of Mehran’s “Dominant Policy” is a trippy mandala whose punchline might take you a second.

A couple works delve deeper, at least emotionally. In Shanna Moulton’s short video “The Undiscovered Drawer,” a young woman mysteriously locked in her apartment finds unexpected treasures in her furniture — various keys to enlightenment that lead her to a kind of transcendence. And Jina Valentine’s “Explication de texte: … SHOT MY SON” and “Testimonies, Disintegration” are wrenching. In wall text, Valentine writes that, given the enormity of the tragedies, she felt herself unable to empathize with mothers who had lost their young black sons to police violence. She attempts to bridge this chasm with “close reading” — like a stack of 1,000 newspapers with the letters of “shot my son” hugely magnified, as though climbing inside the type might help.

Then there’s Ben Bigelow’s projected-video installation “Unnecessary Mountain.” The episodic video depicts three protagonists, including a filmmaker (seen shooting a film about three teens on a beach); a guy in a ski helmet running frustratedly around some woods at night, followed by a camera crew; and man alternately trapped in a garage (where he is surveilled) and standing outdoors, and in both cases obsessed with his own crotch, which he examines with a telescope before using sunlight and a magnifying glass to burn holes in a crude drawing of male genitalia. These sections alternate with drone footage of mountains, accompanied by a male voiceover speaking such banalities as “My goal is, always give 110 percent.” At one point, the screen goes dark and, in the gallery, lights flash, a siren sounds and a fog machine blows smoke.

Fascinatingly Matthew Barneyesque in scope and feel, and as much as a half-hour video can be, “Unnecessary Mountain” is maximalism if I’ve ever seen it.