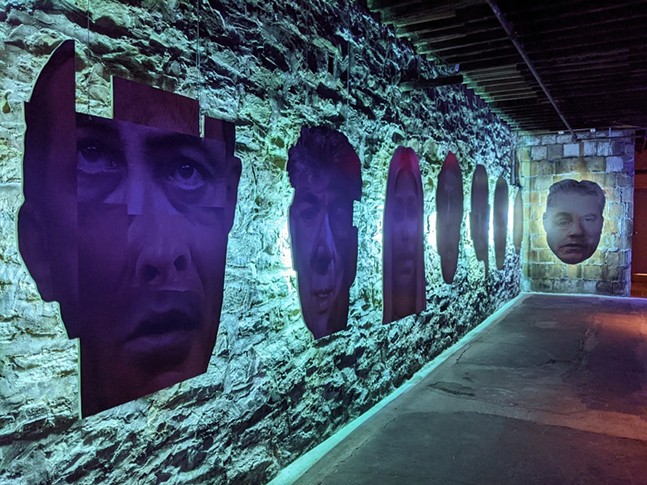 Stepping off the elevator onto the fourth floor, I'm greeted by an upside-down, headless, spinning horse sculpture, part of Stanislav's installation.

In her bio, Stanislav — a Russia-born artist who splits her time between St. Petersburg, New York, and Bloomington, Ind. — says her work "mines cultural histories to question and reflect the present and future through a lens that melds beauty, horror, and the unexpected." This comes through in "Surmatants – Mars Rising," a large-scale, 360-degree video piece that circles visitors with scenes of local folk dance group the Tamburitzans in traditional garb reminiscent of the hit 2019 horror film Midsommar.

These are interspersed with shots of industrial ruin around Pittsburgh, providing a gorgeously choreographed, shot, and edited commentary on the sacrifice made by Slavic immigrants forced to abandon their culture in order to work in local steel mills and assimilate to U.S. customs.

CP photo: Amanda Waltz
Andréa Stanislav at Mattress Factory's Factory Installed
Because of the way the projections work, visitors cast shadows on the film, making them part of the footage. In this way, Stanislav begs the question of how we all lose cultural ties to the demands of capitalism and progress, in effect becoming more homogenized over the generations.

This dizzying work is complemented by Luftwerk, whose installation "Open Square" recalls aesthetics familiar to 1960s and 1970s science fiction. Visitors are drawn in by geometric shapes and lights that shift and change the searing, neon colors of the room, like a carnival funhouse by way of 2001: A Space Odyssey. This, combined with the works of Stanislav, give the fourth floor a Twin Peaks vibe intoxicating in its dreamlike weirdness and hyper-sensory indulgence.

CP photo: Amanda Waltz
Luftwerk at Mattress Factory's Factory Installed
Visitors will find a respite in Chutiwongpeti's "Wishes, Lies and Dreams >> The Journey into the Invisible World," which offers a minimalist palette cleanser to its gallery mates. But the various elements — including a massive, suspended wood sculpture and antique sewing machine — offer their own subtle surprises. The sculpture acts as a Jules Verne-like spacecraft made of reclaimed barn wood and the sewing machine defies its true purpose by acting as a video console, culminating in a work that imagines more potential in the mundane and discarded. This plays into the description of the work as questioning what happens when life ends, as the rescued materials find immortality through reinvention.

CP photo: Amanda Waltz
Sarawut Chutiwongpeti at Mattress Factory's Factory Installed
The third floor offers the shiny streamers, award plaques, and bedazzled sashes of "Society of 23's Trophy Game Room" by Songco. The highly detailed installation constructs a fake fraternity occupied by the artist playing multiple "brothers," the methodically decorated space — with its Instagram-ready posed photos, mall fashion, and beer pong kit — acting as a shrine to their various fake accomplishments and fake exploits. Based on Songco's own experience as a college frat member, the piece uses that world to explore how the desire to belong requires a denial of one's self, especially in American culture. (In a previous Pittsburgh City Paper article, Songco discussed how he struggled with his identity as a Filipino American who identifies as gay.)

CP photo: Amanda Waltz
Jeffrey Augustine Songco at Mattress Factory's Factory Installed
Last but not least is Tati's "A New Tomorrow That Starts Today." With its giant, back-lit faces, all of which are composed of the Frankenstein'd together features of various world leaders, and central video work, the installation takes full advantage of its dark, moody basement surroundings.

The piece uses elements of comic book culture to explore the idea of how controversial political figures, including former U.S. President Donald Trump, Russia's Vladimir Putin, and Israeli prime minister Benjamin Netanyahu, are either lionized or villainized by citizens. This comes through in Political Mutants, a 1984-like video featuring a pair of disembodied lips reciting edited monologues from various comic works, as well as a series of rubber masks that would not look out of place in a display of superhero Halloween costumes. The work compels with its grotesque imagery and questions about how world politics are ruled by Cults of Personality. (It should be noted that the video comes with corresponding footage of an American Sign Language interpreter, which I found to be a thoughtful touch.)

The Mattress Factory has seen a major shift over the last few years, shaken by controversy, the subsequent departure of its longtime leader, and reorganization. Despite this, the North Side space has managed to deliver some exciting shows, including the Jennifer Angus and Shikeith exhibitions currently on view at its Monterey Annex. With this latest crop of Factory Installed works, the museum has clearly not missed a beat.