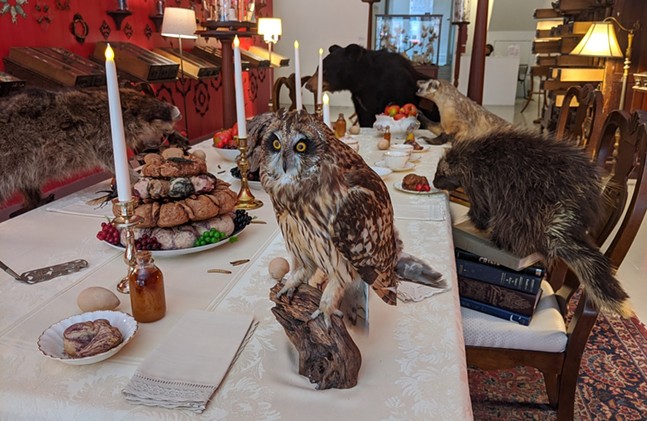 Before even walking into the small, multi-story gallery space, I'm met with two storefront windows packed with rows of colorful jars, all lit up by the afternoon sun. These jars, part of The Museum of All Things, resemble quaint, home-canned jellies, all sealed with bee's wax and handwritten tags, their folksy appeal dashed by the many dead bugs suspended in their jewel-colored contents.

The jars — of which there are many — serve as an introduction to the macabre delights that await on the Annex's first floor, which has been transformed into a box of curios right out of the imaginings of a mad taxidermist or eccentric entomologist. In a press release, Angus, a Canadian born artist who teaches at the University of Wisconsin-Madison, says she feels “an urgency to continue to make work that draws attention to some of our planet’s lowliest creatures for, simply speaking, without insects man cannot survive.”

Using specimens from Trundle Manor, the Carnegie Museum of Natural History, and individual donations, the show — which MF interim executive director, Hayley Haldeman, says took three weeks to put up — is all pulled together by magenta walls bursting with circular and skull formations made of pinned cicadas, weevils, and small beetles. At the center of the room is a table set for a party of stuffed native Pennsylvanian wildlife, including a bear, owl, and porcupine, stuck forever in mid-dinner conversation. 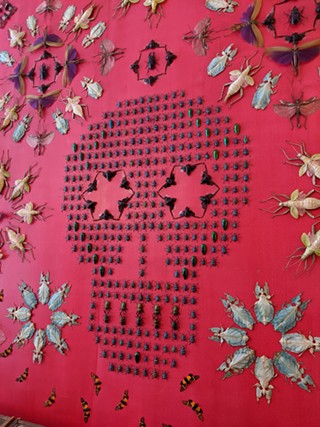 Bug wall, part of The Museum of All Things by Jennifer Angus, now at the Mattress Factory

Surrounding them is a dizzying array of microcosmic scenes trapped beneath delicate glass domes or in the small, rectangular drawers of antique storage cabinets. The latter depicts little narratives, with a variety of insects playing out stories of war, worship, and pleasure, all intricately detailed and accented with dried flora and found objects like cake toppers, Monopoly pieces, and dollhouse furniture. The stories they tell range from the haunting to the winkingly absurd, including one box where a group of bugs admires their own displays of impossibly tiny, pinned butterflies.

Connecting the show with Angus' mission brings to mind the years of damning news about declining bee populations and the decimation of other pollinating insects, without which humankind's food supply would suffer. But more than that, the carefully posed scenes recall how human desire and habits are often projected onto bugs and animals, and how doing so denies a creature its true nature and role in an ecosystem. By questioning this practice, which has played out in countless films, books, and other media for generations, we can begin to truly understand the natural world as opposed to relating to it through forced perceptions.

Where The Museum of All Things is antiquated and extravagant, Feeling The Spirit In The Dark is sensual and minimal, defined by blue neon, dimly lit rooms, and inviting sounds. Walking up the narrow stairway as distant music plays evokes the feeling of entering an underground nightclub, a welcome feeling after months of being stuck at home by the pandemic. From there, the second floor offers surprises tucked away in various rooms. It's impossible not to gasp walking onto a small runway, only to see ripples disturb what you thought was a slick, black floor. Another room takes on the appearance of a sort-of altar and confessional, the walls decorated with overlapping photos of Black subjects. 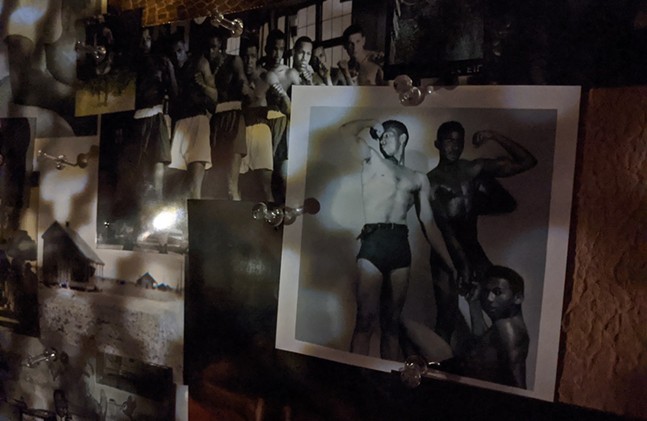 CP photo: Amanda Waltz
Feeling The Spirit In The Dark by Shikeith
Under all the mood lighting and sexy jazz music, however, is the artist's stated mission to explore how Black male bodies are defined “within a society that denies these men their erotic and reconciliatory potential,” and by the violent legacy of slavery. This comes across in the repeated use of water (meant to represent the Transatlantic slave trade), sexual imagery, and the color blue (besides the neon, Shikeith uses haint-blue, a type of house paint most commonly used in the American South to ward off spirits, and originated in African American Gullah culture.)

In the confessional, some photos depict more traditional masculine images of Black men in performative boxing stances or flexing, while in another, a man poses in a dress and slingback shoes, smiling widely at the camera. These contrast sharply with one of an older Black gentleman in period clothing, his eyes rolled far back into his head, his mouth agape, serving as a chilling reminder of the horrors, both past and present, inflicted on Black Americans.

Another set of stairs leads to a room where the only source of light comes from clear, glass phalluses hanging from the ceiling, a none-too-subtle comment on the truly fragile, easily shattered state of masculinity. (It also points to Shikeith's talent as a glass artist, which was on display last year in the August Wilson African American Cultural Center exhibit Familiar Boundaries. Infinite Possibilities.)

Regardless of how you view the two exhibitions, there's no doubt that they are an exhilarating one-two punch and welcome tonic after months of artless isolation.Mattress Factory. 500 Sampsonia Way, North Side. Due to the coronavirus pandemic, all visitors must purchase tickets online in advance at mattress.org