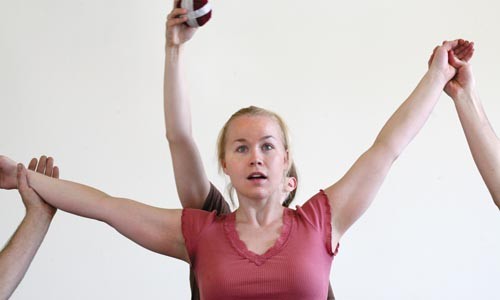 Soprano JoEllen Miller rehearses with dancers from Attack Theatre.
Some operas begin with a powerful backstory -- court intrigue, star-crossed lovers, mythical sagas, and so on. But the new opera RedDust: Portraits, Dreams & Prayers, the brainchild of Pittsburgh-based composer and University of Pittsburgh music professor Mathew Rosenblum, was born with a sound.

"I didn't really have a plot," he says. "I had a sense of what the sound would be, namely that I wanted surround-sound speakers encircling the audience, and instruments on either side of the audience. I had a general feel for it acoustically."

It's not out of character for Rosenblum to approach writing an opera from such an angle, given his background in the avant-garde. A New York City native, he attended Music and Art High School in Harlem in the same class as Knitting Factory denizens Anthony Coleman and David Krakauer. At the New England Conservatory, Rosenblum studied sax and improvisation with jazz legends like Jaki Byard and George Russell, before switching to the New Music realm of modern composition.

After coming to Pitt in 1991, Rosenblum joined colleague Eric Moe in programming the Music on the Edge series, which still quietly brings new chamber music to auditoriums in Oakland. Meanwhile, he established a rep for high-minded compositions, released on such classical labels as CRI and Mode. (He's currently readying a CD with the Raschèr Sax Quartet and the Boston Modern Orchestra Project for New World Records.)

Paul Hostetter, conductor of the Sequitur group in New York, another modern orchestra, catalyzed the commissioning of RedDust, along with the Opera Theater of Pittsburgh and the Miller Theatre at Columbia University.

And it's truly a multimedia presentation in the current sense -- complete with a storyline based on narratives drawn from Gertrude Stein and a lengthy Chinese novel by Tsao Hsueh-Chin called The Story of the Stone. Rosenblum, who triggers his own samples in the piece, will be joined by Attack Theatre dancers and a New Music ensemble. The 19-piece group includes Sequitur members, the Music on the Edge core group, former PNME trombonist Glenn Wayland, and members of the Pittsburgh jazz fringe including Colter Harper, Ben Opie and John Purse.

Another integral element of RedDust is video art by Kurt Ralske, whom '90s alterna-rockers might know from his albums as 4AD's Ultra Vivid Scene; IDM fans might recognize him from Carpark Records' video-improv trio, 242.pilots.

"Toward the beginning of the process I knew I wanted to work with Kurt," says Rosenblum. "I posted a notice on a Web site called Eyecandy, where VJs discuss their gear. Kurt was the only one who knew about Messiaen and Morton Feldman, so he was obviously a musician. I found out about his work with Elliott Sharp. He was definitely the right guy."

Ralske will be manipulating the words in the libretto along with images from the 1930s. "He's been writing programs that deal with images and texts that can be improvised in a live situation, so he'll have a whole bag of tricks that he can use in a live performance."

They'll need all their energy and talent to pull off a labor that, by Rosenblum's own admission, was difficult to put together. "I had never written an opera before. When [Opera Theater director] Jonathan Eaton and I started working seriously on it, that was when it really took off. We spent close to 200 hours on the libretto. I had all my sources, but he helped refine it and put a dramatic focus on it. I never really imagined working in music theater, so it's been learning experience."

With an almost John Zorn-style postmodern intensity, the music of RedDust will veer from section to section, encompassing everything from jazz to electronica to microtones. "There are elements that almost border on Broadway, but then there are others in the opposite direction. One end of the spectrum is narrative, and the other is abstract.

"To the last minute, we're still trying to figure this thing out," he continues, noting that a video crew has been hard at work documenting the making of the opera for a DVD. "I don't know if I succeeded -- the jury is still out, because I don't have any distance from the piece. There are a lot of different sensibilities involved, but I trust everyone."