Revival, a new show by Matt Hunter at 3G Gallery, showcases 34 new works by the painter, who lives in the West End and regularly has shows throughout Pittsburgh's East End. Hunter, a native Pittsburgher, studied at the Pratt Institute in New York before returning here 10 years ago.

For much of that decade, Hunter has worked as an artist, and the inspiration for Revival was his own comparing-and-contrasting with his work from the start of that time period. The forms and themes he explores here are ones he last explored when he was in New York. The older work isn't part of the show, although it would've been interesting to see both side by side.

Hunter had an early interest in comic books, and that stylistic influence is visible in his sketches and paintings. You can imagine it's where he gets his knack for detail. Still, many of the paintings in Revival come together through a combination of that precision of imagery and a more abstract use of color and brushwork. 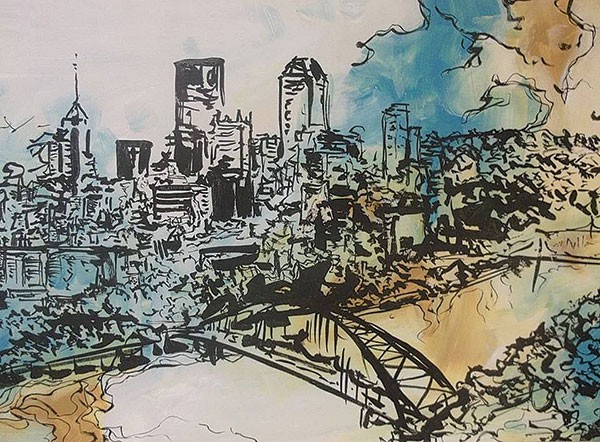 For instance, part of the retrospective that inspired the show involves Hunter's fondness and appreciation for Pittsburgh, and many of these pieces employ as their foundation a recognizable part of the city: Step back and a swarm of sharply angled strokes becomes the city skyline, or a fountain you might recall from Baum Boulevard. But the images are surrounded by, and completed with, billowy, half-cloud-half-wave shapes in blue, black, white and yellow. They're fluffy and pleasant, but not without a sense of turbulence.

Hunter says the strokes and colors in the series were meditative for him. Chronicling the passage of time was an important part of what he set out to do, and many paintings contain a solitary number, as if to suggest the idea of a ticking clock. He says the work came to feel like a form of journaling for him.

3G Gallery is a small space on the ground floor of the Westin Convention Center hotel. You can see more of Hunter's work by following him on Instagram @jackingyourkicks