Material World, a new exhibit featuring six artists from around the globe, opens at the Pittsburgh Glass Center

Courtesy of the artist
Joseph Cavalieri’s “Barbie Descending the Staircase”

Kneel and pray at the altar of Chanel No. 5.

Stunning luxurious stained glass windows bearing the names of designer perfume and clothing brands hang on a wall at the very back of Pittsburgh Glass Center’s Hodge Gallery. Before the Chanel and Louis Vuitton windows sit two altars and two church pews. On adjoining walls, neon signs light up with vibrant messages of “PRAY” and “REPENT;” underneath, there's a lineup of nine designer bibles, all made of kiln-formed glass.

It’s the work of Indiana’s Slate Grove, one of six artists from around the world whose glasswork is displayed in Material World, a bold new exhibit commenting on “consumerism, luxury, obsession, and materialism.” 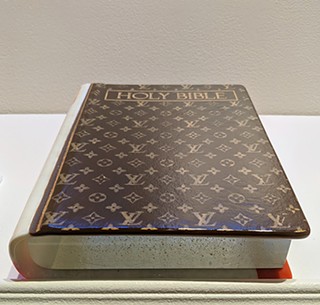 Lean in closer and you’ll find that inside of Grove’s beautiful Versace, Gucci, and Givenchy branded covers, his bibles are nothing but empty, transparent glass. Don’t judge a book by its cover; but, with such beautiful glasswork, how can you not?

From the moment you enter the gallery, you’re surrounded by material goods that consume so many of us. In the entrance sits Morgan Peterson’s “Once Upon a Crime, The American Epidemic,” an alarming, oversized drug scene with a startlingly large blown glass needle, an Oxycontin prescription bottle, and a steel spoon, set on top of mirrored flooring. At first, it appears that the drug scene itself is the only commentary. But beneath the spoon lies an extra large American Express card, and on it, a name: Martin Shkreli, the former hedge fund manager who drastically raised the price of antiparasitic drug Daraprim for personal gain.

On a podium a few steps away sits Peterson’s “Designer Drugs,” a Chanel logo gracing the top of glass-blown pills and a razor blade, each imprinted with the trademark grooves of a Chanel purse. Designer purses are a theme throughout this exhibit, which, apart from Shkreli, seems to primarily critique the stereotypical superficial purchases of women more than men.

Korean artist Hyesook Choi’s “Treasure Your Inner Beauty,” for instance, is a set of small core-cast colorful glass balloons, each with a clear item set inside the orbs. Through the air bubbles, if you lean in close enough, you’ll see something new in each: a woman’s face, a tube of lipstick, and yes, a designer purse. The artwork is intriguing and having to get up close to appreciate it only makes it more engaging. But would it be too hard for at least one artist to design a glass mustache comb?


Glass, however, is the perfect medium for a show centering on materialistic possessions. One can’t help but recognize the fragility of the pieces when exploring the exhibit, and how easily each could break. For one, Canadian artists Karina Guévin and Cédric Ginart’s flameworked glass pieces, with intricate joyful characters that must be seen in person to fully appreciate, stand tall on podiums in the center of the room. Viewers during the opening tiptoed around them, often afraid to get too close.

Then, when you do move in to get a closer look at the pieces throughout the gallery, it’s quite jarring to see your own face staring up at you in the reflections of the glass, suddenly making you part of the exhibit. Busted! You too are a consumer, on display.

One standout in the show is New York City artist Joseph Cavalieri’s hand-painted stained glass artwork, taking well-known pop-culture references like Barbie dolls and Alice in Wonderland and sets them in a modern landscape. In “Smokin Alice,” the girl balances a cigarette in one hand and a leash holding four texting white rabbits in the other. In “Barbie Descending the Staircase,” Cavalieri has the thin doll grasping a Fritos bag. In an exhibit commenting on consumerism, it’s a reminder that even those of us without wealth can also be subjected to guilty pleasures.

Or maybe it just says that Barbie is underfed and hungry. Either way, the piece is quite lovely, and the doll’s face at being spotted holding the bag of corn chips is how I felt when leaving the exhibit: exposed, vulnerable, and wishing I could afford the $1,800 price tag to take that piece home with me. Like I said, busted.